"Provided I Can Fuse on Ground Which I Think is Right": A Lincolnian View of the White House History Conference

Allen C. Guelzo is Director of the James Madison Program Initiative on Politics and Statesmanship and Senior Research Scholar in the Council of the Humanities at Princeton University. An Organization of American Historians Distinguished Lecturer, he is the author most recently of Reconstruction: A Concise History (Oxford University Press). 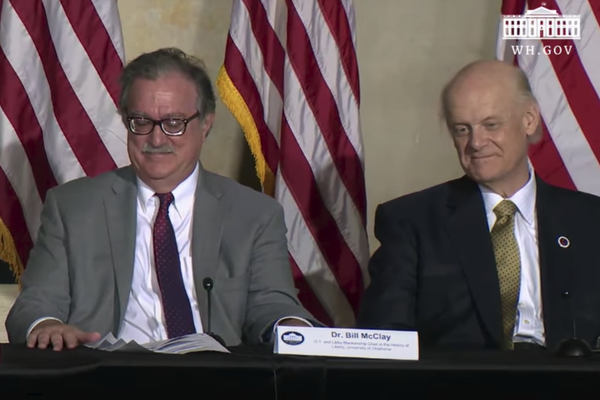 Some friends have importuned me for an explanation of why I joined the panel that spoke at the National Archives as “The White House Conference on American History” on September 17th. Having been engaged in teaching the subject in various ways for forty years, I can say bluntly that I am not happy about its present condition. That I would say so at the behest of the White House set off an overabundance of anxiety in some quarters and over-congratulation in others, and mostly about the fact that the Vice-President and President spoke on the same subject later in the event. I am not sure what the cause of either the anxiety or the congratulation was, since my comments, of course, were not directed to the President or Vice President, or made in consultation with them. I have never even met the former, and the latter only once, at a reception.

The issue for me was history education; and if I anticipated causing upset, it was more for making no secret of my conviction that the Enlightenment universalism of the Founding, the Declaration and the Constitution is a remarkable and exceptional moment in human history, or for my resistance to the worrisome versions of tribalism which I see bidding to replace it. I am not ashamed to say that I am a Lincolnian on this point, and subscribe myself fully to Lincoln’s opinion. In 1858, he said that half of Americans then alive had come from some place other than the United States. “If they look back through this history to trace their connection” to the American Founding strictly “by blood,” then “they find they have none.”

But when they look through that old Declaration of Independence they find that those old men say that “We hold these truths to be self‑evident, that all men are created equal,” and then they feel that that moral sentiment taught in that day evidences their relation to those men, that it is the father of all moral principle in them, and that they have a right to claim it as though they were blood of the blood, and flesh of the flesh of the men who wrote that Declaration, and so they are.

The fact that Americans have not always lived up fully to that Enlightenment universalism, or that ethnicity has often gotten bloodily in the way of it, merely shows that we are human, not that it is wrong. Lincoln again:

I do not see that aspiration represented in much of our history teaching today. I complained, in my panel comments, that to look through the tables-of-contents of our flagship quarterlies is frequently to encounter a witches-sabbath (and Night on Bald Mountain was thrumming in the back of my mind as I wrote that) of complaint about injustices, deportations, genocides, failures, co-optations, and miseries. Unhappily, I am not alone in this lament. As David Hackett Fisher complained years ago, we have made “the American past into a record of crime and folly” and told ourselves “that we are captives of our darker selves and helpless victims of our history.” Perhaps this fulfills a certain Puritanical gene in our national make-up which is never entirely happy unless we are unhappy; perhaps it’s because human nature is drawn to misanthropy and outrage because it makes us feel so powerful; or perhaps it’s an illustration of what Tocqueville observed when he said that the nearer we approach genuine equality, the more screamingly intolerable the remaining inequalities feel. I am not equipped to decide which of these preponderates in every case, but I see a good measure of each in the squinting vision that pervades our profession.

In my comments, I was particularly severe on critical theory, and especially critical race theory, which strikes me as indulging precisely the same circular reasoning as the Calhounites long ago, with the same appeal to the supremacy of “community” (that was Amos Kendall’s word in shutting down the circulation of abolitionist literature in the mails in the 1830s) and race. It’s that circular reasoning which leads me to reject the theorists’ despair; nor does their despair carry much persuasion when I hear it coming from people who, in flat contradiction of despair, occupy positions of prosperity, privilege, influence and (yes) property which would otherwise be the envy of the preceding three thousand years. Adorno thought that Enlightenment reason discards difference and thus victimizes two-thirds of the world’s population. The very point of the Enlightenment was that reason understood difference, and saw difference as the cult-goddess of violence.

I don’t deny that academic historians always run the risk of being manipulated, infantilized and traduced, especially by the political classes. But if, to avoid that, we say nothing except to ourselves, then I think we forfeit what we owe to the history we purport to serve. And I do believe we have a responsibility as historians, both to those who cannot speak from the past and to those whom we teach, a responsibility not to wallow in guilt or drag others into the wallow, and it does not seem to me at all unreasonable to ask what souls we are forming as we teach. If we laugh at honor, we should not then profess shock when mass murder is perpetrated. I do not think it wrong to ask myself whether what I say builds up, or destroys; whether it would strengthen the resolve of some eighteen-year-olds to storm Omaha Beach, or whether it would incline them to sell nuclear secrets for the first offer in spot cash. History is an art that holds off dissolution; it should improve life rather than debasing it.

I have no sympathy whatsoever with the pompous foolishness which argues that all Americans have been right, valiant, brave, noble, innocent, blue-eyed and pure. But the myths of the mindless patriots on the Right are not worse than the myths of the mindless cynics on the Left, and I do not need to explain that it is the Left that dominates in our profession. I suppose that this will invite the accusation that I am merely bourgeois. Very well. Susan B. Anthony was bourgeois, Frederick Douglass was bourgeois, and Lincoln was certainly the most bourgeois of all.

So, I will take the opportunity of any platform offered me short of outright tyrants, depraved fools and genocidal murderers to talk about American history -- I have done that for Dinesh D’Souza and was roundly condemned for doing so; I did it for the World Socialist Web Site, and was roundly condemned for doing that, too. I think I can do both without being either a Trotskyist or a D’Souzaist. Lincoln once more: “I have no objection to ‘fuse’ with any body provided I can fuse on ground which I think is right.” I would be just as willing to do so as an officer of the American Historical Association, except of course, that I was told by the chair of the committee on nominations years ago that people who thought like me were not wanted. So much for diversity and inclusion.

What is the way forward? That is the question I wish more people would ask. I begin with a comment John Cheever once made in Falconer, about “the inestimable richness of human nature” -- that we are tragic, selfish, and cruel, and yet capable of great vision. I then would take us to the foundations of law -- divine, natural and positive – and superimpose the conviction that the American democracy opens up for us, in a way seen in no society before 1776, the chance to fight for the natural rights with which we have all been endowed. Next, I would find in the American experience the rejection of tribe -- of blood, soil, and kings -- and the achievement, more than in any previous epoch, of happiness, of eudaemonia. To write this story, I would borrow a rule from John Gardner (from whom I have borrowed a lot): there is no true compassion without will, and no true will without compassion. And the last word should be from Sgt. William Carney: “The old flag never touched the ground, boys.”