Jeff Roquen is an independent writer and PhD candidate in the Department of History at Lehigh University (Pennsylvania, USA). His social justice blog KleosTimes can be found at http://kleostimes.tumblr.com/ 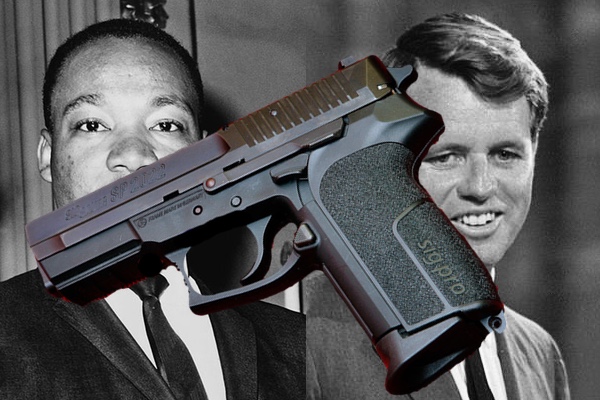 During the Cold War in the 1960s, the wide availability of guns in America and the proliferation of military armaments abroad produced an unparalleled nexus of violence. In the wake of the tragic assassination of Civil Rights leader Martin Luther King Jr., Americans, for example, could have exercised their rights as citizens - at any point - to nullify the Second Amendment with a new constitutional amendment in order to fully protect “life, liberty and the pursuit of happiness.” Yet, the “right of the people to keep and bear arms” remained the law of the land. What if the United States had acted otherwise? Asking the hypothetical question “What if” and considering the alternative outcomes in a counterfactual history of the era should give pause to - and haunt - every American today.

What if Martin Luther King Jr. Had Lived?

On 4 April 1967, Civil Rights leader Martin Luther King Jr. appeared at the Riverside Church in New York City to deliver an address entitled “Beyond Vietnam: A Time to Break Silence.” For years, King had refrained from publicly criticizing Johnson on Vietnam due to his support for the Civil Rights Act of 1964 and the Civil Rights movement. Yet, he could not remain silent any longer as his “conscience (left him) no other choice.” What had been accomplished after years of bombing and American-led military campaigns? Nothing. Nothing except human and cultural devastation. As such, he proceeded to unveil a five-step plan to end the war that included setting a date for American withdrawal - to which the church applauded in agreement. “Surely,” King implored, “this madness must cease.”

In denouncing America’s support for dictators around the world to stave off popular uprisings out of fear of communism, he then told the congregation: “It is with such activity that the words of the late John F. Kennedy have come back to haunt us. Five years ago, he said, ‘Those who make peaceful revolution impossible will make violent revolution inevitable.’” He was right. Not only was America on the wrong side of history by failing to embrace international liberation movements but - more alarmingly - the core values of American democracy were being dangerously compromised from Cold War militarism. In a modern jeremiad, King concluded “A nation that continues year after year to spend more money on military defense than on programs of social uplift is approaching spiritual death.” At the conclusion of his stern judgment, a clamorous ovation rose from the pews. From that day, the young Civil Rights leader began to construct a new socio-economic justice platform to eradicate the twin maladies of violence and poverty. The result was the launch of a “Poor People’s Campaign” and a visit to the state of Tennessee in 1968.

The weather forecast for Memphis was quite typical for the third week of March - rain with a high of forty-five degrees. To the utter surprise of everyone, however, nearly seventeen and a half inches of snow fell over a three-day period. As a result of “Snowmeggeden 68,” King was forced to call off a protest in support of 1,300 striking city sanitation workers who neither possessed a living wage nor enjoyed union recognition. Four days earlier, he had electrified a crowd of more than fifteen thousand in support of the strikers by praising their quest for both civil rights and human rights. To the inspired gatherers, he thundered: “America is going to hell (if it) does not use her vast resources of wealth to end poverty and make it possible for all of God’s children to have the basic necessities of life.” Indeed, the plight of the sanitation workers reflected a profoundly disturbing reality in the United States. While the U.S. government financially sustained hundreds of thousands of American soldiers in Vietnam at an exorbitant cost, millions of Americans were living lives consumed by poverty, misery, and hopelessness at home.

King departed Memphis for Atlanta before returning to the city on Wednesday, 3 April for another rally for the sanitation workers at Mason Temple Church. In framing their struggle within the New Testament parable of the Good Samaritan, he exclaimed “The question is not, ‘If I stop to help this man in need, what will happen to me?’ The question is ‘If I do not stop to help the sanitation workers, what will happen to them?’” At the end of his impassioned address, King courageously cast fear aside and confessed:

Like anybody, I would like to live a long life. Longevity has its place. But I'm not concerned about that now. I just want to do God's will. And He's allowed me to go up to the mountain. And I've looked over. And I've seen the Promised Land. I may not get there with you. But I want you to know tonight, that we, as a people, will get to the Promised Land!”

While standing on the balcony of his Memphis hotel the next evening, King was fatally shot by career criminal James Earl Ray with a Remington rifle. As news of the murder reached incredulous American ears, the nation went into shock - and then rage. In cities and towns across the country, including Baltimore, Chicago, Kansas City, and Washington, DC, the frustration and anger over the assassination of the beloved Civil Rights leader led some to riot. For most people, however, it was a time to quietly mourn, to shed excruciating tears, and to find the courage to move forward.

In an address to members of the Cleveland City Club in Cleveland, Ohio the next day, anti-war, Democratic presidential candidate Robert F. Kennedy placed the assassinations of King and his late brother - John F. Kennedy - into the context of a larger, national pathology in what he called a “mindless menace of violence” that pervaded the country. For the younger Kennedy, violence in the United States, particularly gun violence, transcended politics and begged a solution. He poignantly told his audience: “It [violence] is not the concern of any one race. The victims of violence are black and white, rich and poor, young and old, famous and unknown. They are, most important of all, human beings whom other human beings loved and needed. No one – no matter where he lives or what he does – can be certain who will suffer from some senseless act of bloodshed. And yet it goes on and on.”

What if Ray had been unable to acquire a firearm due to strict federal laws against the ownership and possession of guns? If King and his campaign had survived, their anti-war voices might have swung the 1968 election to Kennedy, and the United States would have withdrawn from Vietnam. By the time of his death, moreover, King had forged an impressive coalition of activists in his Poor People’s Campaign, and it is entirely possible that poverty in America today, which victimizes 48 million citizens, would be far less in number if he had been able to join forces with Kennedy - who would also die from an assassin’s bullet two months later.

Since 1968, more Americans have been killed by firearms in the United States (1,384,171) than from combat in all major wars since the American Revolution (1,171,177).   It is unsurprising. America is awash in guns. Despite comprising only five percent of the global population, Americans possess from thirty-five to fifty percent of all the privately-owned guns in the world. Consequently, they are twenty times more likely to die at the hands of a gun and are more subject to being terrorized by firearms in public than people elsewhere. Since twenty year-old Adam Lanza gunned down twenty children and six adults with an array of semiautomatic weapons at the Sandy Hook Elementary School in Newtown, Connecticut in December 2012, there have been no fewer than thirty-four (34) school-shootings in the United States. Those victims are included in the more than 30,000 Americans who die annually from domestic gun violence.

Why? Why do Americans refuse to challenge and overturn the Second Amendment to eliminate the greatest threat to their security? In 2007, strict restrictions on gun ownership in Japan and South Korea – amounting to a virtual ban - resulted in eleven (11) and fourteen (14) lives lost from gun-homicides respectively compared to 9,146 gun-homicide deaths in the United States. Instead of curbing the number of guns, the United States Congress allowed a 1994 ban on assault weapons to lapse in 2004, and the same high-powered firearms used by Adam Lanza in the Sandy Hook-Newtown massacre are now widely available for purchase.

What if Americans revisited the words and the deeds of Martin Luther King Jr. and Robert F. Kennedy and sparked a movement to support a new amendment to the Constitution prohibiting private gun ownership and charging the federal government with the task of halting the manufacture, trade, and importation of firearms?

Until concrete action is taken for peace, we Americans wait. We wait for the next round of fatal gunfire on a city-block, in a park, or in a shopping mall. And we wait for the next school-shooting. It is not a question of if but when, and no one is safe anywhere or at any time.

Surely this madness must cease.