How We Told the Ongoing Story of Title IX

Laura Mogulescu is Curator of Women's History Collections for the Center for Women's History at the New-York Historical Society. The N-YHS's exhibition "Title IX: Activism On and Off the Field" opened May 13 and will run until September 22. 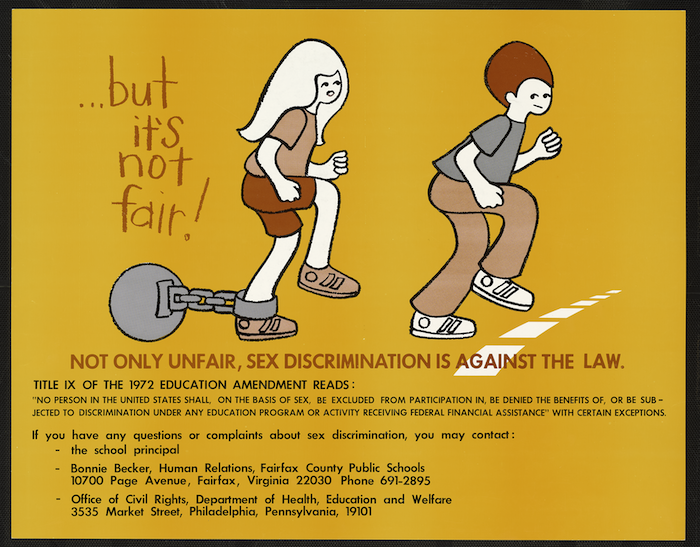 What do you know about Title IX? The average person might say something about girls and sports or sexual harassment on college campuses. Depending on their politics, perhaps they might describe it as legislation that once served a purpose, but is no longer needed. Yet, as the New-York Historical Society’s new exhibition, Title IX: Activism On and Off the Field—on view at the New-York Historical Society's Center for Women's History through September 4, 2022— reveals, this couldn’t be further from the case. In the 50 years since its passage, Title IX has played a hand in ushering women into higher levels of education and professional careers, opening doors to new areas of employment from corporate offices to athletic arenas, and remaking school curricula and classroom materials to discard outdated gender stereotypes. These societal shifts relied on this 37-word piece of legislation and on the crucial role of activists who understood the impact that expanding educational access could have for women.

Enacted in June 1972, Title IX was the first federal education legislation to specifically address gender when it prohibited sex discrimination in education. Activists lobbied for the original legislation, pushed for clear regulations and enforcement, and protested efforts that would have weakened the law's scope. Revisiting the law's history clarifies Title IX's aims and highlights the fact that although society has changed in many ways, more work remains to ensure that all students have access to an education free of sex discrimination.

The impact of activism can be obscured in hindsight, giving a sense of inevitability to cultural changes. Our exhibition digs into the history of activism and social transformation brought about by Title IX. As lead curator, I worked with a larger curatorial team—Mellon Foundation postdoctoral fellows Allison Robinson and Anna Danziger Halperin and Mellon Foundation predoctoral fellows Keren Ben-Horin and Karintha Lowe. Together, we created an exhibition that places activist work within the enduring throughlines of Title IX. The commitment to ensuring access to education free of sex discrimination, long-standing disputes around sports and sexual harassment, and changing definitions of sex discrimination have always been part of the history of Title IX. Contrary to popular understanding, this legislation has never been static: Both the definition of sex discrimination under Title IX and the law's protections have changed as society has changed.

Title IX was passed during a period of feminist legislative activity, when women's rights activists within and outside the federal government sought to institutionalize the groundswell that had spread across the country since the late 1960s. Educational access was a huge priority for feminist activists who saw the professional opportunities that access to higher education could provide to women. Many of Title IX's earliest advocates, including key activist Bernice "Bunny" Sandler, had personal experiences of sex discrimination in education.

Modeled after the Civil Rights Act of 1964, the law itself made up a small portion of the Education Acts of 1972. Not until after its passage did battles arise over the legislation's scope and its application to athletics. A cohort of young women in Washington, D.C., with experience working for federal agencies defended the new legislation. Using their professional experience, connections, and dedication to opening doors for women, they partnered with sympathetic members of Congress to defeat amendments intended to weaken the new law. The newly formed National Coalition for Girls and Women in Education joined more established groups like the League of Women Voters and received funding from the Ford Foundation to lobby in the nation's Capitol while educating women nationwide on how to combat sex discrimination in their local schools and communities. 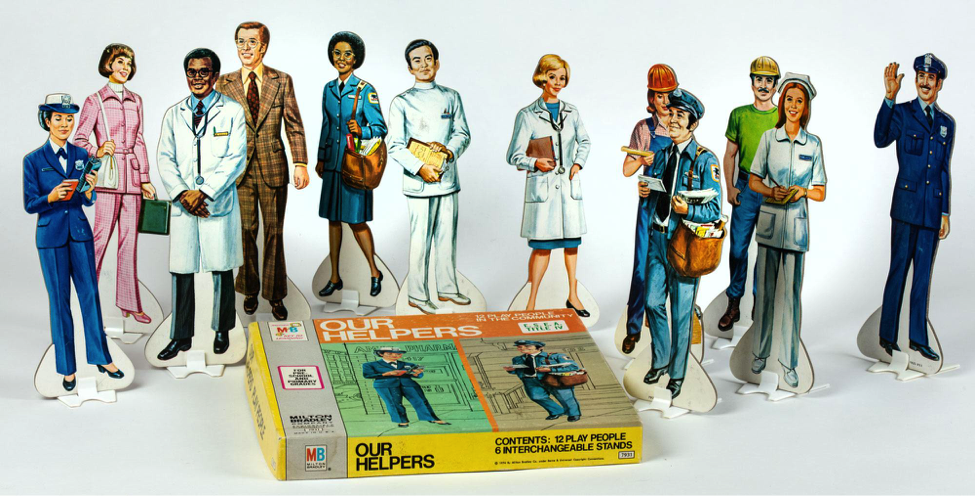 Title IX banned sex discrimination in education, yet left a larger question unanswered: What counts as sex discrimination? Federal regulations provided some initial answers, but when some government and educational institutions attempted to weaken or ignore Title IX, students used the legal system to clarify and enforce it. The exhibition examines key questions and court cases, and recounts the experiences of plaintiffs, many of whom initially knew little about Title IX and educated themselves when faced with instances of sex discrimination.

Sports remain a perennial battleground in the Title IX story in part because they make inequality visible in a relatable way. Women student–athletes enthusiastically joined intercollegiate teams and engaged in physical competition—some for the first time. But they found that the men's teams enjoyed better practice times, newer equipment, and more financial support. Despite claims about the value of athletic competition and expressions of support for female athletes, female athletics often receive less institutional support and girls who compete face scrutiny about their femininity and sexuality. 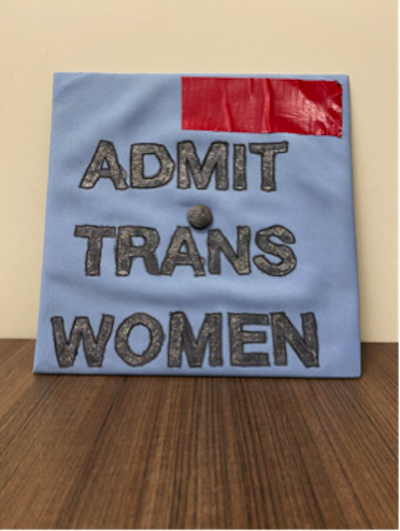 Society's growing understanding of gender as a spectrum versus a binary has also changed the definition of sex discrimination and revealed the sometimes tenuous nature of Title IX protections. In the 1970s, Title IX offered an opportunity to free boys and girls from sex stereotypes reinforced in classrooms by giving access to previously sex-segregated courses and pushing back against sexist classroom materials. Present-day efforts in the classroom involve welcoming the broad spectrum of gender identity. In 2016, an Obama administration “Dear Colleague” letter defined limiting transgender students’ access to a restroom, locker room, or sports team as sex discrimination under Title IX. The Trump administration rescinded this letter, reflecting its narrower definition of sex discrimination. Sports remain sex-segregated under Title IX, leaving trans and non-binary students wondering where they can play.

Curating an exhibition about a modern piece of legislation, particularly one seen as a political flashpoint, requires consideration of one's own perspective. What elements of the historical record does one include? What voices are prioritized? We drew extensively on New-York Historical's Women's Sports Foundation and Billie Jean King collections to illustrate the rise of women's professional athletics and the efforts put in place to support female student-athletes. Well-known repositories like the Schlesinger Library and the Library of Congress supplied contemporary images from the collections of some of the women related to this story. Yet some of our richest sources were the individuals we interviewed about their personal experiences with sex discrimination in education and their hand in shaping Title IX.

Finding objects for exhibitions often involves reading primary and secondary materials with an eye for the physical object. If a text mentions a certain poster or T-shirt related to an event or group, we ask: Does this still exist, and where is it? Some items show up on a quick eBay search. Other times, detective work is needed. When a plaintiff from Alexander v. Yale (1980), the first Title IX lawsuit to argue that sexual harassment was sex discrimination, told me about T-shirts made to fundraise for the suit, I tracked down the designer. She relayed the story of its origins but no longer had a physical shirt. She referred me to a Yale alumna who also no longer had a T-shirt.  But her friend did and was willing to lend it. These items heighten the emotional resonance of the exhibition by illustrating the personal stakes and impact of this legislation.

We conducted almost 60 interviews with scholars, activists, and people impacted by Title IX. We combined these narratives with the larger historical context of the legislation and the era. Our interviewees used Title IX not only to benefit themselves, but to aid those who came after them, from 1970s activists who saw themselves setting the building blocks for social change to activists in the 2010s who established organizations such as Know Your IX and End Rape on Campus.

Many interviewees viewed Title IX as an imperfect tool, at times insufficient to address the intersections of sex discrimination and race or sexual orientation. Others objected to newer policies for sexual assault hearings on college campuses that make them more like criminal trials. Yet no one believed that in 2022 Title IX is no longer needed.

Presidential administrations have differed in their commitment to the ideals of Title IX and its enforcement. Women's increased visibility in professional athletics has inspired generations of children, yet that visibility can also disguise the inequities that persist within sports. Institutions struggle to ensure the rights of all students on campus and to navigate the  political challenges of reallocating funds to address historic inequities.

Yet if we focus on the fundamental promise of Title IX— ensuring that sex discrimination does not impede a student's access to education—some of the noise falls away. Schools may face painful decisions, angry alumni, and political backlash. But it is hard to deny the value of an education, the damage done when a student cannot access their education, and the inspiring work of activists determined to be treated fairly. Fifty years out, we can look back and say with certainty that the U.S. landscape on gender equity would look very different today without Title IX. And the legislation continues to play an important role in shaping the future.