"Heroes of Our America": Reading a "Patriotic" History of the United States 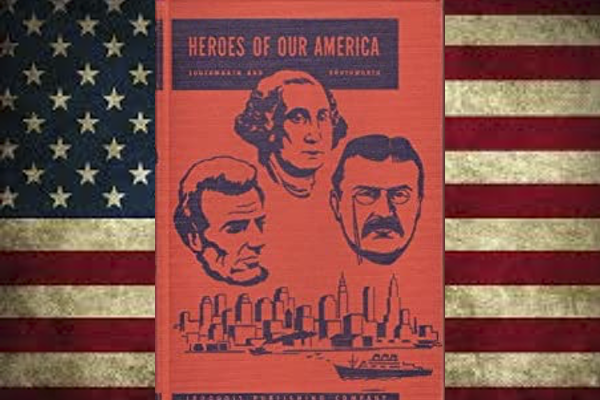 Heroes of Our America (1952) was a history book for fourth graders published by the Iroquois Publishing Company of Syracuse, New York. Its co-authors were Gertrude and John Van Duyn Southworth. John Southworth, with Harvard and Columbia University degrees, taught at a number of schools in the New York metropolitan area and was president of the publishing company. Gertrude Southworth, his frequent co-author, was also his mother.

I picked it off my office shelf after Donald Trump called for teaching “patriotic history” in American schools as a defense against a mythical radical “left” conspiracy and to ensure that  “our youth will be taught to love America.” Heroes of Our America is an example of the kind of “patriotic history” Donald and I were both exposed to as children in the 1950s. I grabbed the book when it was discarded from the Hofstra University Curriculum Materials Center only a couple of years ago.

Heroes of Our America’s thirty-two chapters include 31 biographies starting with Christopher Columbus and ending with baseball players Babe Ruth and Lou Gehrig. One chapter is a collective portrait of the English settlers of Plymouth Plantation; George Washington and Abraham Lincoln get two chapters each. There are biographies of two women, Jane Addams and Susan B. Anthony, and one African American, George Washington Carver. A page on “Important Historical Holidays” lists “January 19th: Robert E. Lee’s birthday, celebrated in the Southern states in honor of the great leader of the Confederate army, who was born in 1807.”

Historical fables taught in the past at least partly explain why the issues raised about slavery, ongoing racism, and United States history documented in the New York Times 1619 Project came as such a shock to White America and engendered such steep opposition from, among others, President Donald Trump. Accepting the Republican Party’s Presidential nomination, Trump recently told his audience, “we want our sons and daughters to know the truth: America is the greatest and most exceptional nation in the history of the world.” President Trump later threatened to defund California schools if they include the 1619 Project as part of the social studies curriculum and acted to purge any reference to Critical Race Theory or White Privilege in federal government agencies, including the Department of Education.

In the preface to their book, the Southworths announce that in spite of their differences all of the people included in the book had “one great thing in common; all of them helped make our country great.” Students are asked, as you “read about these people,” to try to find out “what it was that made each person great.”

Chapter Twenty-Three is a biography of Robert E. Lee, who did “gallant” military service as a United States army officer during the “Mexican War,” became “superintendent of the Military Academy at West Point,” and captured a “strange, fierce man named John Brown” who had “seized the government storehouse at Harper’s Ferry” and was “trying to get the slaves to rise up against their masters.” Students are told that in these actions, Robert E. Lee always “put his duty ahead of his own feelings.”  Eventually, as “In the life of many men there comes a time when they must choose between two things, both of which they dearly love. That time can for Robert E. Lee in the spring of 1861, when the Southern states left the Union.”  Lee’s “soul struggled with the choice between loyalty to the government under which he fought and loyalty to the state of Virginia and to the Confederacy.”  Lee chose Virginia, the Confederacy, and slavery and went to war against the United States, but the Southworths believe he remains a “great man” nonetheless.

George Washington Carver is portrayed as a Black Horatio Alger who succeeded through luck and hard work. In Chapter Thirty, students are introduced to “a boy who had less than any of the others. He did not even own himself, for he was born a Negro slave.”  As a baby, during what the book calls the “War Between the States,” Carver was “bought in exchange for a racehorse” by a kindly white family in Missouri who treated him “almost as though he had been their own child.” Carver left the family when he was ten years old to pursue an education. Heroes of Our America leaves out that Carter was denied admission to colleges in Kansas because he was Black. According to the book, through his discoveries in agriculture he later helped “his beloved South to become rich and prosperous,” which it didn’t, especially if you were an African American sharecropper. The chapter concludes, “Everybody in the United States, and particularly everybody in the South, owes a great deal to George Washington Carver.”

The Southworths' conclusion about Sam Houston in Chapter Eighteen summarizes their view about many of America’s national “heroes.” According to the Southworths, “Samuel Houston did many things during his lifetime. Many were good, and a few were bad. There were far more good things than bad, and the good things which he did were much more important.”

I went through the index focusing on some key terms: Africa, cotton, Declaration of Independence, Emancipation Proclamation, Indians, Negroes, Reconstruction, and slaves:

“Negroes who had been captured in Africa” landed in Jamestown in 1619. “They were made to till the soil and do all sorts of hard work . . . This was the beginning of Negro slavery in what is now the United States.”

“Many of the slaves were treated kindly and had comfortable homes, but others had little to eat and wear and had many hardships to endure.”

Curiously, students are told that “the Negroes of those days were not educated enough to work in the factories.”

Students also learn that songwriter Stephen Foster “really loved the Negroes, and used his songs to express the way he felt about them.”  The chapter on Foster includes the lyrics to “Old Black Joe”: “Gone are the days, when my heart was young and gay. Gone are my friends from cotton fields far away.” Students don’t learn that Foster’s songs were performed by whites wearing black facial make-up in minstrel shows where enslaved Africans were portrayed as simple people happy in their enslavement.

Coverage of the 1858 Lincoln-Douglas debates credits Lincoln with “the wonderful way in which he had expressed the arguments against slavery,” which of course, he didn’t. In the chapter on Henry Clay, students learn “It is in no way surprising that the people of the South saw much good and little evil in the slave-labor, which was so cheap and which served their purposes so well.” People, of course, meant white people only. Daniel Webster was a “true patriot” for supporting the Compromise of 1850 with the Fugitive Slave Law.

In the biography of Abraham Lincoln, students learn that Lincoln hoped that in response to the Emancipation Proclamation enslaved Africans would “desert the Southern cause and stop their aid to Southern troops,”  and that the Emancipation Proclamation gave “freedom to more than three million slaves living in the Confederate states,” which it didn’t. The Fifteenth Amendment is mentioned in passing in the biography of Susan B. Anthony, who “felt that if the freed slaves were permitted to vote, the women should be permitted, too.” Students learn about Africa in the biography of Theodore Roosevelt, who “went off to Africa on an exciting hunting trip. There he met black savages, and had dangerous meetings with the fierce animals of the African jungle.”

The Trail of Tears is missing in the book, but Indians are included as the “savage friends” of Daniel Boone and the Cherokee are mentioned as great friends of Sam Houston. Andrew Jackson “smashed” the power of the Creek Indians and defeated groups of “Indians and outlaws” raiding the United States from Florida, which at the time was controlled by Spain. In the chapter on Theodore Roosevelt, students learn “The Redmen were supposed to live on reservations, but they often left them, and they were not always friendly to the white men they chanced to meet.”

The Declaration of Independence is mentioned multiple times, but students never learn what it says. They do learn that cotton was not initially a profitable crop because "it took all day for a Negro slave to pick the seeds out of a single pound of cotton,”  that was until Eli Whitney developed “a machine with which a single slave could pick the seeds from fifty pounds of cotton in a single day.” John James Audubon fled a possible “uprising of the natives against the French” in Haiti in 1789. John C. Calhoun doesn’t merit his own chapter, but in a chapter on Daniel Webster, Calhoun is described as a “real statesman” and born debater and orator. Reconstruction is described in the biography of Woodrow Wilson. Growing up in the Southern states of Georgia and South Carolina, “he was very unhappy to see the way in which the North blamed the South entirely for the war, and made the Southerners suffer for it.” These experiences gave Wilson a “great sympathy for the ‘underdog,’ and always afterwards he was anxious to do what he could to help the weak and the helpless.”

Abolitionists, both black and white, Klan terrorism, Jim Crow laws, racism, and segregation, as well as workers’ struggles for union rights, do not appear in this fictional “patriotic history” book.