Martin Halpern is a professor emeritus of history, Henderson State University, and the author of UAW Politics in the Cold War Era and Unions, Radicals, and Democratic Presidents: Seeking Social Change in the Twentieth Century.  He was one of the organizers of the Coalition to Support BAM. He can be contacted at halpern@hsu.edu. 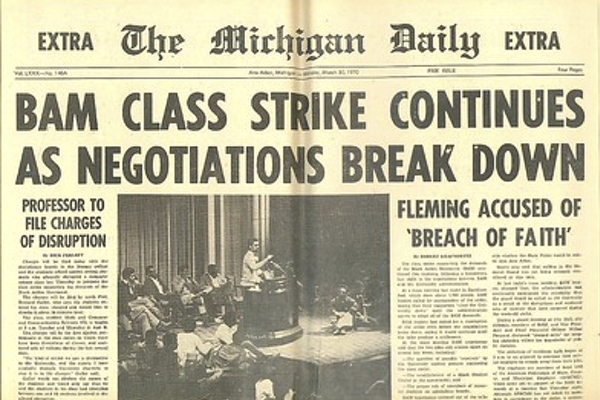 Activists in today’s struggles against institutionalized racism and for black lives can benefit from studying a local victory of fifty years ago. In the spring of 1970, the Black Action Movement (BAM) at the University of Michigan led a thirteen-day strike that won a commitment by the university administration to increasing black admissions to 10 percent of the student body, funding for ten recruiters for African American students and one for Chicano/a students, and increased funding for the Afro-American Studies Program and for other supportive services.

African-American students were 3 percent of the student body at the time of the strike. They prevailed because of unity among African-American organizations and between women and men and because of support from progressive and left-wing non-black groups united in the Coalition to Support BAM. Also crucial was support from radical and liberal faculty and from the university’s service and maintenance workers in Local 1583 of the American Federation of State, County, and Municipal Employees (AFSCME).

As in today’s struggles against police violence, progressive and radical whites recognized the importance of following African-American leadership. As is true today, the Coalition to Support BAM concentrated on educating the predominately white student body on the nature of institutionalized racism and the need for affirmative action.

BAM won endorsement of its demands from many faculty members, faculty organizations, and even from official university divisions such as the Residential College and the School of Social Work.  Some faculty held classes off campus and others cancelled classes. BAM and its supporters picketed university buildings, sometimes locking arms to prevent entry by those opposed to the strike, sometimes instructing pickets to keep their distance from one another and let people cross. Activists also marched through some buildings such as the business school, making noise to disrupt classes still being conducted. The turning point in the strike came when undergraduate students arose at 5 a.m. on Friday March 27, 1970, to picket their dormitories and other university buildings. Members of AFSCME Local 1583, which had endorsed the strike demands the previous night, refused to cross the picket lines. The dramatic reduction in university services due to AFSMCE’s support led the university administration to make significant concessions in the negotiations with BAM.

University of Michigan students had been learning about the connections between war, racism, and sexism since the previous fall. On October 15, 1969, students shut down the campus as part of the nationwide Moratorium Day to protest the Vietnam War. The local chapter of the New Mobilization Committee Against the Vietnam War (New Mobe) publicized the moratorium among students and the community by numerous means including calling every member of the student body on the telephone, going door to door in the Ann Arbor community, and sending caravans in the early morning for distributions at Detroit area auto factories.  Many of the workers were black and both black and white workers expressed strong support for the students’ efforts and gave the students money to show their support.

Students learned a lot from their interaction with workers and community residents and from New Mobe’s emphasis on the connections between the war, racism, and poverty. Among the speakers on October 15 in addition to peace activists were Jack O’Dell, editor of Freedomways magazine, State Senator Coleman Young, who three years later was elected the first African-American mayor of Detroit, and labor leaders Myra Wolfgang of the Hotel and Restaurant Workers Union and Doug Fraser, vice president of the United Auto Workers. Over thirty thousand people gathered at the University of Michigan football stadium for the culminating rally that evening.

For the actions in Washington, D.C. to protest the Vietnam War on November 13-15, New Mobe organized buses and sent 10,000 people to the demonstration, probably the largest concentration of any city or university in the country.  New Mobe had successfully tapped into an immense well of anti-war sentiment among the students and faculty on the University of Michigan campus. At the same time, it educated students on the economic and social impact of the war, encouraged them to view trade unions positively, and worked on developing anti-racist consciousness.

Although New Mobe speakers and leaders were mostly male, that weakness was partly corrected by the large role assumed by the women’s liberation movement in strike preparations and in the strike itself.  In the fall of 1967 women students had begun a successful campaign to end discriminatory curfews and dress codes. In the fall of 1968, the first consciousness-raising group, the Thursday Night Group, was established by women involved in supporting draft resistance. The next year, the Group protested the Miss Ann Arbor contest. Some of the participants in the Thursday Night Group became key members of the Women’s Liberation Collectives that played a vital role in the Coalition to Support BAM.

Women activists made their influence felt through their positions in the leadership of the strike, the activities of the women’s liberation collectives, a women’s liberation class, a day care center, and through women’s demonstrations.  Nearly three hundred black and white women picketed early in the morning at parking structures on Tuesday March 23, 1970, and moved on, chanting, to other places on campus when the police came.  That afternoon, a similar number of women gathered on the university’s central square, the Diag, and then marched to a hall where President Robben Fleming was “being entertained for tea.”  They sang, “I’ve got that feeling sister that BAM’s gonna shut that mother down.”  They questioned Fleming on budget priorities.  The strike newspaper Rainbow commented:  “Fleming’s meek defense in this confrontation was sharply contrasted by the strength of the women.”

There was opposition to BAM and to the strike from a variety of places. During a march against the war and in favor of the BAM demands that preceded the strike call on March 19, police picked off and arrested four African-American students from the mostly white group. During the picketing of campus buildings, African-American student picketers experienced far greater hostility from conservative opponents of the strike than did white students. Most well-known was the attack on the university administration by Vice President Spiro Agnew for capitulating to the student demands.

The BAM strike took place when the labor movement in Michigan was still quite strong. Five months after the BAM strike, the United Auto Workers launched a 67-day strike of 350,000 against General Motors that achieved a substantial wage increase, a 30-and-out retirement program, increased pension benefits, and a Christmas week holiday for all. Moreover, 1970 was a moment when the country was shifting left-ward with the first massive Earth Day demonstration on April 22, 1970, the shutdown of campuses over the invasion of Cambodia, the passage of such progressive legislation as the Occupational Safety and Health Act, the Clean Air Act, and amendments extending and strengthening the Voting Rights Act, and Democratic victories in the House of Representatives and governors’ races in the mid-term elections.

In the BAM strike, the essential workers who were members of AFSCME were crucial. Today, as we face a continuing pandemic, all rely on essential workers, many of whom, like in 1970, are people of color. The interconnection of issues today is as vital as in 1970. Undermining institutionalized racism through measures such as defunding the police, ending mass incarceration, and enacting legislation for reparations is on the agenda. The movement also is about promoting women’s leadership and ending violence and discrimination against women and against members of the LGBTQ community. The mobilization is continuing also because of the need to protect voting rights, for environmental and climate justice, for jobs for all at a living wage, for science-based public health measures to address the pandemic, and for Medicare for All. Support for unionization of essential workers and the enactment into law of the Protecting the Right to Organize Act can happen with a Democratic Congress and President.

The BAM strike showed local victories are possible. Although the university was less than consistent in its effort to reach the ten per cent black student enrollment goal, later cohorts of African-American students and their allies again and again renewed protests to secure attention to the initial goals and program commitments.  Eventually, the University Administration itself became a committed exponent of its affirmative action program, becoming a prime defender of university affirmative action before the Supreme Court in 2003.  Nevertheless, the ten percent goal was never reached. Moreover, a ballot initiative led to the banning of affirmative action programs in Michigan in 2006. In recent years African-American enrollment has hovered between four and five percent.

Achieving permanent change in the country as a whole will require uprooting the structures of institutional racism and establishing new egalitarian structures. It means remaining united and organized, continuing a program of education and self-education, and countering the forces that are still wedded to racist values. The crises we are living through are difficult but there is a way to a better tomorrow. As the leaders of BAM said on the conclusion of the 1970 strike on April 2: “We have shown that, from a well-planned and co-ordinated strategy, coupled with firm internal discipline and undergirded by a strong moral purpose, profound changes can be wrought in the established order; without violence.”