Trump’s Not Hitler, But Their Voters Display Some Similarities 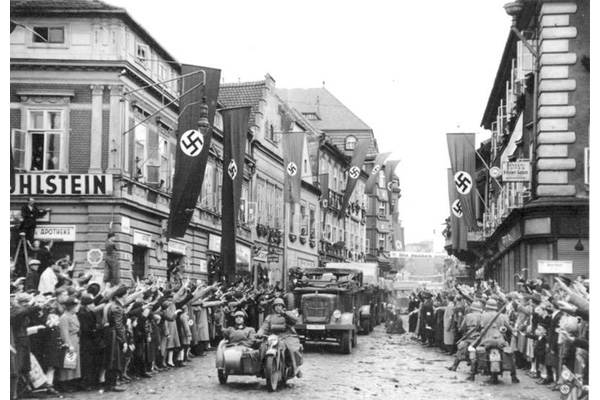 In recent months, Donald Trump has sometimes been labeled a fascist, but a group of sixteen historians knowledgeable about fascism considered that question, and most of them have concluded that he is not. This essay is not concerned with labeling our president-elect one way or another, but with pointing out some similarities that led a plurality of voters in Germany in 1932 to prefer Hitler’s Nazi Party over others, and U. S. citizens in 2016 to choose Trump, via the Electoral College though not in the popular vote. Furthermore, it will be argued here that such voters in both cases acted unwisely.

First, we should remind ourselves that Hitler came to power in Germany, just as Trump did in America, by democratic, constitutional means. This occurred when President Paul von Hindenburg appointed him chancellor of Germany in January, 1933. It was true that two years earlier Hindenburg had said that the highest office Hitler could ever hope to obtain was head of the postal department, but in the summer of 1932 German voters made Hitler’s Nazi Party by far the largest in the multi-partied German Reichstag, thereby making him a frontrunner for the chancellor’s position.

To say that Hitler did not have the backing of at least half of the people when he came into office in 1933 is no more relevant than saying that Donald Trump did not when he was elected in 2016. Neither man seized power. Both reflected the choices of voters in democratic, constitutional systems.

Although there are some similarities in the groupings supporting each man—each, for example, being most popular among voters in rural and small urban areas and among Protestants—the analysis here will focus on more general considerations.

Let’s first consider the German voters of 1932 who favored the Nazi Party over all others. Knowing all we now do about Hitler’s succeeding actions, we ask ourselves, “How could the Germans have preferred such a leader?” Among the many reasons, some bear resemblance to why many Trump voters preferred him: economic conditions, including loss of jobs; the belief that he could make Germany great again; fear and anxiety over the growing importance of what German nationalists considered “foreign” elements; the belief that government policies of previous years had failed them; the failure of other leaders to satisfy the German people’s aspirations; Hitler’s appeal as an “outsider,” as a change agent, as someone not part of the old political elite.

More specifically, we should note the following points. 1) In the summer of 1932, in the midst of the Great Depression, the German unemployment rate was about 30 percent. 2) Although Hitler did not, like Donald Trump, wear a cap that featured a slogan about making his country great again, much of his appeal was that he would do so. And German voters in 1932 had much more reason than U. S. voters in 2016 to believe that their country had fallen from greatness—their WWI defeat; the imposition of a peace treaty (the Treaty of Versailles) that imposed a loss of territory, economic reparations, and disarmament upon them; a terrible inflation in 1923 that wiped out many savings; and the effects of the Great Depression. 3) The growing German fear of “foreign” elements was different than the later fear of many Trump supporters concerned about foreign terrorists and illegal immigrants. To the Germans, the growing strength of German communists, whom many linked to Moscow, and some to Jews, was a major threat. As compared to Trump’s white nationalist supporters and those resenting the decline of white male dominance, Hitler’s trumpeting of the superiority of the pure white German Aryans appealed to many resenting the wealth and influence of some German Jews, plus the evil foreign WWI victors who had imposed the Versailles Treaty upon them. 4) German voters in 1932, still in the Depression and still owing reparations (though now suspended), had more reason to believe their government had failed them than U.S. voters did in 2016. 5) Just as many voters were dissatisfied with Nazi rival political parties in Germany in 1932, so too were many U. S. voters critical of Hillary Clinton and the Democratic Party. 6) Much of Trump’s appeal, just as with Hitler’s, was that he was perceived as someone different than the traditional politicians, as someone who would take bold actions and speak up for ordinary people.

To argue that voters who elevated Hitler and Trump to power acted unwisely is not to deny that they had grounds for dissatisfaction. How can one not be sympathetic with Germans in 1932, for example, when they suffered from 30 percent unemployment? Or with U.S. citizens who have seen many jobs lost to foreign workers or experienced increasing income inequality? But sympathy or empathy does not mean ignoring unwise behavior.

Of course, it is much easier to see why elevating Hitler was a mistake. We know all the evil effects. But Trumpian consequences are still in the future and may be better than many people fear. Yet electing Trump was still a foolish error.

Here are the some of the reasons why. Like Hitler, Trump is a narcissist who has consistently displayed unwise behavior. And neither his past actions nor his campaign promises indicate that he would further the common good. How could they, for example, when he has pledged to “cancel the Paris Climate Agreement [of December 2015], and stop all payments of U.S. tax dollars to U.N. global warming programs.” Despite recently claiming he would be open-minded about climate change, during his campaign he declared global warming and climate change a “hoax.”

Some Trump supporters voted for him because they thought he would save U. S. jobs. Considering that the unemployment rate had dropped considerably under the two-term Democratic President Obama, as compared to his two-term predecessor, the Republican George W. Bush, voters may be naïve to think it could drop much more. But even if it does, electing Trump could still be unwise. After all, Hitler reduced German unemployment from 6 million when he came into office to well under 1 million by 1939.

As wisdom researcher Robert Sternberg, states, “Wisdom is . . . the application of successful intelligence and creativity as mediated by values toward the achievement of a common good. . . . [It] is not just about maximizing one’s own or someone else’s self-interest, but about balancing various self-interests (intrapersonal) with the interests of others (interpersonal) and of other aspects of the context in which one lives (extrapersonal), such as one’s city or country or environment or even God.” In other words, political wisdom is not exercised by just voting for what might help one individual or group in a narrow sense—for example, by keeping their jobs or lowering their taxes—if it does not also benefit the common good.

In this age of identity politics, intense lobbying, and increased influence from moneyed interests, it is easy to forget, as numerous commentators from Aristotle to Pope Francis have reminded us, that it is the common good which should be the main goal of politics. In a succeeding essay, we’ll examine how Hitler failed to achieve this goal and the likelihood that Trumpism, with all its potential pitfalls, will also fail to accomplish it.