We Asked 16 Historians If They Think Trump Is a Fascist. This Is What They Said.

John Broich is an associate professor in the history department at Case Western Reserve University where he teaches WWII history from the British Empire perspective. 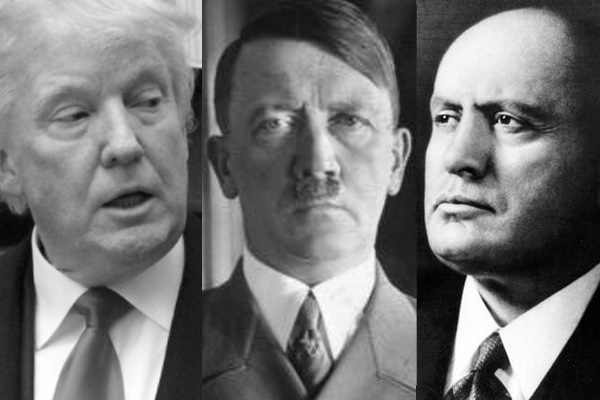 Related Link The Führer and the Donald: The Ghost of a Resemblance By Nicholas O’Shaughnessy

Michiko Kakutani did not actually name Donald Trump in her New York Times review of Volker Ullrich’s Hitler: Ascent, 1889-1939, but the review was hard to read as anything but a comparison. “Regardless of whether this review was intended as an article length Trump subtweet, that’s the reception it’s getting,” wrote a Washington Post observer.

In a way, those who saw Trump in Kakutani’s review were doing history since comparison is one of the tools by which historians try to understand the past. But does comparing Trump to Hitler or Trumpism to fascism elucidate either of them? Or does it warrant the charge of Godwin’s Law?

I raised the issue with sixteen historians of fascist-era Germany, Italy, Japan, and Spain, asking whether they would define Trump as a fascist and leaving them to decide how broadly they defined the term.

The vast majority did not consider Trump a fascist, with the most common specific objection that Trump does not lead a coherent movement with a specific ethos. “He has no normal political organization as distinct from a publicity team,” responded Stanley Payne, a noted authority on fascism history. “The major fascist movements certainly did, almost by definition.”

The second most common objection was that Trump is not undergirded by a paramilitary or that he does not advocate more political violence, granting his comments about “Second Amendment people.”

A few scholars said the definition of fascism is so limited that it cannot be applied outside the context of the 1920s-1940s. “As I see it,” David D. Roberts wrote, “fascism was a trajectory or process that exhausted itself.”

Most of the historians I asked named many similarities between Trump and Hitler, as Kakutani seemed to do, but almost all qualified them as particulars or matters of rhetorical style rather than sufficient proof of fascism.

About half thought a comparison with Mussolini was more apt. They cited Trump’s “I and I alone” demagoguery, his “exaggerated masculinity,” his attempt to synthesize notions of the left and right, his stress on leading a movement instead of a party, and his claim to be uniquely outside the system.

Instead of finding the similarities between Trump and Hitler convincing, many of the respondents found it far more compelling to compare the historical moments in which fascism and Trump arose. Academic historians’ focus on context should not be surprising since they are masters at analyzing the contexts for past events, trends, and people. It’s how they explain how things came to be.

Harvard historian of modern Japan, Andrew Gordon, told me that he thinks there are “overlaps” in “the contexts that in the past are understood to have generated fascism or support for it and in the context of the US today.”

“Trump has tapped into some impulses or segments of American society that resemble fascist impulses and constituencies,” wrote Michael Ebner, an expert on Mussolini’s Italy at Syracuse, like, “Xenophobia, focus on internal enemies of the nation, … protectionism.”

Professor Marla Stone, author of The Fascist Revolution in Italy, responded that she is struck by comparisons to the German and Italian contexts in which so many were “willing to support a candidate who clearly states his intention to rule outside the confines of democracy. The loss of faith in democratic institutions and the democratic process is a striking similarity.”

Sasha Pack, who teaches comparative fascism at SUNY Buffalo does not think Trumpism is fascism, and sees many differences in the two historical conditions that gave rise to each, but said that, “the parallels are worth pointing out anyway, not because they have predictive value, but because they provide an analytical exercise to help us better understand the Trump movement.”

Perhaps that’s the value of Kakutani’s review and the fact that so many readers seemed to draw their own comparisons—it amounted to an analytical exercise.

Yet it could be that historians’ concern about the similarities between fascist and Trumpist historical moments is scarier than Kakutani’s implicit comparison. Candidates come and go, while contexts tend to be long-lasting. Trump seems on course to lose the election, but the conditions that allowed his rise should persist. Professor Roberts, who just published a new book, Fascist Interactions, does not think that Trumpism is fascism, but “that doesn’t rule out the possibility,” he wrote, that from the Trumpist atmosphere, “something as bad as or even worse than fascism could emerge.”

No, historians don’t engage in prediction, but their work and what they see in this election certainly inclines them to expect something bad could always emerge.