In the 1930s Many Ignored Hitler. Now, It’s Global Warming. 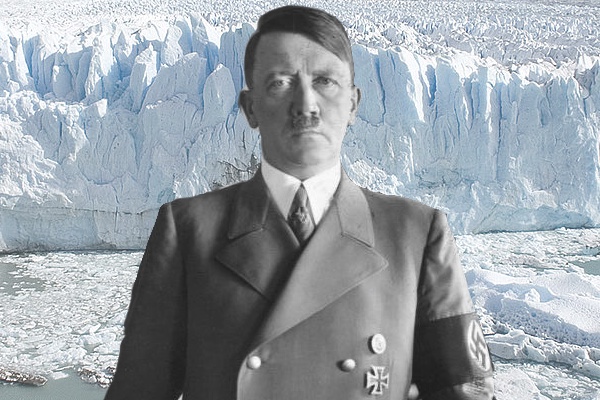 Since the election of Donald Trump, we have been inundated with an abundance of analysis. This present essay makes only one point about this already infamous election: the dangers of global warming and climate change were largely ignored or denied by most voters. Various exit polls make this clear.

How can this be? The global-warming issue is decades old, of momentous importance, and is getting worse. Already in the 1980s, Congressman Al Gore organized congressional hearings on the subject. Since 1995 numerous reports by the UN’s Intergovernmental Panel on Climate Change (IPCC), relying on more than 2,000 scientists worldwide, have cited increasing evidence of human-caused global warming. By 2009, the Academies of Science of the world’s major countries, plus 84 percent of U.S. scientists, agreed that our earth was getting warmer because of human activity.

In 2015, NASA indicated that “the 10 warmest years in the 134-year record all have occurred since 2000, with the exception of 1998. The year 2015 ranks as the warmest on record," and 2016 gives every indication of being even hotter. Furthermore, natural disasters like droughts, wildfires, melting ice caps, and flooding, all made more likely by global warming, are increasing in intensity and already causing great misery. And there was evidence, as a March 2016 Gallup Poll indicated, that more Americans (64 percent) “worried a ‘great deal’ or ‘fair amount’ about global warming,” up from 55 percent a year earlier.

In 2015 Pope Francis issued an encyclical in which he wrote of the necessity of making “radical decisions to reverse the trend of global warming” in the interest of the “common good.” A September 2016 New York Times piece indicated that President Obama often stated that climate change “is the greatest long-term threat facing the world, and that “he believes that his efforts to slow the warming of the planet will be the most consequential legacy of his presidency.”

But the election of Donald Trump puts this legacy in great jeopardy. Although Trump has recently said that he is open-minded about climate change, during his campaign he declared global warming and climate change a “hoax,” promised to “cancel the Paris Climate Agreement [of December 2015], and stop all payments of U.S. tax dollars to U.N. global warming programs.”  There is some evidence, as one August 2016 article indicated, that Trump increased global-warming denial among Republicans. And there is no doubt that those who voted for Trump and insured Republican control over all branches of government were much more likely than Clinton voters to agree, as many Republicans do, that global warming is a hoax or a minor matter.

How do we explain such a massive assault on common sense and such a pigheaded denial of reality? Certainly, people often vote contrary to rationality and political wisdom. Books like Jonathan Haidt’s The Righteous Mind: Why Good People Are Divided by Politics and Religion, and Rick Shenkman’s Political Animals: How Our Stone Age Brain Gets in the Way of Smart Politicshave made this abundantly clear.

Since “education is the strongest predictor of a belief that climate change is real,” and Trump did much better among voters without a college degree, it is tempting to think that many of the pro-Trump voters were just uneducated about the realities of climate change. Yet the correlation between educational levels and climate-change belief is less in the United States than in most other countries.

If not educational level, how about age as a main consideration? When one considers that Trump received most of his support from those 45 and older, is it possible that many of them shared the sentiment attributed to King Louis XV of France or his lover before the French Revolution, “Après moi le deluge” (After me the deluge). And the words seem strangely appropriate considering the massive flooding of coastal areas that could well result as global warming worsens. But most old deniers are not that callous toward succeeding generations who will suffer most because many older voters dismiss such dire warnings as just overblown rhetoric.

Other words as expressed in the title The Gathering Storm, which Winston Churchill gave to the first volume of his multi-volumed The Second World War, seem most fitting to express the increasing climate change dangers that we face. And it is in that volume that the British statesman chronicled his warnings against Hitler and how often they were ignored. Perhaps we can learn something from it that will help us better understand why people ignore oncoming great dangers, whether they are perpetrated by Hitler or global warming.

Even before Hitler became the German chancellor in January 1933, Churchill was warning the British politicians and public that Germany must not be allowed to match French armament levels. He was aware that many people in his country believed that the peace treaty imposed upon Germany after World War I was too one-sided and had contributed to German just grievances. He himself was open to negotiating some revisions, but to allow German “anything like equality of armaments . . . would be almost to appoint the day for another European war.”

From 1933 to 1939 Hitler pursued increasingly aggressive actions, often violating the terms of the Treaty of Versailles imposed upon Germany in 1919. In early 1935, he announced that he intended to reintroduce military conscription and increase the size of the German armed forces. In March 1936, he sent troops into the Rhineland, the demilitarized German territory bordering with France—he later stated: “If the French had then marched into the Rhineland, we would have had to withdraw with our tails between our legs.” From 1936 to 1939, Germany gave military support to General Franco’s forces in the Spanish Civil War. In March 1938, Hitler succeeded in bringing a Nazi to power in Austria and obtaining an invitation for Germany to occupy the nation, which it did. In September of that year British Prime Minister Neville Chamberlain in the infamous Munich Agreement accepted, along with French and Italian leaders, terms that soon allowed Germany to take over the Czechoslovakian “Sudetenland.” (In The Gathering Storm, Churchill later quoted a German general’s response to the question of whether the German army would have attacked Czechoslovakia if the Western powers had not appeased: “Certainly not.”)

Only at the end of March 1939, after Germany had taken over more of Czechoslovakia, and Lithuania had ceded to Germany the city of Memel, and Hitler had increased his demands upon Poland, did Chamberlain announce that he and the French leaders had agreed to back Poland fully if it was threatened. But up until Britain declared war on Germany on 2 September, a day after Germany invaded Poland, could anyone be sure that Chamberlain would not once again find a way to appease Hitler by giving in to his demands?

As Hitler increased his aggressive policies, so too (in the House of Commons and British press) did Churchill step up his criticism of them and of the British government for appeasing him. He spoke against reducing Air Force spending and urged more military preparedness. He warned that as soon as Germany thought it was strong enough to challenge France, countries such as Poland, Czechoslovakia, Yugoslavia, Romania, Austria, and the Baltic States would be threatened, and some would be taken over by force. He also feared that attacks against Jews could spread to areas like Poland. He urged Britain to lead the effort in forming an “effective union” of countries threatened by Germany (the League of Nations had proved itself ineffective).

A major country that he wished to be part of this union was the USSR. For more than a decade and a half he had been known as a virulent anti-communist, but he now considered Nazism a more odious danger. The British government, however, did not share his enthusiasm for an anti-Nazi coalition that would include the Soviet Union. Neville Chamberlain, who became prime minister in mid-1937, believed that communism still remained a greater menace than Nazism.

After Austria was taken over in early 1938, Churchill warned that Czechoslovakia was the next country likely to be threatened. Although Chamberlain thought the Munich Agreement was “a triumph for British diplomacy,” Churchill declared it “a disaster of the first magnitude,” and not just for Czechoslovakia, but also for Great Britain and France.

The day after Britain declared war on Germany, Churchill was appointed First Lord of the Admiralty, thereby becoming part of Chamberlain's War Cabinet. And in May 1940, he replaced Chamberlain as prime minister. But why did it take Britain six to seven years to realize that Churchill’s assessment of Hitler and how to deal with him was better than that of Chamberlain and other appeasers?

The answer to this question gives us insights into why global-warming deniers and minimizers refuse to perceive our “gathering storm.” In the 1930s, as today, other matters were more important to voters. In the mid-1930s one politician stated that “there was probably a stronger pacifist feeling running through this country than at any time since the War [WWI].” Remembrance of the horrors and appalling death toll of that war, plus the reluctance to spend limited government funds on military needs as the Great Depression continued, help explain the pacifism of many British citizens. Others believed that communism still remained a greater menace than Nazism.

In 2016 most voters thought numerous other issues more important than climate-change dangers: e.g., jobs and economic wellbeing, terrorism, immigration, foreign affairs, and morality issues like abortion and same-sex marriage. Among Christians, excluding Hispanic Catholics, Trump supporters outnumbered Clinton ones by a 3-to-2 margin. Many white Catholics, who supported Trump by the same margin, apparently were not greatly influenced by Pope Francis’s 2015 climate encyclical. In this regard, they mirrored the attitude of Catholic Republicans in Congress.

But Trump supporters and Republicans generally, like most British citizens in the 1930s, failed to exercise political wisdom when they voted in early November. They failed to grasp how terribly important it is for the common good to battle against the “gathering storm” of global warming. As the political philosopher Isaiah Berlin once noted, political wisdom necessitates “a highly developed discrimination of what matters from the rest.” As another thinker stated about wisdom generally, it aims “toward the achievement of a common good. . . . [It] is not just about maximizing one’s own or someone else’s self-interest, but about balancing various self-interests (intrapersonal) with the interests of others (interpersonal) and of other aspects of the context in which one lives (extrapersonal), such as one’s city or country or environment or even God.” In his address to the U.S Congress in September 2015, Pope Francis agreed that the “pursuit of the common good . . . is the chief aim of all politics.”

Political wisdom also involves engaging and arousing the imagination and emotions. In the 1930s, Churchill attempted in his speeches and writings about the “gathering storm” to awaken such among the British people. In her 2016 campaign, however, Hillary Clinton failed to come close to matching Churchill’s intensity about our own “gathering storm” of climate-change consequences.

If British voters had heeded Churchill’s warnings earlier, they might well have prevented much of the carnage and terrible destructiveness of World War II, including the Holocaust. Someday, after global warming has wreaked a vicious vengeance on our continent and those of other peoples, Americans deniers and minimizers may also well rue their years of ignoring the dangers of our own “gathering storm,” global warming.