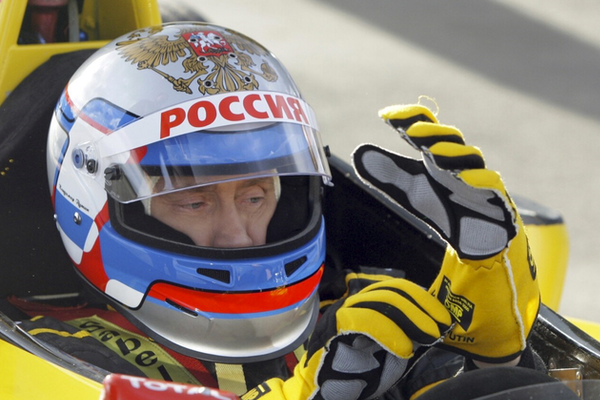 Seven years ago my “Putin vs. Obama: ‘Macho Man’ vs. ‘Girly Boy’?” appeared on this site. But much has occurred in the “macho” world since then. Trump and Trumpism, with all of their macho attributes, for one thing; Putin’s war of aggression against Ukraine for another. Plus, just a little over a month ago an enlightening book appeared that shines some light on our subject: Richard Reeves’s Of Boys and Men: Why the Modern Male Is Struggling, Why It Matters and What to Do About It.

The recent January 6 hearings and trials involving leaders of two key groups supporting Trump that day—the Proud Boys and the Oath Keepers—reminds us that the toxic macho Trumpist world continues to threaten our democracy.

In a January 20, 2021 essay on this site, I cited two articles, one entitled “Macho Politics Defined Trump's Presidency, Culminating With Capitol Riot” and the other, “The ‘Pussy’ Presidency.” They indicated that Trump’s machoness, “rejects values typically associated with the feminine—compassion, collaboration, deference to expertise—as evidence of weakness”; that men, as well as women, who approve of dominating men were “likely to support Trump”; and that many of the symbols of the Capitol building occupiers (most of them white males) were “grotesquely masculine”--“the pelts, the horns, the capes, the exposed chests, the tactical gear.”

In Adam Hochschild’s review of Andy Campbell’s recent book, We Are Proud Boys, he notes that the group “provided much of the organizational backbone for the Jan. 6 insurrection.” The reviewer also writes of the group’s anxieties and that they seem to reflect a fear that masculinity is being lost. He also notes that Proud Boys founder Gavin McInnes has said repeatedly that women’s place is in the home. And he quotes author Campbell’s words that misogyny is “baked into the rules” of the Proud Boys.

The Oath Keepers also reflect some elements of machismo. Stewart Rhodes, the group’s founder and a central figure in an October 2022 trial for seditious conspiracy (centered on the January 6 insurrection), served almost three years as an army paratrooper before breaking his back in a parachuting accident. Originally, when he founded his group in 2009, it concentrated on recruiting “military, first responders and police officers.” One source on the Oath Keepers emphasized the “macho, hierarchical and authoritarian mindset in the services that is perhaps more susceptible to far-right ideology.”

Such a mindset among some in the military was not new. In his 1977 book Rumor of War, Philip Caputo recalled how as a young college student in 1960 he enrolled in a Marine officer training program partly as a result of the romantic heroism of such war movies as Sands of Iwo Jima (1949), Guadalcanal Diary (1943), and Retreat, Hell! (1952) He explained his motivation as such: “The heroic experience I sought was war; war, the ultimate adventure; war, the ordinary man's most convenient means of escaping from the ordinary. . . . Already I saw myself charging up some distant beachhead like John Wayne in Sands of Iwo Jima, and then coming home a suntanned warrior with medals on my chest .  . .  I needed to prove something—my courage, my toughness, my manhood.” As with John Wayne movies in the 1940s and 1950s,  Rambo films later depicted a similar macho toughness.

As I indicated a decade ago in “Nationalism, Heroism, and ‘Manliness' in the Russian Films of Alexei Balabanov,” such machismo could also be found in the films of director Balabanov, who died in 2013. In movies that appeared both before and after Putin came to power, he depicted heroes who were tough, courageous, and willing to kill, but who lacked more pacific virtues like compassion, empathy, and tolerance. More recently, the Russian film Granit (2021), among others, displayed some of the same macho glorification of violence and war as did Balabanov’s movies.

A recent Ukrainian article, “How Russian Cinema Dehumanized Ukrainians and Laid the Ground for Today's War Crimes,” indicates that in declaring war on 24 February against Ukraine, Putin paraphrased a famous line from Balabanov’s Brother 2 (2000): “Where is strength, brother? Strength is in truth.”

And, of course, Putin seems very much in the mold of a Balabanov macho hero. As I noted seven years ago, the Russian leader liked to flaunt his “masculinity” in various poses, shirtless and muscles bulging, swimming, hunting, fishing, horseback riding. Or in various sports attire--for judo, hockey, skiing, diving. Or in a race car, speed boat, and fighter jet, or on a motorcycle. Or standing next to a bear and tiger (both tranquilized).

It would be simplistic to blame the Russian invasion of Ukraine on Putin’s misguided machismo, but it certainly is a factor. And as we witness Russian missile and drone attacks killing Ukrainian civilians, it’s obvious that he lacks some of the virtues like compassion and empathy that should counterbalance being tough, determined, and single-minded.

Macho presidents like Trump and Putin emerge out of cultures that support their efforts to become leaders of their countries. Films (and TV like Trump’s popular The Apprentice) are part of that culture. So too, especially in the U. S., is advertising.

A recent PBS NewsHour segment examined the advertising of guns. Duke psychologist Sarah Gaither, an expert on male aggression, told the PBS interviewer (Paul Solman) that a certain firearms ad sent “a very clear, unambiguous statement that if you are feeling insecure about your manhood, struggling with issues of fragile masculinity, the easiest way for you to reissue that masculinity is to buy their gun. Very simple.” She added, “When we think about what it means to be a man, it's very fixed, right? You have to be aggressive. You have to be tough. You have to protect your family. And the messages that gun ads in particular are showing are specifically targeting men who are struggling with this notion of what it means to be a man in our society.”

A former firearms executive confirmed Gaither’s analysis by saying that “advertising is all about encouraging this odd faux machismo, masculinity, own the room with guns. And it's really, really dangerous.” He also said that during the last decade and a half men aged between about 18 and 35 have “been a near exclusive focus for the firearms industry.”

The prevalence of macho gun advertising is not the only sign that machoness continues in 2022 to be a strong cultural force. In June of this year The Washington Post magazine ran a story entitled “How 2022 Became the Year of Over-the-Top Masculinity in Politics.” It declared, “In races nationwide, ‘he-man’ politics is on the rise.”

The January 6, 2021 insurrection, the 2022 Russian aggression against Ukraine, the senseless gun violence in the U.S., and this year’s “he-man” U.S. politics all make Reeves’s book Of Boys and Men timely indeed. He cites numerous statistics to make his point that men, especially the least educated and in the USA, are suffering and need a positive image of masculinity. Just a few quick facts he provides: “For every 100 bachelor’s degrees awarded to women, 74 are awarded to men”; “the wages of most men are lower today [14 percent lower considering inflation for those with only a high school diploma] than they were in 1979, while women’s wages have risen across the board”; “one in five fathers are not living with their children. Men account for almost three out of four ‘deaths of despair,’ either from a suicide or an overdose.” Furthermore, as columnist David Brooks points out in an article on Reeves’s book, men have more difficulty in making and keeping friends and in sustaining happy marriages--“wives are twice as likely to initiate divorces as husbands.”

Reeves thinks that the masculinity problem requires less emphasis on individual solutions and more on structural changes. For example, because of differences in maturation between boys and girls, he suggests that boys be a year older than girls when starting school.

Yet, whatever different answers might be suggested, there seems little doubt that cultures, whether in the U.S. or abroad, need to offer men more positive, more appealing images of masculinity than those of Trump, Putin, and Rambo. (Such positive male images could also help dissuade more women from finding macho men appealing.)

In a 2015 article by David Masciotra he contrasted two opposing views of masculinity as presented in the films American Sniper and Selma. In the first film, we see “the prevailing and prevalent projection of American manhood [which] is at once a cartoon, simplistic in its emphasis on strength and eschewal of sensitivity, and dangerous in its celebratory zeal for violence. It is not masculine as much as macho.” The second, about Martin Luther King, Jr. and other civil-rights protesters displays a truer and nobler type of masculinity. It is not one of war and killing, but protesting injustices, as was done at Selma, which requires a different type of heroism and courage, one more grounded in sound values and ethical judgments.

The quicker more films, TV programs, social media, the Internet, and even advertising, reflect the nobler type of Selma heroic masculinity, the sooner young men can aspire to emulate it. But pushback against such a transition is strong, especially among Trumpsters. A battle is not only being waged over U.S. democracy, but also over what it means to be a “real man.”