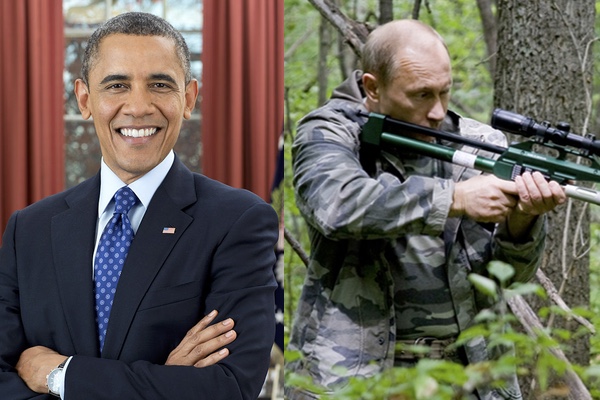 A few years ago a series of photos circulated contrasting “macho-man” Vladimir Putin and “girly-boy” Barack Obama. Last year the Huffington Post posted twenty-one Putin photos under the heading “Is Vladimir Putin the ultimate man?” In these various poses we see a shirtless Putin, muscles bulging, swimming, hunting, fishing, horse-back riding. He is also in judo, hockey, skiing, and diving outfits, and we are reminded that he has earned black belts in judo and karate and is an ardent amateur hockey player—in a recent match he is reputed to have “knocked in seven goals.” We also see him in a race car, speed boat, and fighter jet, and on a motorcycle, as well as next to a bear and tiger (both tranquilized).

In contrast, Republican attacks against Obama constantly charge that he is weak or feckless—code for unmanly?—regarding Putin, terrorists, Iran, and others. As much as they vilify Putin, conservatives constantly bemoan that Obama is not as “tough” as Putin. At times, their polemics suggest that the main difference between Republicans and Democrats is that the former is the party of macho men and the latter of “bleeding-heart liberals,” secular feminists, and “sissy” eggheads.

A former law professor, Obama has often been accused of being too professorial, of being what earlier might be called an “egghead.” As Richard Hofstadter indicated in his Anti-Intellectualism in American Life (1962), one writer (in 1952) defined an egghead as “a person of spurious intellectual pretensions, often a professor or the protégé of a professor. Fundamentally superficial. Over-emotional and feminine in reactions to any problem. Supercilious and surfeited with conceit and contempt for the experience of more sound and able men.” As Aaron Lecklider makes clear in Inventing the Egghead: The Battle over Brainpower in American Culture, conservatives often identified Adlai Stevenson, Democratic presidential candidate in 1952 and 1956 against Republican candidate retired General Dwight Eisenhower, as just such an unmanly egghead.

Today leaders of both major parties realize that most Americans want a leader who is “tough” and strong. And Hillary Clinton, the leading Democratic candidate to replace Obama, projects herself as just such a leader and has indeed been more hawkish than President Obama, for whom she served as secretary of state. (Must every woman in the English-speaking world be a hawkish iron-lady like Britain’s Margaret Thatcher if she wishes to lead her country?)

Moreover, is a macho leader really what we need? Or is such a desire too simplistic, a primitive throwback, perhaps appropriate in pre-modern times, but not today? The title of HNN editor Rick Shenkman’s forthcoming book, Political Animals: How Our Stone-Age Brain Gets in the Way of Smart Politics suggests that following our gut instincts can often lead us astray.

Like Al Gore in his book The Assault on Reason, Shenkman quotes recent findings of neuroscientists and recognizes that humans seldom act rationally. But he also believes that when it comes to politics, the times when we can unquestioningly go with our instincts are almost nil.” Instead, we have to rely more on “higher-order cognitive thinking,” which gives “us the ability to respond creatively to problems we encounter.” He also emphasizes the importance of culture “in shaping our behavior.”

In earlier essays, I have also stressed the importance of cultural influences and considered the effects of films in U.S. culture, many of which have romanticized war. In 1977 Philip Caputo recalled how as a young college student in 1960 he enrolled in a Marine officer training program partly as a result of the romantic heroism of such war movies as Sands of Iwo Jima (1949), Guadalcanal Diary (1943), and Retreat, Hell! (1952) He explained his motivation as such: “The heroic experience I sought was war; war, the ultimate adventure; war, the ordinary man's most convenient means of escaping from the ordinary. . . . Already I saw myself charging up some distant beachhead like John Wayne in Sands of Iwo Jima, and then coming home a suntanned warrior with medals on my chest . . . I needed to prove something—my courage, my toughness, my manhood.” (After being sent to Vietnam and witnessing atrocities there, he no longer saw combat in such a macho way.)

In a recent essay I quoted Caputo as well as an article by David Masciotra contrasting two opposing views of masculinity as presented in the films American Sniper and Selma. In the first film, according to Masciotra, we see “the prevailing and prevalent projection of American manhood [which] is at once a cartoon, simplistic in its emphasis on strength and eschewal of sensitivity, and dangerous in its celebratory zeal for violence. It is not masculine as much as macho”; in the second film, about Martin Luther King, Jr. and other civil-rights protestors, Masciotra thinks we see a truer and nobler type of masculinity.

In his book on war Gwynne Dyer has written, “The most important factor that makes it possible for men to fight in the terrible battles of civilized states is that all armies everywhere have always exploited the ancient and ingrained warrior ethic that is the cultural heritage of every young human male.”

More than a century ago philosopher William James realized how deeply ingrained this warrior ethic was. He wrote that “the military feelings are too deeply grounded to abdicate their place among our ideals until better substitutes are offered.” And several years earlier, “What we now need to discover in the social realm is the moral equivalent of war: something heroic that will speak to men as universally as war does, and yet will be as compatible with their spiritual selves as war has proved itself to be incompatible.”

Dying four years before World War I began in 1914, James did not live long enough to see just how horrendous the effects of macho militarism could be, but he realized that national leaders who advocated the militarism, nationalism, and imperialism that characterized his era were headed for tragic consequences. One of his former pupils at Harvard was Theodore Roosevelt (TR), who served as president for most of the first decade of the twentieth century and later urged his country to enter the war against Germany long before it finally did in 1917. James criticized TR for being a man who “gushes over war as the ideal condition of human society, for the manly strenuousness which it involves, and treats peace as a condition of blubberlike and swollen ignobility, fit only for huckstering weaklings, dwelling in gray twilight and heedless of the higher life.”

Of all our presidents, TR is the most similar to Putin in his emphasis on “manly” sports. Both before and after assuming our highest office, he boxed, wrestled, hunted, swam, hiked, and played tennis. In an 1899 lecture he emphasized the virtues of “the strenuous life.” In his The Games Presidents Play, John Sayle Wattersonranks our presidents in the categories of “Best All-Around Sportsmen” and “Best at Using Sports to Advance Their Presidencies,” and TR comes out on top in both categories. He was also one of more hawkish presidents.

In 1897 he wrote to a friend, “I should welcome almost any war, for I think this country needs one.” The next year he resigned his position as assistant secretary of the Navy in order to personally fight in Cuba during the Spanish-American War. He also supported U.S. imperialism, which manifested itself at the time by not only taking over the Philippines, Hawaii, Guam, and Puerto Rico, but also by turning Cuba and Panama into U.S. protectorates—the latter having been part of Colombia until TR supported a Panamanian revolution in order to arrange building a canal in the territory.

Roosevelt was especially contemptuous of pacifists and hated the “foolish theory that men should never make war.” He believed that the Navy was an “infinitely more potent factor for peace than all the peace societies.” Pressured into sending his secretary of state to participate in the second international peace conferences at The Hague, Netherlands in 1907, he admitted he paid little attention to it because he was “‘utterly disgusted’ with the nonsense chattered by professional peace advocates.”

But if such macho sentiments often lead to war, what sort of values should we look for in a twenty-first century leader? In Political Animals, Shenkman writes that “democracy demands that voters exercise wisdom when making political choices.” And I have written at greater length on our need for leaders to possess political wisdom. Such wisdom necessitates not only virtues that are often identified with toughness such as self-discipline, passion, and courage, but also others like prudence, compassion, empathy, humility, tolerance, creativity, temperance, the proper mix of realism and idealism, and a willingness to compromise, all in a quest to further the common good.

To progress toward achieving a more peaceful and sustainable world, toughness is not enough. When taken too far so that it leads to machismo and war hawkishness, and not balanced by other qualities, it can lead to war. From the times of Theodore Roosevelt to the rule of Vladimir Putin we have often witnessed this, both in real life and in media such as John Wayne films, Rambo,and American Sniper. Only, as Caputo discovered in Vietnam, war is more of an ugly and tragic reality than the glorious adventure often depicted in films.

All of the above does not ignore, as the philosopher James did not, the value of physical fitness, sports, or admirable qualities like bravery and self-sacrifice that soldiers often display. Nor does it deny the admirability of someone like Winston Churchill for insisting that appeasing Hitler was folly. Nor that in these terrorist times we need strong (but intelligent) responses.

But to criticize President Obama for not being more hawkish, to suggest that he is unmanly, is a mistake. What we should want in our leaders, whether male or female, U.S. or foreign, is wise people who know how to balance wise values. Some of them like compassion were once considered more feminine, while others like courage were thought more manly, but we realize today that such thinking was simplistic at best. If our choice is between a “macho man” like Putin or a leader like Obama who demonstrates more of a mix of what were once thought masculine and feminine virtues, the world would be better off with more Obamas.