Governors DeSantis and Abbott Borrow from the Jim Crow Playbook

Greta de Jong is Professor of History at the University of Nevada, Reno. 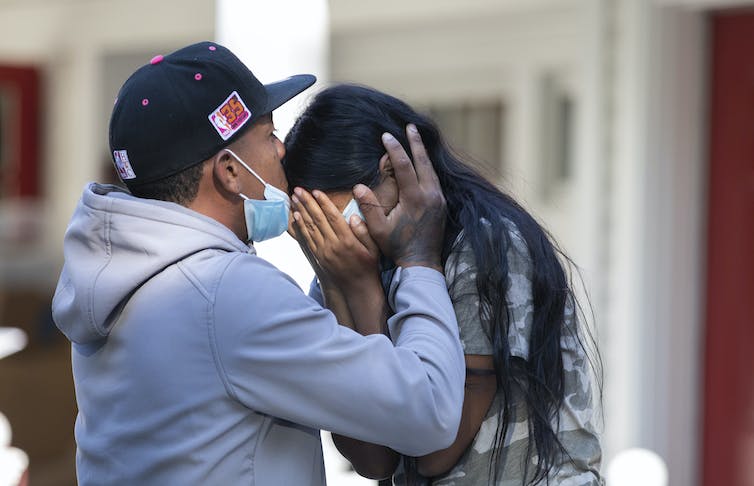 An undocumented immigrant from Venezuela kisses the forehead of another immigrant on the island of Martha’s Vineyard in Massachusetts. Dominic Chavez for The Washington Post via Getty Images

As a historian of racism and white supremacy in the United States, I’ve become accustomed to callous actions like those of Republican governors who organized transportation for Latin American migrants to states run by their political opponents.

Governors Greg Abbott in Texas and Ron DeSantis in Florida are following the playbook of segregationists who provided one-way bus tickets to Northern cities for Black Southerners in the 1960s. At that time, the fight for racial equality was attracting national attention and support from many white Americans, inspiring some to join interracial Freedom Rides organized by civil rights groups to challenge segregation on interstate bus lines.

Then, as now, the message Southern racists aimed to send with their “reverse freedom rides” was, “Here, you love them so much, you take care of them.”

But these acts were more than just political stunts designed to embarrass Northern political leaders who sympathized with the civil rights movement. They were part of a broader effort by white supremacists to remove Black Americans from their communities and avoid dealing with the social consequences of centuries of racial discrimination.

In the slavery and Jim Crow eras, racist policies backed by extreme violence limited access to education and economic opportunities for Black people to ensure that they had few options other than working for white employers.

Black sharecropping families in the early 20th century depended on their landlords to provide food, clothing and housing throughout the year until harvest time, when the costs of these goods were deducted from their share of the money made from sales of the crop. Plantation owners controlled the process, frequently using it to cheat workers out of their earnings and keep them perpetually in debt.

By the 1960s, however, most of these workers were no longer needed. Mechanization eliminated millions of agricultural jobs and generated massive unemployment in rural Southern communities. Rather than invest in job training programs or other initiatives to help displaced farm laborers, political leaders enacted policies designed to drive poor people out.

Strict eligibility requirements and arbitrary administration of state public assistance programs excluded many Black families from receiving aid. State legislators were slow to take advantage of federal funds that were available to expand anti-poverty programs, arguing that these were ploys to force integration on the South.

Government inaction left thousands of people without homes or income and exacerbated the suffering of the unemployed.

Civil rights workers who came to the South to help local Black activists with desegregation and voter registration efforts were shocked by the economic deprivation that existed in the communities they visited. They reported seeing widespread hunger, dilapidated housing, unsanitary conditions, high infant mortality rates and other adverse health effects.

Raymond Wheeler, a doctor who visited Mississippi in 1967, described the state as “a vast concentration camp, in which live a great group of poor uneducated, semi-starving people, from whom all but token public support has been withdrawn.”

Others took the analogy to Nazi Germany further, arguing that this was white supremacists’ “final solution to the race question.” By denying Black Americans access to the basic means of survival, they left them with no options but to migrate away.

The motivations behind these policies were both political and economic. White racists understood that providing assistance to displaced workers would encourage Black people to stay in the South. That posed a threat to their power, especially after passage of the Voting Rights Act in 1965 enabled more Black people to register to vote, participate in elections and run for office.

Moreover, the candidates Black Southerners supported ran on platforms that advocated policies to ensure racial and economic justice: investment in schools and other public services, enhanced assistance for unemployed people, more affordable health care and a stronger social safety net for those who were unable to work.

These proposals were anathema to wealthy white people who would face higher tax rates to pay for them. Warning of the consequences should Black Southerners be allowed to vote, Mississippi Citizens’ Council leader Ellett Lawrence asserted that property owners could see tax increases of “100%, 200% or more” if Black people were elected to office.

In a study of Wilcox County, Alabama, the National Education Association found that many landowners were afraid “the Negro majority will obtain control and raise land taxes to finance education and other services.” It concluded that this group showed “little taste for the anti-poverty programs of the sixties because it is more anxious to solve its problems through outmigration than it is to improve all of its people.” 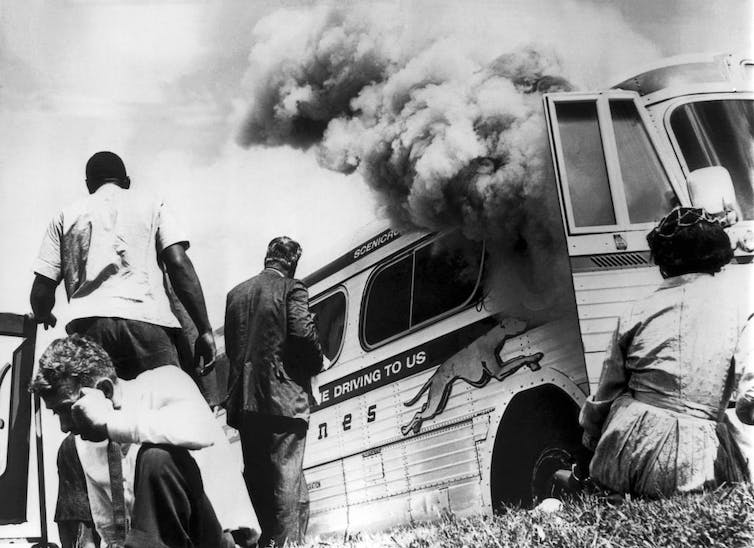 A group of Freedom Riders outside a bus that was set aflame by a group of white people in Alabama. Underwood Archives/Getty Images

White supremacy then and now

In many ways, Republicans like Abbott and DeSantis are the political descendants of Southern segregationists whose cruelty horrified other Americans in the 1960s.

Immigration scholars have noted how U.S. foreign policies contributed to the poverty and violence in Central and South America that migrants are fleeing. Yet rather than acknowledge this – along with assuming the moral responsibilities it entails – some GOP leaders denigrate and dehumanize refugees to win support from voters drawn to xenophobic messaging.

Watching this resurgent nativism, racism and disregard for human rights gaining strength in the 21st century is an ominous sight for anyone familiar with where these ideas have led in the past.