The NFL Must Learn Lessons About Inclusion from Women's Sports

John Howard is Emeritus Professor of Arts and Humanities, King’s College London. He is the author of Men Like That: A Southern Queer History and executive producer of The Joneses. 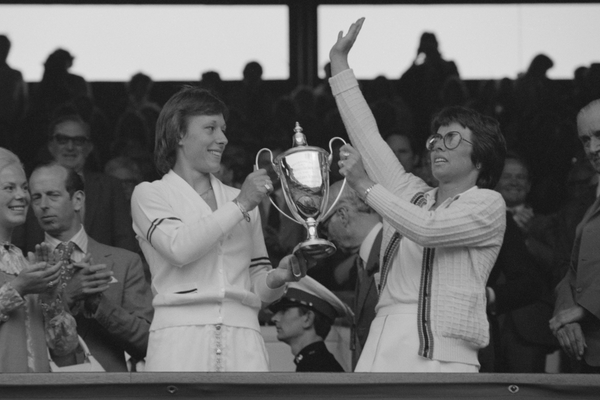 This article is the second of a two-part series prompted by the coming out announcement of NFL player Carl Nassib. Part 1 is here.

In an unprecedented Pride season twofer, NFL player Carl Nassib has both come out as gay and joined the campaign against LGBTQ youth suicide, which is five times the straight rate. The implication is clear. A dearth of accomplished out role models perpetuates this global mental health crisis, in a vicious cycle born of structural oppression, hate crimes, and deadly violence.

Instead of matching Nassib’s gift to the Trevor Project at an emblematic 5:1 ratio, instead of announcing a bold multi-league initiative against homophobia and transphobia in the multi-billion-dollar sports industry, NFL Commissioner Roger Goodell issued a tepid statement “wish[ing] Carl the best of luck this coming season.” He’ll need it. History reveals decades-long institutional barriers to LGBTQ participation that remain steadfastly in place today.

An entire genre of pro athlete coming out memoirs attests to official intransigence—and LGBTQ resistance—beginning with bestseller The David Kopay Story from 1977. These important books confirm that the Big Four’s first four out retirees from MLB and the NFL (never mind the NBA and NHL) found it impossible to land coaching jobs. In addition to employment discrimination, black veterans Glenn Burke and Roy Simmons suffered further biases, leaving them homeless, landing them in prison. Though in 2014 Billy Bean was named “the very first MLB Ambassador for Inclusion,” the number of out pro baseball players on the active roster since 1876 remains, well, zero.

Whatever the organizational limits to his effectiveness, doubtless considerable, Bean is right to praise “the bravery of individuals” such as Nassib, while emphasizing “more commitment” from commissioners. After all, mammoth systemic inequities require both on-field and front-office resolve. Big Four management can learn valuable lessons from the queer histories of women’s and individual sports, notably women’s tennis.

In her coded 1958 memoir I Always Wanted to Be Somebody, African American tennis star Althea Gibson claimed a tomboy identity as she took aim at “the poobahs”—the older white businessmen who controlled women’s sports. World number one in 1957 and 1958 with a career total 56 singles and doubles titles, Gibson retired from the game because she couldn’t afford to live on its meager amateur allowances, with neither prize money nor commercial endorsements permitted. After selling her book to Harper, she turned to women’s golf, which had professionalized earlier. She won titles and sponsorships, an automobile, tens of thousands of dollars, and a career high ranking of 27 in 1966. Though “journalists disparaged Gibson for living a broadly queer life suggestive of lesbianism,” as scholar Ashley Brown writes, Gibson continued to assert her gender-nonconforming independence.

Independence proved essential to reducing gendered pay gaps and to countering male commentators’ perpetual focus on attractiveness over athleticism. Trailblazer Billie Jean King founded the Women’s Tennis Association in 1973, run by and for women. Then in the 1980s, European American memoirists variously came out in print, as they further critiqued misogyny, as with King; xenophobia, as with Martina Navratilova; and transphobia, as with Renée Richards. King and Navratilova cautiously acknowledged same-sex relationships in their books, confirming rumors while attempting to safeguard endorsements. Though they both embraced the categories of woman and professional athlete, these “no labels” lesbians paradoxically asked readers to suspend language around sexual identity, with muted assertions of bisexuality. Such was the fraught path, King remembers, from feminist icon to LGBTQ icon.

Likewise daring, Richards’ 1983 memoir detailed her 1975 male-to-female sex reassignment surgery, now known as gender confirmation, as well as her legal battles with the U.S. Tennis Association, which had begun chromosome screening of female players. Though Richards prevailed before the New York Supreme Court, “invasive genital inspections and DNA-testing” persisted across various sports, as author Amelia Abraham shows. Because today scientists still can’t “agree on whether trans women on hormones have an advantage[,] the debate rages on, with trans athletes caught in the crossfire.” Five decades after Richards, former Olympian and conservative California gubernatorial candidate Caitlyn Jenner appears no less flummoxed than the lab specialists. Most significantly, the worrisome “disconnect” Abraham tracks between some high-profile visibility and the extreme dangers faced by the vast majority of LGBTQ people worldwide demands diligence, decisiveness, and innovation. Massive systems are broken, she insists, and they need fixing.

To that end, the NFL must make another U-turn and do the right thing for LGBTQ athletes from little leagues on up. First, it should forge a consortium on diversity, equity, and inclusion not only with the other Big Four leagues but also with inventive associations such as the WTA and NWSA, which has cultivated proud lesbian stars such as Megan Rapinoe and Kelley O’Hara. Second, this grouping must rely on the established expertise and guidance of LGBTQ organizations by partnering with GLAAD, GLSEN, and Lambda Legal, as well as the Trevor Project. Third, acknowledging its global influence, the consortium should also build bridges to the international Gay Games, ILGA, and OutRight.

Fourth, final, and above all, the Big Four must announce a precise action plan with timetable for implementation to remedy its shameful 150-year history of entrenched homophobia. At this late date, gradualism is not an option. While executives dicker, the death toll mounts. Along with legends Gibson, King, Navratilova, and Richards, they should bear in mind the shining example of a forthright team player from West Chester, Pennsylvania. For Carl Nassib’s “agonized” journey to self-acceptance and community has revealed to him—as it should reveal to all of us—“an immense responsibility to help.”

Editor's Note: This article was originally published with an error. The author of a scholarly work on Althea Gibson was identified as Ashley Jones. Her name is Ashley Brown. HNN regrets the error.