Carl Nassib's Coming Out Will Save Lives; How Many Depends on the NFL's Support

John Howard is Emeritus Professor of Arts and Humanities, King’s College London. He is the author of Men Like That: A Southern Queer History and executive producer of The Joneses. 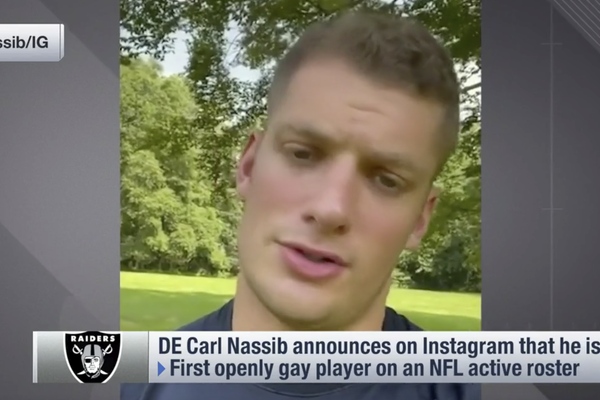 Carl Nassib’s coming out this Pride season is historic. He is the first active NFL player to do so. More importantly, Nassib’s casual but careful revelation implicitly links systemic homophobia in elite male team sports—and the resulting dearth of out-and-proud role models—with LGBTQ youth suicide, which is five times the straight rate. In his Instagram message, Nassib pledged $100,000 to the Trevor Project to provide desperately needed crisis intervention and suicide prevention services.

Differential depression and suicide levels have long been known. And suppressed. As pioneering queer theorist Eve Sedgwick memorably wrote about quashed Reagan-Bush-era studies: “Many people … claim they'd as soon their children were dead as gay. What it took me a long time to believe is that these people are saying no more than the truth.” Differential pandemic response to HIV/AIDS further proved it, constituting genocidal neglect. Today, while acknowledging that societal stigma, discrimination, and violence aggravate LGBT “mental health issues,” the World Health Organization has declared no state of emergency. It wages no campaign against the global queer youth suicide crisis.

Carl Nassib understands that the personal is political, that his starry profession impacts on vast collectives. Nowhere stated, everywhere apparent, his announcement is made possible by last year’s landmark 6-3 Supreme Court decision in Bostock v. Clayton County, at long last forbidding LGBT employment discrimination in the United States. Savvy but humble, Nassib recognizes that he “stand[s] on the shoulders of giants, incredible people who paved the way,” even as he concedes insufficient knowledge of LGBTQ history. No reflection on him, that impediment likewise is structural. Admirably Nassib steps forward and volunteers: “I am eager to learn and to help continue the fight for equality.”

Queer sports history is indeed a fight, between the “courageous LGBTQ community” members Nassib honors and mammoth institutional forces that would thwart them. For example, from 1876 to 2000, as tens of thousands of men from around the world competed professionally in elite North American team sports, the Big Four leagues of MLB, NBA, NFL, and NHL tallied a grand total of four athletes who publicly came out as gay, all after retirement. This miserable record evidences organized sports cultures of toxic masculinity that aggressively reject LGBTQ participation, from little leagues to NCAA to Big Leagues. It represents a shameful century and a half of rampant homophobia.

If race has affected outcomes, so too has religion. Even this miniscule sample of two black pros is revealing. Though targeted alike in the infamous failed war on drugs that disproportionately penalized people of color, Burke and Simmons took different routes to recovery from addiction, exposing the myth of a separation of church and state in U.S. criminal justice. On the one hand, Glenn Burke found post-retirement solidarity and empowerment in LGBT sports leagues, the quadrennial Gay Games, San Francisco’s Castro district, and its HIV/AIDS hospice care. On the other hand, Roy Simmons returned to his southern evangelical roots. He followed 12-step “spiritual programs” in the outsourced probation services of the privatizing prison industrial complex. Simmons’ ambivalent gay pride led him repeatedly in and out of the closet. He came out on Phil Donohue’s talk show in 1992, only to go back in again on the Christian Broadcasting Network in 2006, concluding that “homosexuality [is] really against god’s will.”

Let’s hope Carl Nassib’s Catholic schooling was better than most. Scarred by several suicide attempts, the last closeted Catholic lineman I met was deeply paranoid, signalling the under-researched relationship between religious magical thinking and psychiatric delusion. Simply put: formative years’ teaching about a guy in the sky watching your every step easily morphs into further delusions of cameras in every room trained on you. Against proselytizing faith schools, scholar Richard Dawkins proposes comparative religious studies: “Let children learn about different faiths, let them notice their incompatibility, and let them draw their own conclusions about the consequences of that incompatibility. As for whether they are ‘valid,’ let them make up their own minds when they are old enough to do so.” My added emphasis on age-appropriate instruction is a reminder. Teachers often are encouraged to religiously indoctrinate primary pupils but squelched or fired if they even acknowledge the existence of LGBT people to secondary students, from Thatcher’s Britain to Putin’s Russia to Orban’s Hungary.

With staggering hypocrisy, the NFL twists Nassib’s words, hoping that “soon statements like his will no longer be newsworthy.” This official statement is either hopelessly naïve or cynically disingenuous. Or both. Unless and until organizations such as the National Football League take decisive innovative action to remedy decades of bias, that bright day will never come. MLB hired veteran Billy Bean as a vice president for inclusion but gave him limited power to effect change. So while executives and teammates hail Nassib for being “comfortable enough to go public,” they mask their complicity in the root cause of discomfort: discrimination, danger, and—Sedgwick insisted—death.  As ethicist Gary Spitko reports, Esera Tuaolo’s teammates admitted that “had he come out as gay during his NFL career,” he would have been “intentionally injured [at] practice.”

Every summer, baseball player Carlos Correa and colleagues clap and point heavenward, even after a squib single (If god is lending a hand, where was she during the Astros sign-stealing scandal?). Every fall, with each successive concussive tackle, mancaves across the land echo with that perverted gleeful “OOOOOOOOOH!”—recalling ancient blood sports ostensibly outdated.Meanwhile Carl Nassib “just want[s] to take a quick moment to say that I’m gay.” What a moment it is. He is a gentle giant among mere mortals.

The shoulders on which Nassib stands are mostly female. Out women in pro sports such as Billie Jean King, who tweeted “love and support to Carl,” are the subject of the second piece in this two-part series.