Fran Shor is an Emeritus Professor of History at Wayne State University and a peace and justice activist. His latest books are Weaponized Whiteness (Haymarket 2020) and his debut novel, Passages of Rebellion (Outskirts Press 2020). 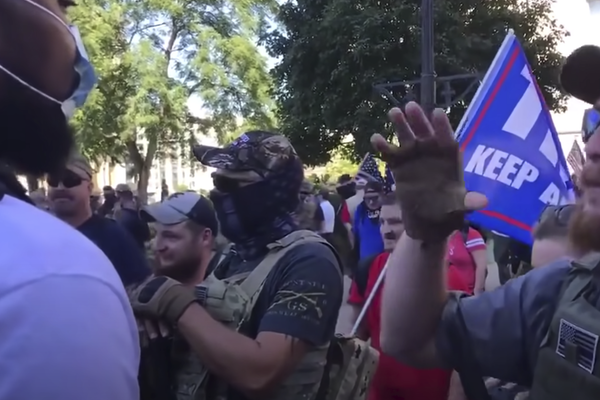 Categorizing the riotous mob that invaded the Capitol Building on January 6th remains a contested matter. Whether dismissive of clownish performers in a violent spectacle or alarmed by proto-fascist insurrectionists attempting a coup, a common descriptive thread, nevertheless, runs through the various interpretations of those incited by Donald Trump’s belligerent words. That interpretive thread leads directly to identifying the D.C. rioters as aggrieved and resentful whites.

Trump’s ideological Big Lie to “Stop the Steal,” emblazoned on banners that fluttered above the rallying crowd and then loudly chanted by those who broke into the Capitol, resonated beyond the thousands gathered in Washington. His message, amplified by right-wing media and social media, of “illegal” voting tapped into the dog-whistle politics that informed the racial resentments of his followers and much of the Republican Party since Richard Nixon’s “Southern Strategy.”

Even before Trump emerged as a candidate for the presidency, the Republican Party utilized racist strategies to impede the political empowerment of people of color. Manipulating the institutional levers of a deeply undemocratic electoral system, from partisan gerrymandering to voter suppression tactics, became an integral part of gaining and maintaining political power. In effect, the Republican Party had developed institutional mechanisms to weaponize whiteness.

As a consequence of both settler colonialism and racial capitalism, weaponized whiteness has a long history in the United States of controlling and terrorizing racialized others through both legal and extra-legal methods. The legal expressions of weaponized whiteness operated through structural arrangements built into a system of white supremacy. Perpetuating its rule through socio-economic, political, and cultural practices, these legal expressions represented the “invisible hand” of white supremacy. In the twentieth century, this “invisible hand” of white supremacy guided racial discrimination in housing, education, employment, and the allocation of public goods and services.

While the Democratic Party in the South deployed the institutional operation of weaponized whiteness through Jim Crow laws, at times they turned to an extra-legal “iron fist” of vigilante violence to maintain political power. From city-wide massacres in Wilmington, North Carolina to Rosewood, Florida to Tulsa, Oklahoma to wide-spread lynching, such state-sanctioned vigilante violence helped Democrats aggressively assert their white supremacist political privileges.

Contesting both the “invisible hand” and “iron fist” of weaponized whiteness through legal challenges and political protest, especially after World War II, African Americans and their allies slowly eroded the rule of white supremacy. As the white backlash to these civil rights victories grew, party allegiances, first in the South and then elsewhere, switched from Democrats to Republicans.

It’s not surprising, therefore, that a vigilante wing of the Republican Party emerged, in particular under Trump. Mobilizing to defend Trump in the aftermath of his electoral defeat in 2020, this vigilante network, composed of white supremacists and white nationalists, were an integral part of the insurrection on January 6th. The violence exhibited then and threatened for days before can only be described as fascistic, especially in its disdain for the mechanisms of formal democracy, its deep misogyny, and denial of reason in favor of the irrational.

Trump encouraged this vigilante violence throughout his presidency, refusing to condemn the neo-Nazi and white nationalist outrages at Charlottesville. Provoking his vigilante minions during some of the initial lockdowns for the coronavirus, Trump tweeted on April 17, 2020 that, among other states, his followers should “Liberate Michigan.” Less than two weeks later, there was an armed takeover of the Michigan Capitol Building. A small group of these proto-fascists even plotted to kidnap and execute Governor Gretchen Whitmer. Ever the bully and enabler of vigilante violence, Trump not only refused to apologize for these incitements, he doubled-down in the lead-up to and at the January 6 rally.

Yet, Trump has not been an outlier when it comes to the use of vigilante violence for the protection and perpetuation of white supremacy and white nationalism. With cries for “law and order” and the pointed use of drug and criminal justice policies, the Black community, in particular, faced renewed state-sanctioned violence and police brutality in the late twentieth century. As the “war on poverty” of the 1960s morphed into a “war on crime,” African Americans became the target of punitive policing as a consequence of racist presumptions about the “pathologies” of the Black community. With the insurgencies of those Black communities from Newark in 1964 to Detroit in 1967, innocent African Americans fell victim to the mayhem of malevolent police.

Policing in Detroit and Chicago took an ominous vigilante-like turn with the creation of “special” police units that waged a reign of terror against Black men. The STRESS (“Stop the Robberies, Enjoy Safe Streets”) squad in Detroit in the first years of its existence in the early 1970s murdered a young African American male each month. In Chicago the counterinsurgency techniques and torture practiced in Vietnam found their way into a police unit that subjected over one hundred Black criminal suspects over a twenty-year period to those brutal methods first deployed in Vietnam and later used by some of the very same police in the “enhanced” interrogations at Guantanamo.

Especially in the aftermath of the Black Power insurgencies of the 1960s, aggressive militarized policing and punitive policies towards African Americans resulted in the massive expansion of imprisonment. This physical and legal harassment of African Americans not only led to higher rates of incarceration, but also continued the legacy of system racism when it came to the criminal justice system. Whether through the operation of racial profiling in the criminal justice system or the extrajudicial killings of people of color by police or other non state-sanctioned white vigilantes, punitive measures disproportionately targeted communities of color.

Confronting how weaponized whiteness has terrorized African Americans was, of course, one of the main thrusts of the massive mobilizations under the banner of BlackLivesMatter from Ferguson through the George Floyd protests. Taking on the vigilante violence of Trumpists will not only be a matter for the traditionalists like McConnell, Romney, Cheney, etc in the Republican Party and their corporate sponsors (who, nonetheless, tolerated and enabled the invisible hand of weaponized whiteness), but also the millions who rallied under the #BLM banner.

As Timothy Tyson contends in his conclusion to his compelling history of the Emmett Till murder: “All of us must develop the moral vision and political will to crush white supremacy – both the political program and the concealed assumptions. We have to come to grips with our own history – not only genocide, slavery, exploitation, and systems of oppression, but also the legacies of those who resisted and fought back and still fight back.” Our commitment to fighting back against weaponized whiteness, whether in its covert “invisible hand” or overt “iron fist” dimensions, will ultimately determine whither weaponized whiteness and whether we can realize an authentic and inclusive multiracial democracy.