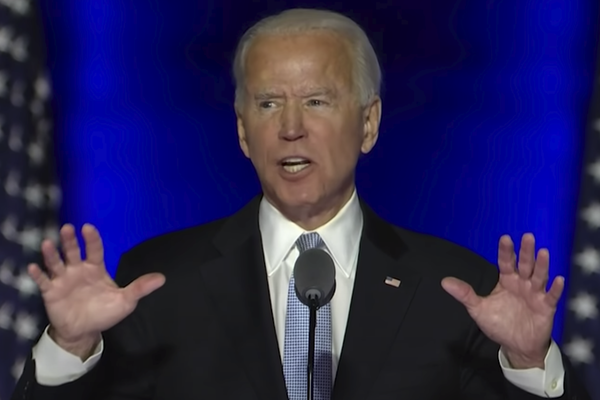 A few weeks ago HNN posted Joe Renouard’s “Post-Election America Will Still Be Deeply Divided.” Although he makes some good points, the odds seem good (at least to me) that president-elect Biden will be able to reduce our political divisiveness. This will be true whether or not the Republicans retain dominance in the Senate, which we will not know until January. After reviewing our history of conflict versus consensus, I’ll indicate six major reasons why I think Biden can reduce our present polarization.

The Civil War was our period of greatest conflict, but later periods of consensus also existed. In her Inventing the "American Way": The Politics of Consensus from the New Deal to the Civil Rights Movement (2008), Wendy Wall maintains that the roots of a “consensus culture can be found . . . in the turbulent decade that preceded U.S. entry into World War II.”  (For a similar conclusion about the period Wall identifies, see Robert Putnam on the “Great Convergence,” in The Upswing: How America Came Together a Century Ago and How We Can Do It Again (2020)).

Indeed, after three Republican presidents, beginning with Warren Harding’s election in 1920, the Great Depression helped elect the Democrat Franklin Roosevelt in 1932, a year in which much polarization existed. Robert Dallek in his biography of Franklin Roosevelt states that there “was the deep cultural divide between urban and rural Americans, or modernists and fundamentalists, as they were described.” Moreover, “rural folks who aggressively supported ideas and traditions largely in harmony with their established way of life” felt threatened by the growing dominance of the big cities and southern and eastern European immigrants who had come to the cities before the 1924 National Origins Act discriminated against them and Asians.

But FDR’s resounding victory in 1932, when he carried 42 of 48 states, indicated that a consensus was beginning, that the old Republican preference for limited federal action was inadequate. In 1936, Roosevelt upped his success by winning in 46 states and helping Democrats increase their majorities in both houses of Congress. In 1940 and 1944, although his margin of victory declined from that of the 1930s, he still was easily reelected.

Although Harry Truman proved less popular in 1948 than Roosevelt had been before his death in 1945, many historians believed that a general U.S. consensus remained. The major exception was over the question of civil rights, as southern segregation continued to blemish our nation.

The success of former General Dwight Eisenhower in 1952 and 1956 indicated to many that the broad U.S. consensus endured. As Scott Spillman has indicated in a 2017 article on conflict and consensus, historian Daniel Boorstin “represented perhaps the most unequivocally celebratory expression of what was known as the ‘consensus school,’ which dominated how a generation of historians after World War II thought about their country and its past.” And to Boorstin, Eisenhower, who once said “extreme positions are always wrong,” was “the living embodiment of  . . . American consensus.”

But then, as historian Jill Lepore writes, “What no one could quite see, in 1960 [Eisenhower’s last full year in office], was the gathering strength of two developments that would shape American politics for the next half century. Between 1968 and 1972, both economic inequality and political polarization, which had been declining for decades, began to rise. . . . A midcentury era of political consensus had come to an almost unfathomably violent end. After 1968, American politics would be driven once again by division, resentment, and malice.”

In the last half-century various individuals and factors have increased polarization, among them former Republican House Speaker Newt Gingrich (1995-1999) and the conservative Tea Party movement, which emerged in 2009. Lepore also adds that Internet media feeds people only what they want to see and hear, and social media “exacerbated the political isolation of ordinary Americans while strengthening polarization on both the left and the right.”

Despite this half-century of increasing polarization there were some noteworthy exceptions. Most notable was the ability of Ted Kennedy, one of our nation’s most liberal senators, to work with conservative colleagues like Sen. Orrin Hatch of Utah to pass bills dealing with such matters as HIV-AIDS, children’s health insurance, and volunteer national service. After Kennedy died in August 2009, Hatch stated, “We can all take a lesson from Ted’s 47 years of service and accomplishment. I hope that America’s ideological opposites in Congress, on the airwaves, in cyberspace, and in the public square will learn that being faithful to a political party or a philosophical view does not preclude civility, or even friendships, with those on the other side. . . . We must aggressively advocate for our positions but realize that in the end, we have to put aside political pandering, work together and do what is best for America.”

While Ted Kennedy was still alive an Illinois state senator named Barack Obama delivered the keynote address at the 2004 Democratic National Convention, and called for overcoming Red-state-Blue-state divisions, for overcoming “those who are preparing to divide us.” Later, as president, Obama continued to signal his willingness to work in a bipartisan spirit. Unfortunately, however, this pragmatic president, temperamentally so well equipped to work with Republicans to achieve the common good, discovered little reciprocity from the likes of John Boehner and Mitch McConnell. Among Republicans, John McCain, who died in 2018, was one of the few Republican senators who demonstrated a desire to lessen polarization.

By late 2020, after almost four years of President Trump’s angry polarizing effects, President-elect Joe Biden is following the example of Obama, who for eight years he served as vice-president. Here are the six reasons I think he can reduce our polarization.

1. Reducing it is a major Biden goal. He made this clear a month before the 2020 election when at Gettysburg he stated that he wished to “revive a spirit of bipartisanship in this country, a spirit of being able to work with one another.” A New York Times essay a few days after the election stated “his principal theory of governance . . . [is] that compromise is good and modest progress is still progress.” At about the same time, in Delaware, with ballots still being counted, he said, “The purpose of our politics, the work of the nation, isn’t to fan the flames of conflict, but to solve problems, to guarantee justice, to give everybody a fair shot, to improve the lives of our people. . . . The vast majority of the 150 million [voting] Americans, they want to get the vitriol out of our politics. . . . It’s time for us to come together as a nation and heal. . . . My responsibility as president will be to represent the whole nation. And I want you to know that I will work as hard for those who voted against me as for those who voted for me. . . . We don’t have any more time to waste on partisan warfare.”

2. Biden already has won over some former Republicans and conservatives (see here and here) who prefer him to Trump, and coming from a much poorer background than Trump, he is well positioned to win over some former white working-class Trump supporters. In September 2020, CNBC posted an article entitled “Scranton vs. Park Avenue: Biden leans into his working-class roots to draw a contrast with Trump.”

3. Trump’s polarizing effects as the chief divisive flamethrower will gradually recede, especially after he leaves office in January. Although his false claims that the election has been stolen from him continue to rile up some of his most diehard supporters, others who voted for him think he is behaving too much like a sore loser. Trump’s continuing refusal to concede will just alienate some additional supporters--maybe not many, but at least some. In addition, as a lame-duck president his influence over Republican congresspeople and media outlets like Fox News will dim, his reelection failure reducing his power over both them and their constituents. (This does not mean Trump will, to paraphrase Dylan Thomas, go gently into the good night. It is possible he will continue to battle to remain a major shaper of the Republican Party.)

4. The first major issues Biden will need to face--“COVID, the economy, racial justice, climate change,” are four he mentioned in his above-cited Delaware remarks--are ones amenable to bipartisan compromise. As COVID cases and deaths continue to increase in Trump’s lame-duck presidency, his pandemic leadership failures will become even more apparent. More previous coronavirus skeptics will have to admit, albeit grudgingly, that Trumpian measures were inadequate and a better federal response is needed. Some Republicans, like Maryland Governor Larry Hogan, have already acknowledged this. Their number will increase. Enough bipartisanship existed to pass a first economic stimulus package. Given the public mood, a second package seems inevitable, either before or after Biden’s inauguration. Because Republicans are much less likely than Democrats to acknowledge existing racial injustices, steps to improve this situation are likely to prove more contentious. But, as Hannah Arendt once observed, truth possesses a stubborn staying power. Slowly, way too slowly for many, racial discrimination has decreased. Black Americans are no longer slaves, no longer overwhelmingly denied the vote in southern states. Martin Luther King Day is a national holiday. Regarding climate change, largely caused by humans, there can be no compromise on the need to address it, and to do so vigorously. And most Americans, even if they won’t admit that Trump’s environmental policies were disastrous, recognize that they were inadequate (see, e.g., the Pew poll of mid-2020 that found that two-thirds of those polled thought our nation should be doing more regarding climate change).

5. There is a great longing among the electorate for reducing polarization. As Biden said four days after the election, he believed he had a “mandate from the American people. They want us to cooperate.” After recognizing all the polarization that the election revealed, a post-election Pew analysis concluded: “Voters across the political divide . . . want the next president to govern in a unifying way. In October, 89% of Biden supporters and 86% of Trump supporters said their preferred candidate should focus on addressing the needs of all Americans, even if it means disappointing some supporters. Only around one-in-ten in both camps said their candidate should focus on the concerns of those who voted for him without worrying too much about the concerns of those who didn’t.”

6. Both Republicans and Democrats, conservatives and progressives, can agree on the need (as Joe Biden expressed it) “to put away the harsh rhetoric. To lower the temperature. To see each other again. To listen to each other again.” More than a century ago the Republican Theodore Roosevelt stated something similar with the words “Neither our national nor our local civic life can be what it should be unless it is marked by the fellow-feeling, the mutual kindness, the mutual respect, the sense of common duties and common interests, which arise when men take the trouble to understand one another.”

The six reasons detailed above do not ignore all the roadblocks and possible impediments ahead. But my title only states that the “Odds Are Good that Biden Can Reduce Our Political Polarization.” Dial it back, not completely end it. As our president-elect said, cooperating or not is “a choice we make. And if we can decide not to cooperate, then we can decide to cooperate.”