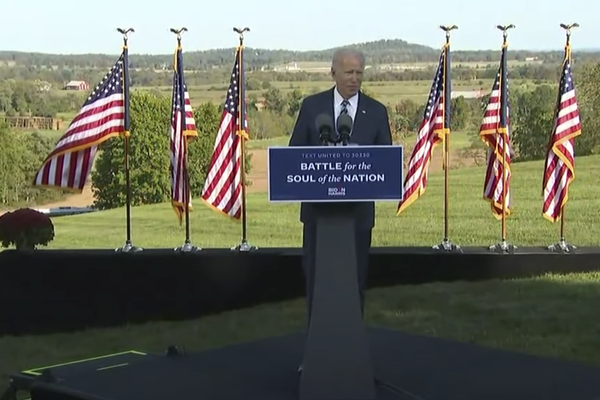 On October 6, Joe Biden gave a 22-minute speech near the famous battlefield of Gettysburg, Pennsylvania. He began it succinctly, “On July 4, 1863, America woke to the remains of perhaps the most consequential battle ever fought on American soil. It took place here on this ground in Gettysburg. Three days of violence, three days of carnage. 50,000 casualties wounded, captured, missing or dead. Over three days of fighting.” In November 1863, President Lincoln came to the battlefield to deliver the Gettysburg Address, which historian James McPherson called “the most famous speech in American history . . . only 272 words in length and took two minutes to deliver,” short enough to be reproduced on the walls of D. C.’s Lincoln Memorial.

On his website Biden displayed the necessary humility, referring to his own speech as only “remarks,” not suggesting that they rose to the level of Lincoln’s Address. About the latter Biden said, “His words here would live ever after. We hear them in our heads, we know them in our hearts, we draw on them when we seek hope in the hours of darkness.” And yet, even though Biden’s “remarks” did not match the oratorical greatness of Lincoln’s Address, they were significant--and timely.

Timely because Biden put himself forward, as he has consistently done this year, as the leader best equipped to unite our fractured nation. Of the many problems facing us, many exacerbated by President Trump, the extreme division separating the Trump supporters from the rest of us is certainly central.

More than any other of the many Democratic candidates earlier in 2020, Biden stressed the need to heal our extreme and festering political divisions. Sometimes, as occurred already in 2019, even to the point of angering other Democrats for being too compromising. The proper balance between political passion, tolerance, and compromise is certainly difficult. But if Biden is correct that this divisiveness (and sometimes even hatred) is a central danger to our nation, then it could be argued, as I have done, that more than anyone else, “Biden has a better chance of unifying our nation and delivering positive long-range results.”

In his Gettysburg speech, alluding to Lincoln’s House Divided Speech of 1858, Biden stated that “once again, we are a house divided. But that, my friends, can no longer be.” He warned of our shipwrecked state being “on the shoals of anger and hate and division.”

Again citing Lincoln’s words, this time his Second Inaugural--“With malice toward none, with charity for all, with firmness in the right as God gives us to see the right, let us strive on to finish the work we are in, to bind up the nation’s wounds”--he pledged to “work with Democrats and Republicans,” to “work as hard for those who don’t support me as for those who do.” For our times of bitter rancor, he offered the balm of trying to “revive a spirit of bipartisanship in this country, a spirit of being able to work with one another.” (For lists of the large numbers of Republicans, already opposing Trump and supporting Biden, including many conservative columnists, see here and here.)

Although Biden did not mention Barack Obama, the leader and friend he worked so closely with for eight years, his remarks also reflected the spirit of the former president. A spirit demonstrated in his keynote address at the 2004 Democratic National Convention, when he was still an Illinois state senator, in which he called for overcoming Red-state-Blue-state divisions, for overcoming “those who are preparing to divide us.” A spirit also demonstrated frequently as president, for example during his 2010 commencement address to University of Michigan graduates, when he told them, “We can't expect to solve our problems if all we do is tear each other down. You can disagree with a certain policy without demonizing the person who espouses it.”

Unfortunately, however, this pragmatic president, temperamentally so well equipped to work with Republicans to achieve the common good, discovered little reciprocity from the likes of John Boehner and Mitch McConnell.

After Donald Trump succeeded Obama matters got worse, in large part due to Trump’s belligerent style, so amply demonstrated by him in his first debate with Joe Biden. It is ironic that many conservatives support Trump, but that Biden seems to realize much better than he the truth of the words of one of the fathers of U. S. conservatism, Russell Kirk (1918-1994): “The prudential politician . . . is well aware that the primary purpose of the state is to keep the peace. This can be achieved only by maintaining a tolerable balance among great interests in society. Parties, interests, and social classes and groups must arrive at compromises, if bowie-knives are to be kept from throats.”

Proceeding further in his speech, Biden linked many of our other most pressing problems with our national divisiveness, with our extreme partisanship. One of these problems is racial injustice. . . “the product of a history that goes back 400 years, to the moment when black men, women, and children were first brought here in chains.”  Recalling recent “peaceful protests giving voice to the calls for justice,” Biden also mentioned “examples of violence and looting and burning that cannot be tolerated.” But unlike President Trump, who stresses only law and order but not racial justice, the former vice president stated that “we can have both,” and that our country needs “leadership that seeks to deescalate tensions, to open lines of communication, and to bring us together.”

He also linked the over 200,000 coronavirus deaths we have suffered to “the deep divisions in this country.” Wearing a mask, social distancing, testing, and developing a vaccine should “follow the science,” he said, and not be politicized. Echoing the rhythm of Obama’s 2004 Democratic Convention keynote address, Biden added, “The pandemic is not a red state versus blue state issue. The virus doesn’t care where you live or what political party you belong to.”

Finally, Biden targeted “the divisions in our economic life that give opportunity only to the privileged few. America has to be about mobility,” the type that enabled Lincoln, a child of the frontier, to “rise to our highest office.”

Throughout Biden’s speech a can-do, optimistic spirit prevails. It emulates not only Lincoln’s words, but also those of Franklin Roosevelt  and Obama.

In his first inaugural address (1933), coming near the height of the Great Depression, FDR said, “This great Nation will endure as it has endured, will revive and will prosper. So, first of all, let me assert my firm belief that the only thing we have to fear is fear itself—nameless, unreasoning, unjustified terror which paralyzes needed efforts to convert retreat into advance.”

Similarly, in his first inaugural address (2009) in the latter stages of the Great Recession, Obama spoke of being in the midst of crises that included a “badly weakened” economy, lost homes, “jobs shed, businesses shuttered,” costly health care,  energy policies that “threaten our planet,” a “sapping of confidence across our land,” and “a nagging fear that America's decline is inevitable, that the next generation must lower its sights.” But Obama assured the nation that these challenges “will be met,” that our nation will choose “hope over fear, unity of purpose over conflict and discord.”

More than a decade later with our inner political conflict and discord worsened by eight years of Trumpism, Biden at Gettysburg urged us to “talk to one another,” to  “respect one another,” to “love each other.” He promised to be a president that would “embrace hope, not fear. Peace, not violence. Generosity, not greed. Light, not darkness.” A president that followed the example of “Lincoln and Harriet Tubman and Frederick Douglass,” that represented an America that “welcomed immigrants from distant shores,” and broadened opportunities for women, minorities, and gays. A president that embraced “the dreams of a brighter, better, future.”

Near the end of his speech Biden once again echoed the spirit of Obama’s 2004  keynote address at the Democratic National Convention. “We can,” said Biden, “end this era of division. We can end the hate and the fear. We can be what we are at our best: the United States of America.”