Reckoning with Marcus Whitman and the Memorialization of Conquest

Cassandra Tate is a staff historian for www.historylink.org, an online encyclopedia of Washington state history. She is the author of Cigarette Wars: The Triumph of ‘The Little White Slaver’ and Unsettled Ground: The Whitman Massacre and Its Shifting Legacy in the American West. 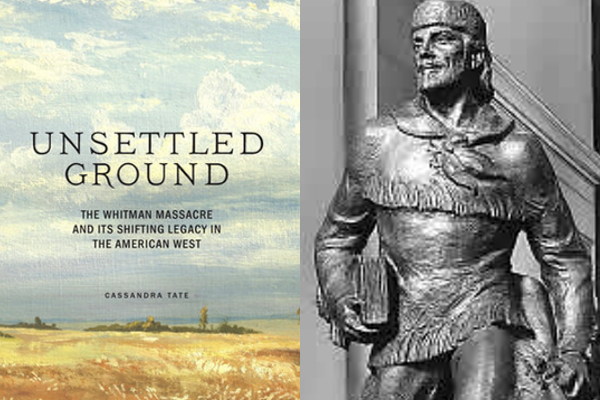 The National Statuary Hall Collection in the Capitol in Washington DC is crowded with embodiments of white supremacy. The collection, which consists of two statues donated by each state, includes Jefferson Davis, president of the Confederacy, installed by Mississippi in 1931. Alexander Hamilton Stephens of Georgia, vice president of the Confederacy, stands opposite Davis. Stephens described the Confederacy as founded on “the great truth that the negro is not equal to the white man.” John C. Calhoun, who represents South Carolina, defended slavery as a “positive good” that had elevated “the black race.”

No fewer than eleven former heroes of the Confederacy are enshrined in the Statuary Hall and other parts of the Capitol.They share space with many other defenders of white supremacist ideology, including Andrew Jackson, one of Tennessee’s honorees, who pushed Congress to pass the Indian Removal Act of 1830, forcing more than 100,000 Indians to leave their homelands in the South to make room for white settlers. Junipero Serra, an eighteenth-century friar, imprisoned and abused indigenous people who refused to convert to Christianity. A bronze statue of him, a cross held high in one hand, was placed in the Capitol by California in 1931.

And then there’s Marcus Whitman, a nineteenth-century Protestant missionary, promoter of the colonization of the American West, and, inexplicably, the hunkiest denizen of Statuary Hall. Donated by Washington state in 1953, Whitman’s statue depicts him as a ripped, muscular frontiersman, nine feet of gleaming bronze atop a seven-ton block of polished granite. He appears to be striding resolutely along an unbroken trail, one foot higher than the other, buckskins taut against linebacker thighs. His strong jaw is neatly bearded, his flowing locks topped by a beaver-skin hat; he holds a Bible in one hand, saddlebags and a scroll in the other.

The statue personifies Whitman’s place in the mythology of the West, not the realities of his life. The only feature that can be verified as historically accurate are the saddlebags, which were copied from a pair he used when he was an itinerate physician in upstate New York in the early 1830s. He left them behind when he was appointed a missionary in 1835. They ended up in the Presbyterian Historical Society in Philadelphia. Sculptor Avard Fairbanks studied them when he was designing what is otherwise a fanciful imagining of Marcus Whitman.

In 1836, Whitman and his wife, Narcissa, traveled west with another missionary couple to what was then called Oregon Country -- a vast region consisting of the present-day states of Oregon, Washington, Idaho, and parts of Montana and Wyoming. The Whitmans established a mission on Cayuse Indian land near today’s Walla Walla, Washington. Relations between the couple and their hosts were initially cordial but soured over time. The Whitmansexpected the Cayuse to be eager to convert to Christianity, take up farming, and live like white people. The Indians were interested in some aspects of the newcomers’ culture and religion, but only to supplement, not replace, their traditional beliefs and way of life.

The Whitmans eventually gave up trying to “save” Indians and shifted their focus to promoting white emigration to Oregon Country. Whitman put it bluntly in a letter to relatives in New York in 1844. “I have no doubt our greatest work is to be to aid the white settlement of this country,” he wrote.

The Cayuse watched with increasing alarm and resentment as more and more whites moved through their territory, using up scarce firewood, killing game without permission, and depleting grasses needed for Indian horses and cattle. Between 1843 and 1847, nearly 10,000 settlers traveled overland to Oregon Country in rut-making wagon trains. “The Indians are amazed at the overwhelming numbers of Americans coming into the country,” Narcissa Whitman wrote to her parents in the summer of 1847. “They seem not to know what to make of it.”

More than 70 people had settled in for the winter at the Whitman Mission in November 1847, most of them emigrants who had arrived that fall and were too weary, sick, or destitute to continue their journey west until the spring. Their arrival coincided with a virulent epidemic of measles among the Indians. An estimated 30 of the 50 or so Cayuse living in a village close to the mission died between the first week of October and the end of November. Most of the dead were children. The tribe as a whole lost perhaps a third of its members to measles. The disease also swept through the mission community, sickening several young adults and at least a dozen children, but only one (a six-year-old girl) died. Whitman tried to treat everyone who was sick, but the fact that nearly all of his white patients recovered while his Indian patients died convinced some Cayuses that he was deliberately poisoning Indians in order to give their land to white setters.

On November 29, 1847, a group of Cayuse -- fourteen to eighteen by most estimates -- attacked the mission, killing the Whitmans and 11 male emigrants in what became known as the Whitman Massacre. Congress responded to news of the attack by passing a long-delayed bill establishing the Territory of Oregon. The bill had been stalled for more than two years by a debate over whether slavery would be permitted in the new territory. (In the end, it was not). The “massacre” served as a rallying cry for a two-year war of harassment and retribution against not only the Cayuse but any Indians suspected of being allies or sympathizers. Finally, in the spring of 1850, five Cayuse surrendered to the territorial government and were hanged.

The Whitmans were virtually canonized in the years after their deaths. Local historical societies and community boosters placed plaques, monuments, and roadside markers honoring the couple in ten states and the District of Columbia. Whitman himself became one of the most memorialized figures in the Northwest. A county, a college, a national forest, half a dozen public schools, and numerous other enterprises carry his name. His former mission was preserved as a National Historic Site.

The pinnacle came in 1953, when the bronze Whitman was installed in Statuary Hall. Supreme Court Justice William O. Douglas gave the keynote speech. Douglas (later a liberal icon) was a graduate of Whitman College, established in Walla Walla in 1859 as a “living monument” to the missionary. He praised Whitman’s role in promoting white settlement, called him a martyr, and deplored the “treachery” of the Indians who killed him.

Now, during a national reckoning over who and what should be commemorated in America, Whitman’s halo has slipped. A Seattle legislator introduced a bill last year to replace the statue with a more contemporary hero. The bill died in committee but supporters have vowed to bring it up again. A bronze copy of Whitman’s statue on the outskirts of Whitman College has been vandalized several times. The city of Walla Walla, which owns the statue, is wrestling with the question of what to do with it.

Last summer, the House of Representatives voted to remove all the Confederate statues from the Capitol and send them back to their home states or to the Smithsonian. The measure passed with an unusual display of bipartisanship: 305 to 113. Senate Majority Leader Mitch McConnell (R-Kentucky) has thus far refused to introduce it to the Senate, calling it an attempt to “airbrush the Capitol." Still, the momentum seems to be on the side of banishing symbols of white supremacy from the public square.

But what to do with the statues, once they are forklifted away? Perhaps they could all be moved into a special museum. Call it the Hall of Fallen Heroes. Exhibit text would explain who the ex-honorees were and when, why, and by whom they were celebrated. Context is everything. Most of the Confederate statues are products of the Jim Crow and early Civil Rights eras. They romanticized the Confederacy as a noble and heroic “Lost Cause” and downplayed the role of slavery in the Civil War. They also served as not very subtle tools of intimidation to black and brown people who were trying to assert their civil rights.

That same period (roughly 1890s through 1950s) saw the proliferation of monuments idealizing the virtues and sacrifices of while colonizers in the American West, including the Whitmans. These memorials ignored the impact of conquest on indigenous peoples. Glorifying the pioneers was a way to justify what had been done in the past and perhaps ease anxieties about the future -- the solidity of stone and metal suggesting that the sons and daughters of the pioneers would continue to prevail.

There’s a delicate balance between preserving monuments to the past and respecting the changing values of the present. But the memorial landscape is haunted by the ghosts of slavery and the legacy of colonialism. It’s past time to move toward a more honest and nuanced accounting of American history.

[i] Mike DeBonis, “A Field Guide to Racists in the Statuary Hall,” Washington Post, June 23, 2015 (https://www.washingtonpost.com/news/post-politics/wp/2015/06/23/a-field-guide-to-the-racists-commemorated-inside-the-u-s-capitol/)