Brian M. Puaca is a Professor of History at Christopher Newport University in Newport News, Virginia and the author of Learning Democracy: Education Reform in West Germany, 1945-1965. 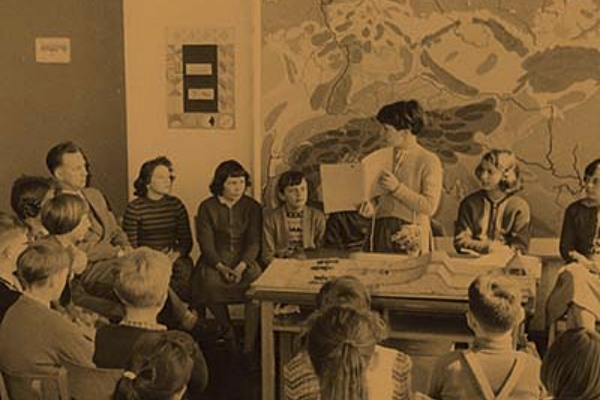 In the aftermath of the Second World War, American soldiers embarked on a massive project of educational reform in the ruins of postwar Germany. Their ultimate objective was to democratize a population that had been indoctrinated during the previous twelve years spent living – and learning – under a dictatorship. From their very first days in power, the Nazis had used the schools to promote nationalism, spread their racist ideologies, and prepare a new generation for war. Of special interest to the Nazis was history instruction, which they rewrote to facilitate the creation of uncritical, ill-informed subjects willing to follow the orders of their Fuehrer. And so American officers, working with professional historians and educators –both American and German – worked to establish new history instruction in the German schools that would bolster the emerging democratic order under construction.

On September 17, President Trump announced a new commission to promote “patriotic education” and criticized the “twisted web of lies” currently taught in American classrooms. In the face of history teaching that he said resembled “anti-American propaganda,” the president desired to see instruction return to a focus on political elites in an effort to present “the miracle of American history.”  While the federal government does not control the history curricula taught in the schools -- this is the domain of the states -- it can make recommendations, offer grants, and encourage new approaches. The president clearly hopes his 1776 Commission will offer a set of guidelines that can stop what he deems the “indoctrination” underway in our schools. Fortunately for this newly established group, the successful strategies the U.S. pursued to eliminate Nazi propaganda and promote democracy in the German schools are easily accessible – and surprisingly relevant – to those who are interested.

Should the new commission investigate America’s educational work in Germany, it would likely be shocked by what it would find. First, American officials advocated a new generation of textbooks that promoted discussion and debate. Utilizing a wealth of primary sources to foster critical thinking and analysis, these new publications reduced the emphasis on rote memorization and teacher-centered instruction. Second, they demanded that history instruction illustrate the successes of the German nation as well as its shortcomings and the challenges with which it still grappled. As one might imagine, history was a particularly difficult subject for those who wished to avoid discussions of the recent past. Third, American officials encouraged German educators to shift the focus of their instruction. Whereas previously war, political elites, and the nation had stood at the center of the narrative, American officials recommended that teachers concentrate on Germany’s larger role in European history, the diversity of Germany’s population, and social and cultural approaches to understanding the past. Here the voices of non-elites entered the curriculum, in many cases, for the first time.

These reforms made a significant impact on a German nation seeking to combat a legacy of racism, extreme nationalism, and militarism. Educational changes inaugurated during the occupation helped to eliminate the propagandistic instruction that produced uncritical subjects and gradually transformed them into engaged citizens. Yet the recommendations of American education officers in Germany have lost none of their relevance in the seven decades that have passed. Most Americans would probably agree that the creation of informed and engaged citizens willing and able to participate actively in our democratic society is one of the principle goals of our educational system. In light of the president’s concerns, now seems like the perfect time to revisit the work of these dedicated men and women who worked to institute social and cultural change abroad. As the new 1776 Commission begins to consider how to wield history as a weapon against indoctrination, America’s educational work in Germany can serve as a guidepost. The strategies employed in postwar Germany are not likely what the president has in mind, but they undoubtedly reflect a commitment to preparing vigilant young men and women to build and defend a new democratic state. What better way is there to reinvigorate and renew our own democracy at a time when informed and engaged citizens have never been more needed?