David K. Graham (david.graham@snow.edu) is an assistant professor of history at Snow College in Utah. His research focuses on the Civil War in American memory. He is author of Loyalty on the Line: Civil War Maryland in American Memory (Athens: University of Georgia Press, 2018).  His second book project centers on post-Civil War reunions.  You can follow him on Twitter: @DavidKGraham. 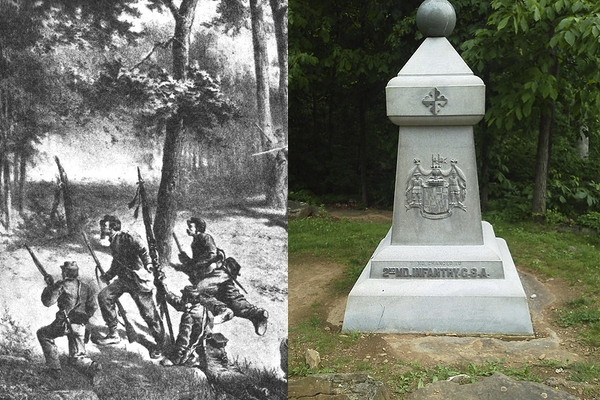 2,000 veterans and civilians gathered at Gettysburg on November 19, 1886 to witness a historic moment.  On this day, the first Confederate monument on the Gettysburg battlefield was unveiled, the 2nd Maryland Confederate Infantry Monument.  Captain George Thomas had the honor of giving the dedicatory address.  Citing the “bitterness and heartburning” of the Civil War, Thomas noted the incredibility “that the men of the South could be here to perpetuate by monumental record the memory of their own achievements.”  As he neared the end of his forty-five-minute speech Thomas contended that history of Gettysburg now belonged “to no section, and to no time” but was, rather, a “joint heritage of the North and of the South.”

For nearly three years, the 2nd Maryland Confederate Infantry monument sat without controversy.  The fall of 1889, however, witnessed a fury of anger with regard to the monument.  The multiyear delay in a response is most likely due to the fact that most Union veterans did not know about the regimental monument until they saw it with their own eyes at the 25th anniversary of the Battle of Gettysburg in the summer of 1888.  The Pittsburgh-based Abe Patterson Post of the Grand Army of the Republic (GAR), with the backing of the governor of Pennsylvania, put forth a formal protest and resolution concerning the first Confederate Gettysburg monument.  The GAR was the largest Union veteran fraternal organization throughout the second half of the nineteenth-century.

The Pittsburgh GAR Post did not pull any punches in its condemnation of the monument.  “The survivors of the Second Maryland rebel regiment have erected on the battlefield of Gettysburg, within four feet of the monument erected by a loyal Maryland regiment, a monument commemorating the disloyal deeds of said rebel regiment,” the resolution began.  Concerned about precedent, the Patterson Post argued that if the monument was allowed to stand “there is every indication that other rebel organizations and regiments will, if permitted, follow the example, and thus make treason honorable.”  The John C. Dickey GAR Post of Greenville, Pennsylvania issued their own resolution in agreement with the Abe Patterson Post and when asked, Governor James Beaver of Pennsylvania stated unequivocally, “I am and was always opposed to any rebel organization erecting its monuments within the grounds of the association [Gettysburg Battlefield Memorial Association].”

Confederate veterans and other white southerners quickly learned of the protest to the monument and did not shy away from sharing thoughts of their own.  A scathing editorial appeared in the Winchester Times, a Virginia newspaper, with the title, “They Are Good Haters.”  The piece began by noting the frequency of the “bitter hatred manifested by northern soldiers against those of the South.”  The editorialist posited that the dedication of the 2nd Maryland Confederate Infantry Monument was “worse than shaking a red flag at a mad bull.”  The Winchester Times piece reduced the Abe Patterson Post resolution as nothing more than “an opportunity to display their hatred of the soldiers who fought so bravely against them 25 years ago.”  The tone of the article became much more personal and targeted with lines such as “The opinion of Abe Patterson Post, fortunately, doesn’t have a great deal of weight, and certainly cannot affect those at whom it is aimed.”  Speculating on the makeup of its membership, the author suggested, “Abe Patterson Post is probably composed chiefly of bummers” and that “Manliness is at a discount among its members.”

Despite the protest, the Gettysburg Battlefield Memorial Association (GBMA) did not remove the monument.  John M. Krauth, the secretary of the GBMA, stated in aftermath of the Patterson Post resolution that “the question of removal...from the field has not been entertained or considered by the association.”  The author of an article in Columbus Enquirer, a Georgia newspaper, referenced this decision by the GBMA and remarked, “Abe Patterson Post may now crawl into their hole and keep quiet.”  Not two years later, Maryland Union veterans returned to Gettysburg to dedicate their own monuments.

The 2nd Maryland Confederate Infantry Monument survived the GAR criticism and still stands on the Gettysburg battlefield today.  Modest in size and not as prominent as the state Confederate monuments, thousands walk by the small obelisk not knowing its place in the history of Civil War commemoration.  Despite its diminutive appearance, the 2nd Maryland Confederate Infantry Monument started the process of Confederate memorialization on the United States’ most famous battlefield.  That memorialization process has certainly evolved since 1886 and is not solely tied to monument dedications.  On July 4, 2020, conservative militias and neo-Confederates flocked to Gettysburg National Military Park, armed with Confederate flags and waving their assault rifles.  In the aftermath, videos of hostile diatribes and hateful language directed toward peaceful protestors surfaced on social media.  Why did these militias choose Gettysburg?  Why did they descend on a state that remained loyal to the United States during the Civil War?  We should applaud the decision of the NPS to add interpretative panels to the state Confederate monuments at Gettysburg, for the Abe Patterson GAR Post was right.  On some level, and to some people, Confederate memorialization at Gettysburg has made “treason honorable.”