Jacob Zenn is an adjunct assistant professor on African Armed Movements at Georgetown University’s Security Studies Program and a senior fellow on African Affairs at The Jamestown Foundation in Washington DC. He is author of Unmasking Boko Haram: Exploring Global Jihad in Nigeria, published in April 2020 by Lynne Rienner Publishers in association with the Handa Centre for the Study of Terrorism and Political Violence, University of St Andrews. He holds a J.D. from Georgetown Law, where he earned the commendation of a Global Law Scholar. 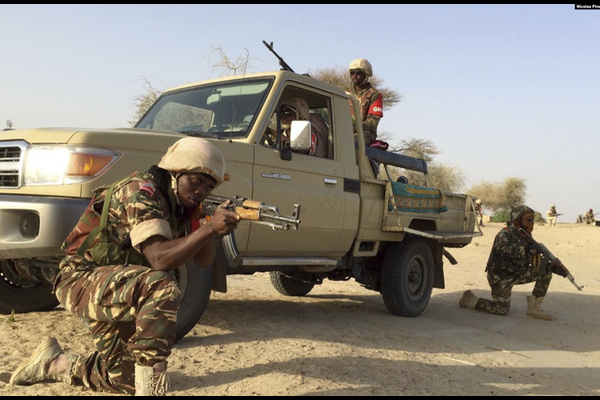 The jihadist group Boko Haram has long been described as a Nigerian movement. Yet, today its main faction—Islamic State in West Africa Province (ISWAP)—fields fighters in five countries outside Nigeria--Burkina Faso, Cameroon, Chad, Niger, and Mali.

Is this aberrational or the natural evolution of a group whose history is rooted in West African jihadist networks? When researching for my book, Unmasking Boko Haram: Exploring Global Jihad in Nigeria, I uncovered sources tracing Nigerian jihadism’s origins to Algerian jihadists’ arrival in Nigeria in 1994. This demonstrated  pan-West African scope represents continuity with ISWAP’s founding.

In 1992, after the western liberal-capitalist “victory” in the Cold War, Algeria was among the first African countries to hold democratic elections, which its military rulers believed would legitimate their rule. However, when an Islamist political party was about to win, the military cancelled the elections. Algerian Islamists then joined Algerian veterans of the 1980s anti-Soviet Afghan jihad to wage jihad against Algeria’s own rulers.

Usama bin Laden, who funded the Afghan jihad, relocated to Sudan in 1991 and directed Algerian Afghan jihad veterans to establish bases in Sahelian countries, including Mali and Niger, to smuggle weapons into Algeria. However, Algeria provided intelligence to Mali and Niger, enabling them to track Algerian jihadists. After two envoys sent by Bin Laden from Sudan to Niger were arrested in 1994, an Afghan jihad veteran called Uncle Hassan fled from Niger, where he doubled as an Islamic charity director, and became the first Algerian jihadist to arrive in Nigeria.

There were also pro-Saudi Salafis led by Jaafar Mahmud Adam. He preached about Islam’s incompatibility with democracy and became Yusuf’s mentor in 1995 after Yusuf left al-Zakzaky when al-Zakzaky formally announced his Shiism. Meanwhile, other Nigerian Salafis lionized Bin Laden, especially after 9/11, including the preacher who hostedUncle Hassan in Nigeria in 1994.

Despite widespread pro-sharia agitation since the 1970s, Nigerian Muslims rarely called for jihad to overthrow Nigeria’s secular government through force, until 1994. When Uncle Hassan arrived in Nigeria, however, he recruited youths to smuggle weapons and fight in the Sahel, where some were “martyred.” Concurrently, Nigerians studying in Sudan, especially one named Muhammed Ali, met Bin Laden’s deputies, returned home, and recruited other Nigerians to train in Sudan’s paramilitary camps or the Sahel.

By 9/11, Uncle Hassan’s and Muhammed Ali’s networks, including their university student recruits and Muhammed Yusuf’s followers coalesced in the short-lived “Nigerian Taliban,” which was destroyed in clashes with Nigeria’s security forces in 2003. This resulted in the deaths of Muhammed Ali in Nigeria and Uncle Hassan near the Mali-Niger border, alongside his son and Ali’s financial partner, who was a Saudi-born Nigerian. Muhammed Yusuf avoided the clashes by fleeing to Saudi Arabia. Yet, upon returning home, he led both his and late Ali’s followers, despite Ali having declared him an infidel for arguing in 2003 that jihad was premature.

Until 2009, Yusuf preached about jihad, sharia, and opposing Nigeria’s constitution and Western education. His followers, therefore, earned the nickname “Boko Haram,” meaning “Western education is sinful” in Hausa language, despite Yusuf never giving his followers any formal name. Yusuf was popular because other Islamic movements, including al-Zakzaky’s and Jaafar Mahmud Adam’s, abandoned goals of radically changing Nigeria when they realized the goal was  impossible short of all-out war. Adam himself was also assassinated by late Ali’s followers in 2007.

Shekau eventually pledged loyalty to AQIM’s more extreme rival, Islamic State, in 2015, and Jamaat Ahlussunnah lid-Dawa wal-Jihad rebranded as ISWAP. However, Shekau was deposed in 2016 by Muhammed Yusuf’s son, Abu Musab al-Barnawi, who believed Shekau was too ruthless in killing Muslim civilians who chose not to wage jihad. Unlike Shekau, al-Barnawi also never disavowed al-Qaeda and even welcomed Nigerian-trained AQIM members into ISWAP. This leads to the argument in my book that al-Barnawi’s “pro-al-Qaeda tendencies” and Islamic State’s reorganizing ISWAP to include anti-AQIM jihadists in Burkina Faso, Mali, and northwestern Niger in March 2019 explains why al-Barnawi was removed from ISWAP leadership that same month.

In practice, ISWAP’s fighters around Lake Chad in southeastern Niger, Nigeria, Cameroon, and Chad, who were formerly led by al-Barnawi, are geographically separate from ISWAP’s fighters in Burkina Faso, Mali, and northwestern Niger, whose commander is a Western Saharan AQIM defector. Nevertheless, the United Nations and a longtime Nigerian “insider” journalist’s research team found that ISWAP’s two contingents are coordinating. This would not be uncharted territory for Nigerian jihadists, whose movement emerged through Nigerians’ interactions with Sahel-based jihadists.

ISWAP’s two contingents are also interconnected in other ways. When Shekau left ISWAP in 2016, he relaunched Jamaat Ahlussunnah lid-Dawa wal-Jihad, which killed 92 Chadian soldiers at their Lake Chad base in March 2020. This prompted Chad’s president to withdraw troops planning to fight ISWAP in Burkina Faso, Mali, and northwestern Niger and redeploy them to Lake Chad. Ironically, Chad has destroyed ISWAP’s Lake Chad-based camps in retaliation, despite ISWAP and Jamaat Ahlussunnah lid-Dawa wal-Jihad being sworn enemies.

ISWAP’s pan-West African scope has caught scholars by surprise because the group’s origins have been shrouded in mystery. Indeed, only in 2017 did an AQIM member first pen a memoir mentioning Uncle Hassan. It was corroborated by a Nigerian intelligence officer’s assessment and overlooked French media reports from the mid-2000s. Moreover, Muhammed Ali’s financial ties to al-Qaeda were only exposed when the leader of Nigeria’s lone al-Qaeda-loyal jihadist group wrote an article discussing Ali in 2017. Furthermore, Muhammed Yusuf’s son published a book describing Ali’s followers’ Shekau-like ruthlessness as recently as 2018, and my colleague interviewed Ali’s companion only last year. This revealed previously unknown details about Ali’s experiences in Sudan with Bin Laden’s deputies.

Histories of clandestine organizations like ISWAP often become transparent years after events occur. This requires historians of jihadist and other clandestine movements to be patient and yet vigilant when authoring histories. It is likely that even more details on Uncle Hassan and Muhammed Ali have yet to emerge.

Nevertheless, what currently available evidence suggests is ISWAP is historically, ideologically, and militarily capable of threatening West African armies. Its current scope is not aberrational, but rooted in the group’s origins. Whether ISWAP achieves its goal of creating a pan-West African jihadist state, or fails while trying, is something historians must also patiently observe.