How the Specter of Andrew Johnson Haunts Donald Trump 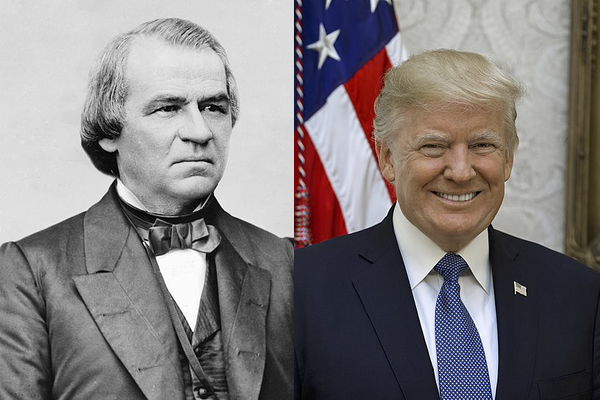 A drama of monumental proportions and historic significance is unfolding every day in Washington, DC. There are endless predictions and speculation by politicians, pundits, and the people about whether Donald Trump will join the ranks of Andrew Johnson and Bill Clinton as the only presidents impeached. As a presidential historian, I naturally began to think about the past and how it relates to our present moment. In thinking about Johnson, I was surprised to find that he and Trump are cut from the same cloth. While Trump may revel in comparing himself to Andrew Jackson, it is actually Andrew Johnson – certainly not the most admirable or respected of our presidents – with whom he shares six eerie similarities.

1. Neither Andrew Johnson nor Donald Trump ever expected to be president.

Johnson was a politically convenient vice-presidential candidate for Abraham Lincoln as Lincoln sought a second term in 1864. Johnson was a staunch Union loyalist, a Democrat from Tennessee, which had left the Union in 1861. The presence of a Democrat on the ticket bolstered Lincoln’s campaign message of national unity. It was a politically strategic move for Lincoln to help him win another four years as president. But Johnson was just the vice-president – “the most insignificant office that ever the invention of man contrived or his imagination conceived,” to use the words of a frustrated John Adams.

Certainly, vice-presidents John Tyler and Millard Fillmore had ascended to the presidency due to the death in office of William Henry Harrison and Zachary Taylor, respectively, but at 56, Lincoln was relatively healthy, despite having significantly aged because of the stress of the Civil War. Surely, he would complete a second term if elected. No president had ever been assassinated. So, Andrew Johnson, with elective and appointive government positions dating back decades, settled in to warm the vice-presidential chair, never expecting that he would be suddenly thrust into the presidency.

Like Johnson, Donald Trump never expected to be president. He ran in 2016 as a publicity and profit-making stunt to promote the Trump brand of businesses, and to gear up for launching a Trump media organization. He campaigned against 16 formidable Republicans also vying for the Republican nomination, all of whom had more experience governing than the real estate mogul and reality TV show host. In the general election, Trump was pitted against Hillary Clinton, one of the most experienced candidates ever to seek the presidency. In the end, on the night of November 8, 2016, none of that mattered as a shocked Trump – despite devastating disclosures of mistreatment of women and breaking all precedents of normal behavior – was elected president.

2. Both Johnson and Trump ascended to the presidency in times of great national unrest.

Johnson presided over the aftermath of the Civil War that had militarily, economically, and racially pitted the north against the south, while Trump strategically re-ignited the bitter flames of the culture wars to win the presidency. His fear-based campaign pitted blue states against red states – Americans against Americans (and the rest of the world). It’s striking that the current blue/red state geography isn’t all that different from the north/south map of the 1860s. And the nation is more divided and polarized today than perhaps at any time since the Civil War.

3. Both Johnson and Trump followed presidents from Illinois whose eloquence they failed to match.

Abraham Lincoln and Barack Obama were two of the most articulate, measured, and thoughtful presidents the nation has produced, and both hailed from Illinois. Neither Johnson nor Trump were similarly blessed with such eloquence, but instead exhibited all the tendencies of a demagogue.

In 1866, Harper’s Weekly described President Johnson: “His exhibition of temper, his intemperate, and often indecent, denunciation of his political opponents remind us rather of the demagogue than of the unimpassioned and well-balanced statesman.” When speaking before the “masses,” as Johnson like to call the people, “his speeches are disconnected, full of repetitions, and not even his official position as Chief Magistrate of the United States is sufficient to keep him within the limits of good sense and decorum.”

If we didn’t know any better, we could easily imagine that Harper’s Weekly was describing Trump’s fiery rhetoric that easily fits the definition of a demagogue as “a political leader who seeks support by appealing to the desires and prejudices of ordinary people rather than by using rational argument.” Trump’s language is not reasoned, measured, or eloquent. He repeats simple words – seemingly at a loss for anything more articulate - that are designed only to spark raw and angry emotions and not engage minds.

4. Temperamentally, both Johnson and Trump could be described as belligerent.

As the sun set on the first day of 1849, President James K. Polk confided to his diary his feelings about then congressman Andrew Johnson. Earlier that day, he had seen the Tennessee legislator in the crowd at the Executive Mansion reception but hadn’t spoken to him. Nevertheless, after less than five years in Washington, Johnson’s reputation was well-known, and Polk wrote that the 41-year-old congressman was “very vindictive and perverse in his temper and conduct.”

Similarly, Trump has upended all common decency by viciously attacking anyone who takes a position that threatens his world view or who makes any negative comments about him. He is, in his own words, a “counterpuncher,” who reacts rather than reasons. He has ridiculed foreign allies and leaders, dubbed the media as “the enemy of the people,” stirred up the passions of his base against those who look, speak, and worship differently than the white America of the 1950s, berated his own attorney general as “disgraceful” and “mentally retarded,” claimed his former secretary of state was “dumb as a rock,” and brought the world to the brink of nuclear war by blasting North Korea’s leader as “Little Rocket Man.”

5. Johnson and Trump share a common aversion to facts.

Both men kept their distance from truth, lest somehow reality get in the way of their desired political narrative. In May 1868, General Ulysses S. Grant sat down to chat with a Republican senator. The conversation turned to the esteemed general’s opinion about the political question that was consuming Washington: should the president be convicted of impeachment? Grant bluntly lobbied the senator, John B. Henderson of Missouri: “I would impeach him if for nothing else than because he is such an infernal liar.” Henderson ultimately disagreed and was one of 19 votes to acquit the president and keep him in office.

If Grant considered that Johnson was an “infernal liar,” what would he think about Trump? It is probably no exaggeration to say if the ghost of the Civil War general found himself suddenly transported to Washington today, he would quickly and vocally assert that Trump is also an “infernal liar.” Trump makes liberal and shameless use of hyperbole, grounded only in the narrative he wants to believe in the moment, regardless of any external realities. According to the Washington Post, Trump has uttered or tweeted more than 10,000 false and misleading claims (lies) since his fact-free presidency began, undoubtedly dwarfing Andrew Johnson’s record.

6. The specter of Johnson’s impeachment threatens to envelop the 45th president as well.

On the 1,046th day of Andrew Johnson’s hapless presidency, the House of Representatives voted to impeach him – forever dubiously enshrining his legacy. In less than six months (or December 1, 2019), the similarly bombastic Donald Trump will have been in office for 1,046 days. Does the president get cold sweats as he hears Johnson’s footsteps following him in the White House – fearful that what most defined Johnson’s presidency will also define his?

Johnson, of course, was the first president to be impeached and yet managed to survive being evicted from the presidency by one vote in the Senate. At this point, Trump’s margin of senatorial support of loyal Republicans is probably much larger. But if “smoking gun” facts emerge Trump could, in fact, find himself the first president removed from office by Congress. Only time will tell.

The actions that led to Johnson’s impeachment are eerily similar to Trump’s behavior. Johnson incurred the wrath of Congress for defying the institution, specifically for violating the Tenure of Office Act that required congressional approval before dismissing a cabinet official. Trump has also defied Congress by refusing to allow officials or former officials to respond to congressional subpoenas and requests for documents. In both instances, there have been titanic battles between the two branches of government.

Both Andrew Johnson and Donald Trump can be characterized as belligerent demagogues lacking eloquence or a commitment to truth. They both unexpectedly became president and in times of great national unrest. Finally, serious discussion of impeachment is haunting Trump. When the history books are written, impeachment may define Trump’s presidency in a similar way that “impeachment” and “Andrew Johnson” are solidly and forever linked together. 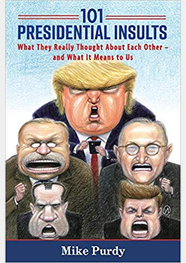