Donald Trump Is No Richard Nixon 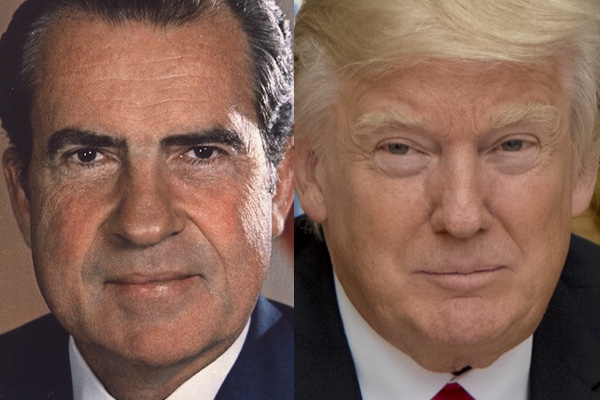 A half century ago this November, Richard Nixon was elected the 37th President of the United States.

A half century later, Donald Trump is in the last months of his second year in the Presidency, and Richard Nixon’s historical image has grown dramatically more positive.

One might say how that can be, since Richard Nixon was forced out of office, resigning in August 1974, due to the Watergate Scandal and the Supreme Court decision of US V. Richard Nixon in July 1974. Nixon has had a horrible historical reputation for his many sins and shortcomings, and his engagement in criminal activities unmatched or surpassed, UNTIL Donald Trump became President.

The point here is that Richard Nixon, with all of his negative and detracting policies, actions, and statements now looks far better than Donald Trump, and it is important to note that reality.

Richard Nixon did not set out to destroy our foreign policy, and in fact, improved it dramatically with the promotion of détente with the Soviet Union, the overture to the People’s Republic of China, and the nurturing of close ties with America’s allies in NATO. He had a mastery of foreign policy based on great experience from his Vice Presidential years onward for which he is often remembered aside from Watergate. This does not excuse the lengthening of the Vietnam War, or the terrible decisions on foreign policy regarding Chile, Greece, and the issue of the Indo-Pakistan War (which is associated with the creation of the nation of Bangladesh). But Donald Trump has been totally destructive in foreign affairs, alienating our allies in NATO, antagonizing all nations with his protectionist tariff policies, and consorting with authoritarian dictators including Vladimir Putin, Kim Jong Un, and the leaders of such other nations, as the Philippines, Turkey, Egypt, and Saudi Arabia. Trump has also worsened relations with Iran and Cuba, based upon extremist right wing influences of John Bolton and Mike Pompeo. The Middle East has become much more unstable. The US Foreign Service itself has been badly damaged by the inconsistencies and instability of Donald Trump.

Richard Nixon had many battles and conflicts with the Democratic-controlled Congress during his years in the Presidency, and yet managed to sign into law many signature measures that built upon the accomplishments of the Great Society of his predecessor, Lyndon B. Johnson. These included the establishment of the Environmental Protection Agency, the Consumer Product Safety Commission, the Occupational Safety and Health Administration, the National Oceanic and Atmospheric Administration, and the enactment of Affirmative Action in employment and education. Donald Trump, in contrast, has been backtracking, destroying environmental protections, undermining consumer agencies, rolling back labor rights, ignoring scientific advancements, and curtailing civil rights. The Republican Party itself has become a willing participant in the destruction of these major domestic accomplishments of Richard Nixon.

Richard Nixon also promoted the concept of welfare reform, including the expansion of the Food Stamp Program, and attempted, though he failed, to advance health care reform. Donald Trump, on the other hand, has wished to destroy the health care plan represented by ObamaCare, stranding millions of people without health care, and offering no alternative, in collusion with a Republican Party far to the Right of what it was in Nixon’s time in the Oval Office. Additionally, Richard Nixon expanded Social Security, Medicare and Medicaid, and initiated Supplemental Security Income (SSI) for the elderly and disabled, all programs now in danger from Trump and the GOP.

Though there’s no denying that Nixon put in office people with lax ethics like John Mitchell, H. R. Haldeman, and John Ehrlichman, he also had made many impressive appointments. Henry Kissinger remains a very controversial figure in foreign policy, but is certainly more significant than Mike Pompeo or John Bolton. Nixon cabinet officials Walter Hickel, George Shultz, Elliott Richardson, George Romney, and John Volpe stand in contrast with the lackluster appointees in the Trump administration. Trump has arguably the worst, most corrupt cabinet in history, with such members as Steven Mnuchin, Ryan Zinke, Scott Pruitt, Betsy DeVos, Jeff Sessions, Ben Carson, Wilbur Ross, Tom Price, and Mick Mulvaney. These cabinet members have been implicated in conflicts of interest and financial irregularities and abuse of their offices.

Nixon may have used foul language in the Oval Office, and in private expressed racist and anti-Semitic language as shown on the Watergate tapes, but he was careful to avoid bigoted language in public. And he did not openly embrace white supremacist groups. Nixon may have been prejudiced against immigrants from some nations, but he never pursued an open policy of nativism or promoted hate groups. He did not bar any nation’s people from migration to America. Nixon may have had an “enemy’s list” but he did not openly advocate taking legal action against so-called political enemies. Nixon may have despised the media, but never attacked them as “enemies of the people” or provoked threats and violence against journalists.

The point of this essay is not to glorify Richard Nixon, who deserves to be rated in the bottom half of our Presidents. Watergate was a serious scandal and left a deep gash on American democracy. I do not wish to “whitewash” history.

But when compared to the damage and the horrors perpetrated by Donald Trump in less than two years, and with Nixon’s shortcomings and scandals being revealed much later in his Presidency, there can be no dispute that Donald Trump is no Richard Nixon, and will never come anywhere near Nixon in reputation and accomplishments. Trump’s achievement is to make the worse presidents like Nixon, James Buchanan, Andrew Johnson, Franklin Pierce, Warren G. Harding, John Tyler, and George W. Bush look better. That’s shocking.