Did You Know? U.S. Presidents Have Secretly Recorded Conversations Since 1940

by Alexander B. Magoun

Forty years ago this month, Richard M. Nixon became the first (and only) U.S. president to resign his office. A prime reason for his unprecedented decision was the revelation of his White House recording system—which showed his effort to conceal a major abuse of executive power.

In an era of digital media and diminished expectations of privacy, that is less surprising than the poor quality of the recordings by Nixon and several of his predecessors, who recorded nearly 5,000 hours of presidential conversations beginning in 1940. There was no budget for them, and the need for secrecy prevented their installation or operation by audio engineers. Instead, the presidents or their staffs made the recordings. The results, which can frustrate listeners, still offer insights into U.S. presidents from World War II to the civil rights movement.

President Franklin D. Roosevelt was outraged with The New York Times in 1939 for publishing what he called “a deliberate lie.” Someone who attended a meeting of the U.S. Senate Committee on Military Affairs in the White House quoted Roosevelt as saying that the country’s frontier lay on the Rhine River in Europe.

After that incident, the president’s stenographer suggested that he start recording his meetings. Roosevelt experimented with the standard dictation device of the time, a hard-wax cylinder recorder designed by Dictaphone, but the test proved to be unsuccessful. It had less than 10 minutes of recording capacity, and its microphone was often ineffective.

David Sarnoff, president of the Radio Corporation of America, offered Roosevelt an alternative recording device that the company had licensed from inventor John Ripley Kiel, who recorded sound by indenting patterns on a disc or ribbon instead of on a cylinder. In 1938 Kiel filed a patent for a sound recording and reproducing system, which he demonstrated to RCA the next year. The intricate mechanical system wrapped 35-millimieter-wide acetate film—the recording medium—around tapered mandrels, and an electrical stylus would indent the film in response to sound waves. It was, in the inventor’s words, the only “device that could record for as long as 24 hours unattended” and “immediately have the recording played back.” It was installed in the White House basement directly under Roosevelt’s desk in the Oval Office. An RCA 88-A microphone, hidden in the president’s desk lamp, offered 180-degree sound pickup. Roosevelt pressed a button to activate the system, which then recorded only in response to sounds.

Roosevelt recorded 14 press conferences in 1940 during his toughest reelection campaign. The eight hours of recordings occupied about 37 meters of film on one reel. After he won reelection, he never used the sound recorder again. It remained in the White House until 1947, when the National Archives took possession of it and transferred the recordings to acetate discs.

President Dwight D. “Ike” Eisenhower began recorded meetings upon taking office in 1953. The White House Signal Detachment installed a Soundscriber Tycoon dictation system in the Oval Office early that year. A button in the president’s desk turned on a microphone hidden inside a fake telephone on the desk; the rest of the system’s components were housed in the adjacent office of his secretary, Ann C. Whitman. Seven-inch green vinyl discs revolved at 33 1/3 rpm under an indenting stylus, recording the sound waves for 15 minutes per side. However, Eisenhower often would forget to turn the machine on at the start of a meeting, and many of the conversations he did record turned out to be indecipherable.

By 1955 the White House had switched to another dated but durable format, the Dictaphone Time Master’s red vinyl Dictabelt. Like the Soundscriber, the system’s stylus indented a groove, but on a 30.5-centimeter loop of vinyl plastic that could record 15 minutes of sound. Eisenhower recorded about 75 meetings, including this one in 1956 with Jawaharlal Nehru, India’s prime minister and leader of the country’s independence movement.

President John F. Kennedy significantly increased the amount of recording in the White House. Like Roosevelt, Kennedy wanted to ensure that the people he spoke to in private said the same things in public.

His system, installed in 1962 by the White House Communications Agency (WHCA), used a Model 5 reel-to-reel magnetic tape recorder made by Tandberg Radiofabrikk, a Norwegian company. Obtained from the U.S. Army Signal Corps, it could record up to two hours on a reel with greater frequency response than the earlier indenting recorders, and with minimal distortion. Microphones were hidden behind the drapes in the Cabinet Room, under Kennedy’s desk, beneath a coffee table in the Oval Office, and in the White House study. Kennedy also had a Dictaphone machine connected to his telephone. In 1962 and 1963, the White House recorded 265 hours of meetings and 12 hours of phone calls. The microphones still picked up background noise, however, including the air conditioning hum, paper shuffling, and the tapping of Kennedy’s legs against his desk.

As Kennedy’s vice president, Lyndon B. Johnson recorded telephone conversations with a Dictaphone, an Edison Voicewriter, and IBM’s transistorized Executary, which used a magnetic tape belt designed by Peirce Dictation Systems. As president, Johnson relied on Dictaphones rather than tape recorders to save more than 800 hours covering 9,000 telephone conversations on five phone lines, including two at his ranch in Stonewall, Texas. Johnson was the first president to use his recordings; his secretaries transcribed them for his review each evening. In 1968 he also began recording Cabinet Room meetings. A WHCA carpenter drilled eight holes in the underside of the Cabinet table to feed microphone outputs to a mixer in the basement. Voices were still hard to hear among other noises in the room, however, and the head of the WHCA said he thought the system was “cheap and inadequate.” 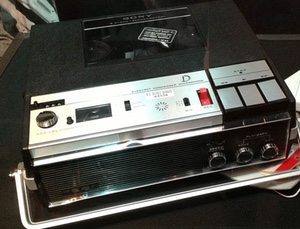 Johnson encouraged Nixon to use his system just before Nixon took office. He declined at first but also wanted to ensure the accuracy of statements by people who met with him, and keep a record for his memoirs. His chief of staff, H.R. Haldeman, considered Nixon to be “far too inept with machinery” to operate a recording system so the installation used modified, voice-activated Sony TC-800B reel-to-reel tape recorders. They were connected to the president’s electronic location system, a radio-frequency device Nixon carried that activated receivers in certain rooms he entered. The recorders used 0.0127mm-thick magnetic tape*, which moved past recording heads at 38 cm per second, maximizing a reel’s recording time to 6.5 hours. That speed degraded audio quality, however, and clipped the harmonics of speech.

The Secret Service installed seven of the recorders in the White House and set up others in the Executive Office Building; Camp David, a countryside retreat in Maryland; and on four presidential telephone lines. They recorded 3,700 hours of conversations between February 1971 and July 1973, until their existence was revealed during congressional hearings on the White House’s role in attempts to wiretap the Democratic National Committee’s offices in the Watergate complex, in Washington, D.C.

The presidents’ recording efforts had many consequences, most notably Nixon’s resignation. Although the recordings were made decades ago, they have been released gradually, partly because the presidents’ families retain rights to some of them. Most of the tapes and transcriptions are available to visitors at the National Archives and relevant presidential libraries. Anyone can listen to them online, via the Miller Center at the University of Virginia, in Charlottesville, and other sources.

Long after Nixon’s last recording, decades of historical conversations caught on tape are still being unpacked and digitized for more listeners than any of the presidents could have imagined.

Read entire article at The Institute
comments powered by Disqus