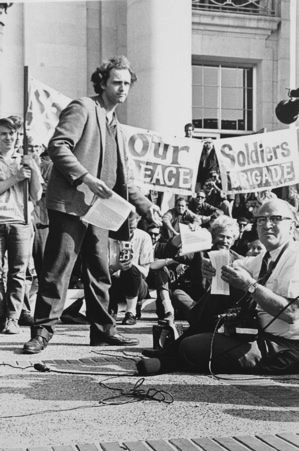 Anyone familiar with Berkeley’s Free Speech Movement of 1964 knows what a real free speech movement looks like. And the current Ann Coulter/College Republican free speech charade at Berkeley bears no resemblance to such a movement.

In the free speech controversy of 1964 the UC Berkeley administration closed down the traditional free speech area just outside the campus’s south entrance. This suppression generated mass protest by a wide spectrum of student groups from the Young Socialist alliance to Goldwater Republicans. It took months of negotiations, sit-ins, a semester full of non-violent demonstrations, the largest mass arrests in California history, and the most intensive organizing by thousands of students to win over the faculty to the Free Speech Movement’s central demand – affirmed in a landslide vote by the Berkeley Academic Senate – in its December 8, 1964 resolutions “that the content of speech or advocacy should not be restricted by the University.” In other words, the Berkeley administration, headed by Chancellor Edward W. Strong, had to be forced by a broad student movement and a majority of its voting faculty to open the campus to free speech and political advocacy.

The contrast between the Strong administration of 1964 and today’s UC Berkeley administration, headed by Chancellor Nicholas B. Dirks, could not be starker. When a small group of students back in 2014 demanded that UC disinvite comedian Bill Maher from speaking at its graduation ceremony on the grounds that Maher’s humor was Islamophobic, Dirks invoked Berkeley’s free speech tradition and insisted that Maher be allowed to speak – which he was. When earlier this semester student activists and an open letter from some 100 faculty urged him to ban the bigoted alt right speaker Milo Yiannopoulos, Dirks refused to do so, again standing up for free speech. It was only after an ugly riot and arson by non-student anarchists on the night of the Yiannopoulos talk (leaving more than $100,000 in property damage on the Berkeley campus) that the chancellor reluctantly canceled the talk in the interests of public safety.

Fearing a recurrence of the Yiannopoulos violence, the Berkeley administration sought to postpone Coulter’s speech, and in the end asked that in the interest of security it be delayed a week. The administration cited threats it had received against Coulter, which is not surprising given that she is an intemperate nativist. Coulter and her College Republican and Young American Foundation sponsors responded with claims that the administration was trying to stifle conservative speech and that it had caved in to Berkeley’s “rabid off-campus mob” in doing so.

There are very few students on the Berkeley campus who see this week’s delay of the Coulter speech on public safety grounds as a free speech violation. That’s why the lawsuit the College Republicans filed this week against the UC administration had no Berkeley student sponsors other than the College Republicans. Think of the contrast with 1964, when there was a genuine free speech violation and a mass free speech movement; it mobilized virtually every Berkeley student group from left to right and even created a new organization of students, the independents, so that those who had been unaffiliated with any political group could be a part of the Free Speech Movement. In 1964 thousands of Berkeley students marched and hundreds engaged in civil disobedience when free speech was genuinely under threat. Not so today.

No, this is not a real free speech movement at Berkeley today, and that is because there has been no free speech violation by the UC administration. What the Coulter affair really amounts to is a “time, place, and manner” quibble. The settlement of the 1964 Free Speech Movement, as embodied in the December 8 resolutions, included a provision authorizing the university to impose reasonable regulations on the “time, place, and manner of political activity” on campus so that such activity does not interfere with “the normal functions of the university.” The administration has used this “time place and manner” authority in the face of the threats it received, acting on the belief that the time and place for the Coulter talk that would not end in violence and disrupt the normal functions of the university was in early May at a more secure location.

Whether out of a desire for free publicity, concern about her $20,00 speakers fee, or a desire to bash UC’s liberal administration and the Berkeley left, Coulter presented herself as a free speech martyr, and in this she has been joined by her College Republican sponsors. But there has never been a mass “time, place, and manner” movement at Berkeley. And judging by the collective yawn with which the campus has reacted to Coulter’s posturing and the College Republicans' lawsuit, there is not about to be one.