If You Want a Future with Fewer Floods, Fires, and Other Environmental Disasters, Vote Democratic 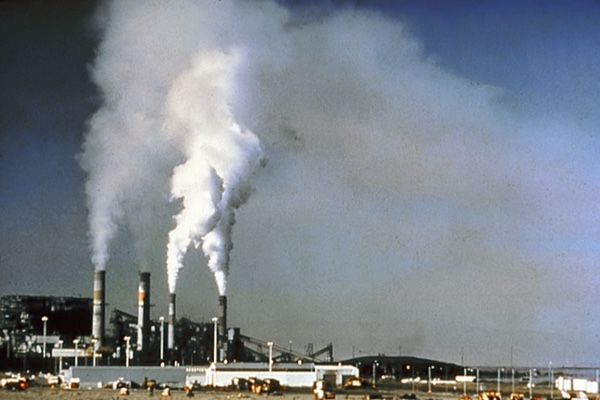 I had a conversation with a friend the other day who seemed on the fence about whom to vote for in November, Trump or Clinton. To his mind, both were deeply flawed candidates. While recognizing the many failings of Hilary Clinton (being too hawkish, for example), I raced through my mind to identify a few clinching reasons why she was still the better alternative. Two of them immediately jumped out—nuclear weapons and the environment. These issues, if handled carelessly, present the greatest future dangers to us, our children, and grandchildren. Whose finger would you rather have on the nuclear button? Whose policies would be most likely to help us avoid the environmental nightmare that accelerated global warming will undoubtedly bring? Can anyone seriously argue that that candidate would be Trump?

Since various sites have already dealt with the issue of “Trump’s Finger on the Nuclear Button” (see, e.g., here), I’ll concentrate on the global warming and climate issue.

Even before Trump emerged as the Republican Party’s candidate for the 2016 election, that party shamed itself by its hostility to global-warming evidence. During one of the debates for the 2000 elections, George W. Bush said, “I don't think we know the solution to global warming yet. And I don't think we've got all the facts before we make decisions.” He later added, “some of the scientists, I believe. . . haven't they been changing their opinion a little bit on global warming?” His opponent, Al Gore responded, “I disagree that we don't know the cause of global warming. I think that we do. . . . Look, the world's temperature is going up, weather patterns are changing, storms are getting more violent and unpredictable. What are we going to tell our children? I'm a grandfather now. I want to be able to tell my grandson when I'm in my later years that I didn't turn away from the evidence that showed that we were doing some serious harm.”

Bush’s contention that scientists disagree on global warming has been a long-standing tactic of Republicans. In an essay of 2009 I pointed out that at that time the Academies of Science of the world’s major countries, plus 84 percent of U.S. scientists, agreed that global warming was getting warmer because of human activity.

My essay also identified some prominent Republicans and their conservative supporters who were global warming deniers. Most significantly it mentioned Senator James Inhofe of Oklahoma, the senior Republican on the Senate Committee on Environment and Public Works. In July 2003 he declared on the Senate floor that global warming alarmism was the "greatest hoax ever perpetrated on the American people."

Another conservative who used such language was talk-show host Rush Limbaugh. In his book See, I Told You So (1993), he stated that “despite the hysterics of a few pseudo-scientists, there is no reason to believe in global warming.” In an August 15, 2005 broadcast he declared that global warming was “one of the biggest hoaxes being perpetrated on the people of the world” and that “environmentalists still cannot prove that this [global warming] is man-made.” George Will, a long-time supporter of conservative Republicans, who recently left the Republican Party because of his distaste for Trump, also consistently downplayed any global-warming threat.

In a later 2015 essay, “Senator Inhofe and the Global Warming Deniers,” I indicated that the Oklahoma senator had just become chairman of the Senate committee overseeing the U.S. response to global warming and climate change and that he had authored the 2012 book The Greatest Hoax: How the Global Warming Conspiracy Threatens Your Future. My essay also noted that “according to a 2013 Conspiracy Theory Poll conducted by a respected polling agency, ‘Republicans say global warming is a hoax by a 58-25 margin, Democrats disagree 11-77, and . . . . 61% of Romney voters believe global warming is a hoax.’ In May 2014, politifact.com checked out California Governor Brown’s claim that few Republicans in Congress accept human-caused climate change, and could find only 8 out of 278 who admitted that it existed.”

The second essay did not mention, however, that in 2011 the Republican-controlled House of Representatives put an end to the House Select Committee on Energy Independence and Global Warming, which a Democratic-controlled House had established in 2007. Since 2011, the Republican-dominated House has relegated the global-warming danger primarily to the Science, Space, and Technology Committee, whose dominating Republican members have squashed Democratic attempts to slow down global warming.

The Washington Post has labelled the committee’s present chairperson, Rep. Lamar Smith (Texas, Rep.), “one of Congress’s most prominent global warming skeptics,” and one who “has railed against environmentalists and the media for buying into the ‘climate-change religion.’” In the first nine months of 2015 alone, he “presided over at least a half-dozen hearings attacking climate science or the Environmental Protection Agency.”

In my 2009 essay on Global Warming skeptics I cited overwhelming evidence of global warming and quoted the following words from Obama when he was still president-elect in late 2008: “Few challenges facing America--and the world--are more urgent than combating climate change. The science is beyond dispute and the facts are clear. Sea levels are rising. Coastlines are shrinking. We’ve seen record drought, spreading famine, and storms that are growing stronger with each passing hurricane season.”

Since George W. Bush cast doubt on global warming evidence in one of the debates of 2000, a NASA site indicates that “the 10 warmest years in the 134-year record all have occurred since 2000, with the exception of 1998. The year 2015 ranks as the warmest on record.” And 2016 is shaping up to continue that trend. Each month from May 2015 to July 2016 was the earth’s hottest on record. And natural disasters like western wildfires, melting ice caps, and the recent Louisiana flooding, all made more likely by global warming, are increasing in intensity.

It is especially sad that so many individuals who suffered in Louisiana—the Washington Post reported that at least 60,000 homes were damaged or destroyed—intend to support Trump in November. Like many poor and average-income people in Kansas, whom Thomas Frank reported on in What's the Matter with Kansas?: How Conservatives Won the Heart of America (2004), they fail to see how a Republican agenda, this time regarding the environment, is contrary to their own long-term interests.

Yet, Republicans continue to obstruct all serious efforts to slow down warming. In the fall of 2015, shortly before the visit to the United States of Pope Francis (who wrote an encyclical urging action on global warming), only 11 of 247 House Republicans were willing to sign a resolution acknowledging the scientific evidence for global warming and the threat it posed for us all.

During the Republican primary season of 2015-16, some of the party’s presidential candidates, like John Kasich, at least acknowledged that global warming was a problem. Donald Trump, however, was among the candidates’ biggest deniers. Like Republican Senator Inhofe, he has often referred to global warming and climate change as a “hoax.” He promises to “cancel the Paris Climate Agreement [of December 2015] and stop all payments of U.S. tax dollars to U.N. global warming programs.” According to a Washington Post editorial, his announced plans would deliver “a massive blow to the global fight against climate change.”

As one source observes, there is some evidence that “Trump May Be Making Republicans Increasingly Doubt Global Warming.” The article notes that a University of Michigan study found that the number of surveyed Republicans who doubted global warming had doubled in the year following the spring of 2015.

Although Hilary Clinton’s stance on global warming has not been as forceful as that of Bernie Sander’s, it has at least acknowledged that “climate change is an urgent threat and a defining challenge of our time.”

A recent New York Times piece noted that President Obama “enacted rules to cut planet-heating emissions across much of the United States economy,” and that he “was a central broker of the Paris climate agreement, the first accord committing nearly every country to reducing greenhouse gas emissions.” The article also cited Obama as saying that climate change “is the greatest long-term threat facing the world, as well as a danger already manifesting itself as droughts, storms, heat waves and flooding” and that “he believes that his efforts to slow the warming of the planet will be the most consequential legacy of his presidency.”

Clinton embraces Obama’s legacy and her election would offer hope that she would continue his efforts. Electing her would also make it more likely that Democrats could regain control of the Senate and House of Representatives and replace Republican global-warming-sceptic committee heads like Inhofe and Smith. Finally, it would ensure that new Supreme Court appointments for at least the next four years would be more willing to rule favorably on cases dealing with government attempts to slow global warming.

Conversely, a Trump presidency would almost surely guarantee that we continue on a path to environmental suicide.

But how do we convince potential Trump voters that by voting for him they are imperiling their own futures and that of their children and grandchildren? Rick Shenkman, HNN editor and author of  Political Animals:  How Our Stone-Age Brain Gets in the Way of Smart Politics  indicates “that human beings most readily change their views when they grow anxious,” and that we should be “pointing out over and over again where Trump’s views depart from reality.”

Perhaps the steady increase in disasters like the Louisiana flooding and California wildfires will ramp up anxieties, especially if we can demonstrate, as experts maintain, that global warming makes them more likely. Shenkman believes that “voters will be reluctant to go against experts if they hear time and again that they believe Trump’s policies won’t work.”

A good first step for all of us would be to sign the petition that a number of environmental and civic groups are sending to the moderators of the upcoming presidential debates. It begins, “As the moderators of the 2016 presidential debates, you have the opportunity to ask questions about the most pressing issues facing our country—and climate change must be at the top of the list.” The petition then points out that the major news networks have heretofore addressed few climate questions to prospective presidential candidates. It concludes that “millions of voters will get their information about the presidential candidates from the debates. They entrust you with the responsibility to ensure that they know where the candidates stand on an issue that will affect their health, the economy, our national security—and their children's and grandchildren's futures.”

Moderators Lester Holt (NBC), Martha Raddatz (ABC News), Anderson Cooper (CNN), and Chris Wallace (Fox News) would indeed provide a great public service if they stressed the importance of global warming by asking both Trump and Clinton to explain their views on it and climate change. Then, just as importantly, the moderators should ask both candidates to explain why any of their views diverge from expert scientific opinions.

Facing such questioning, it is difficult to see how Donald Trump could fare well. It is more likely that he would increase voters’ anxiety about voting for him or any fellow Republican deniers. If the 2016 election turns out to be as close as the 2000 one that brought global-warming-doubter George W. Bush to power instead of global-warming-truth-teller Al Gore, even a small ramping up of voter anxiety over Trump’s climate stance could prove decisive.