The Radical and Deep Insights of Pope Francis’s Environmental Encyclical 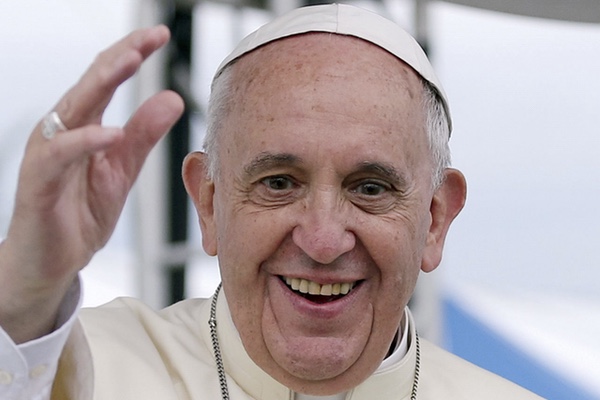 Pope Francis’s recent Encyclical has been referred to as his “encyclical on climate change.” It is that—and also a strong rebuttal to deniers of human-caused global warming. But it is also much more than that. Its 246 numbered points (some of which are indicated in parenthesis below) address not only climate change, but pollution, declining biodiversity, and a whole host of other environmental problems. Moreover, they put forth a comprehensive environmental philosophy that is indebted to centuries of Catholic thinking, including that of the pope’s favorite saint, St. Francis of Assisi.

Pope Francis’s environmental values compare to those of various poets such as William Blake, William Wordsworth, Gerrard Manley Hopkins, and environmental thinkers like John Muir, E. F. Schumacher, and Wendell Berry. Moreover, he demonstrates a thorough knowledge of scientific climate findings and includes a sweeping condemnation of our modern consumer culture propelled by corporate profit-driven technologies. Near the end of this essay, we shall briefly consider reactions to Francis’s encyclical, but first a summary of his main points and the similarity of them to those of earlier environmentalists.

The pope states: “Human ecology is inseparable from the notion of the common good, a central and unifying principle of social ethics. The common good is ‘the sum of those conditions of social life which allow social groups and their individual members relatively thorough and ready access to their own fulfilment.’ ” (156) His statement is in keeping with the thinking of St. Thomas Aquinas and his twentieth-century French Catholic follower Jacques Maritain, who wrote that “the end of politics is the common good.” Francis repeatedly stresses that this should be the goal of our policies and politics, environmental and otherwise.

His holistic approach is especially concerned with the relationship between environmental degradation and the lives of poor people: “The same mindset which stands in the way of making radical decisions to reverse the trend of global warming also stands in the way of achieving the goal of eliminating poverty. A more responsible overall approach is needed to deal with both problems: the reduction of pollution and the development of poorer countries and regions.” (175) He also sees a connection between environmentalism and peace, “which is much more than the absence of war. Inner peace is closely related to care for ecology and for the common good.” (225)

Pope Francis directly challenges our modern “throwaway culture,” one of “compulsive consumerism,” where the “market tends to promote extreme consumerism in an effort to sell its products, [and] people . . . easily get caught up in a whirlwind of needless buying and spending.” (203) He believes such a culture “engenders a feeling of instability and uncertainty, which in turn becomes ‘a seedbed for collective selfishness.’ When people become self-centred and self-enclosed, their greed increases. The emptier a person’s heart is, the more he or she needs things to buy, own and consume.” (204) “A world of exacerbated consumption is at the same time a world which mistreats life in all its forms.” (230)

Instead, Francis insists, if we are to effectively deal with global warming and create a sustainable future, “there needs to be a distinctive way of looking at things, a way of thinking, policies, an educational programme, a [new] lifestyle and a spirituality which together generate resistance to the assault of the technocratic paradigm.” (111) There is, he says, an “urgent need for us to move forward in a bold cultural revolution,” (114) one that would “enable the development of new convictions, attitudes and forms of life.” (202)

But the “new convictions” and habits he calls for would be based on a creative and imaginative application of old values, only applied to the present state of our planet. These values are ones that many of the great religions having been teaching for centuries, like love of our fellow human beings. Francis advocates a “spirituality [that] can motivate us to a more passionate concern for the protection of our world.” (216) And one that is “marked by moderation and the capacity to be happy with little. It is a return to that simplicity which allows us to stop and appreciate the small things, to be grateful for the opportunities which life affords us, to be spiritually detached from what we possess.” (222)

In a section on “Civic and Political Love” he writes, “Love, overflowing with small gestures of mutual care, is also civic and political, and it makes itself felt in every action that seeks to build a better world. Love for society and commitment to the common good are outstanding expressions of a charity.” (231) The “sense of deep communion with the rest of nature” that he calls for “cannot be real if our hearts lack tenderness, compassion and concern for our fellow human beings.” (91) “Only by cultivating sound virtues will people be able to make a selfless ecological commitment.” (211) He realizes, however, in more affluent countries, amidst “a milieu of extreme consumerism . . . it [is] difficult to develop other habits,” and that “we are faced with an educational challenge.”(209)

In urging us to live simple and wise lives, Francis is almost poetic at times. Like Romantic poets such as Wordsworth, he often mentions the importance of nature and beauty. “If someone has not learned to stop and admire something beautiful, we should not be surprised if he or she treats everything as an object to be used and abused without scruple.” (215) In one of two prayers that end the encyclical, he asks God to help us “sow beauty, not pollution and destruction.” (246) His love of beauty also recalls that of his fellow Jesuit, the nineteenth century poet Hopkins, who in such poems as “God’s Grandeur” and “Pied Beauty” found beauty all around him. As Francis writes, “there is a mystical meaning to be found in a leaf, in a mountain trail, in a dewdrop, in a poor person’s face.”(233)

Although affirming the contributions that religions, including the Catholic Church he heads, can make to the educational task before us, Francis’s encyclical contains little of the dogmatism that characterized some earlier encyclicals like the 1864 Syllabus of Errors. Early on he says, “In this Encyclical, I would like to enter into dialogue with all people about our common home,” (3) and uses the word “dialogue” two dozen more times.

Furthermore, he admits his church and Christians in general have sometimes erred. “If a mistaken understanding of our own principles has at times led us to justify mistreating nature, to exercise tyranny over creation, to engage in war, injustice and acts of violence, we believers should acknowledge that by so doing we were not faithful to the treasures of wisdom which we have been called to protect and preserve.” (200) “It must be said that some committed and prayerful Christians . . . tend to ridicule expressions of concern for the environment. Others are passive; they choose not to change their habits and thus become inconsistent. So what they all need is an ‘ecological conversion.’” (217)

Francis’s encyclical reminds one of the writings of earlier environmentalists. National-Parks- advocate John Muir wrote that “everybody needs beauty” and criticized various people for “trying to make everything dollarable.” In 1973 E. F. Schumacher stated that advertising and marketing encouraged a “frenzy of greed and . . . an orgy of envy and that “the cultivation and expansion of needs is the antithesis of wisdom.” He believed that the struggle to insure adequate future resources and control pollution could not be successful unless “patterns of production and consumption” changed. In 2008 Wendell Berry, an admirer of Schumacher’s works, wrote that “the real names of global warming are Waste and Greed.” (See here for Berry and Schumacher citations.)

The writings of the moderate British Christian (a convert to Catholicism in 1971) socialist and economist Schumacher and the land-loving Kentucky writer and traditionalist Berry have much more in common with the pope’s encyclical. They share its emphasis on the wisdom of traditional religions; on values like love, compassion, and empathy; on the error of equating technological advancements and the production of ever-new products with overall human progress; and on the disastrous effects of our modern consumer culture on the environment.

It is little wonder that so many conservatives and U.S. Republicans are distressed by Francis’s encyclical. Not only are Republicans far more likely than Democrats to believe that talk of global warming is a hoax, but they are also more inclined to place their faith in what Francis calls “the invisible forces of the market to regulate the economy.” (123) But he believes that “the environment is one of those goods that cannot be adequately safeguarded or promoted by market forces.” (190) Columnist David Brooks, for example, bemoans the fact that Francis rejects “market-based mechanisms to solve environmental problems.”

Rather than sharing the conservative fear of “big government,” Francis emphasizes such approaches as developing better laws which would lay “down rules for admissible conduct in the light of the common good.” (177) But he realizes that politicians are susceptible to lobbyists and big-money interests and therefore “society, through non-governmental organizations and intermediate groups, must put pressure on governments to develop more rigorous regulations, procedures and controls.” (179)

Liberals and progressives have greeted the encyclical more favorably. Katrina vanden Heuvel , the editor of the liberal magazine, the Nation, has praised the encyclical and noted the Republican and conservative criticism of it. An article on the LA Progressive website comments favorably on the pope’s insights and faults columnist David Brooks for failing to appreciate the extent to which capitalism has contributed to our environmental woes. A 2014 essay on the same site called for a new progressive culture similar to the one the pope hopes will emerge from “a bold cultural revolution.”

There have been a few liberal publications that have been more critical. In England, the Guardian, which describes itself as “the world's leading liberal voice,” has run several pieces (here and here) criticizing the encyclical for slighting the role population growth has played in increasing global warming and other environmental problems. Given the long-standing Catholic opposition to contraception, the criticism is just. From a liberal, progressive viewpoint, Francis should have said more than just criticizing those who “blame population growth instead of extreme and selective consumerism” for our environmental crisis. (50)

But, as the radical pacifist Catholic Dorothy Day wrote in 1954: “We must always be seeking concordances, rather than differences—that is the basis of the ecumenical movement, which is part of the peace movement.” Liberals, progressives, and all people who care about the earth and future generations should rejoice as environmentalist Bill McKibben does when he writes about the encyclical: “This marks the first time that a person of great authority in our global culture has fully recognized the scale and depth of our crisis, and the consequent necessary rethinking of what it means to be human.”