Women Who Advanced Science and Changed History: An Interview with Rachel Swaby

Robin Lindley is a Seattle-based writer and attorney, and the features editor of the History News Network (hnn.us). His articles also have appeared in Crosscut, Real Change, Documentary, Writer’s Chronicle, and others. He has a special interest in the history of medicine. His email: robinlindley@gmail.com.

"By treating women in science like scientists instead of anomalies. . .

we can accelerate the growth of a new generation of chemists, archeologists

and cardiologists while also revealing a hidden history of the world."

Women of science are responsible for some of the most significant discoveries in history, often despite sexism and marginalization in male-dominated disciplines. Many of these strong-willed women faced discouragement and blatant discrimination that excluded them from educational opportunities, academic positions, living-wage jobs, and professional acknowledgement.

Some of these women were ignored or mocked. Trailblazing physician Mary Putnam Jacobi was admitted to France’s École de Médecine in the 1860s on the condition that she “maintain a buffer of empty seats around her at all times.” Male colleagues stole the research of geneticist Rosalind Franklin on DNA structure. And the successes of female scientists were often either attributed to male colleagues or completely dismissed.

But these female explorers and creators persisted despite innumerable obstacles. With a few exceptions such as chemist Madame Curie, astronaut and astrophysicist Sally Ride, and iconic nurse Florence Nightingale, most of these brilliant scientists are not household names despite their important contributions, including women like physician Helen Taussig, a pioneer of pediatric cardiology; astronomer Maria Mitchell, first American discoverer of a comet; American chemist Stephanie Kwolek, inventor of Kevlar; German mathematician Emma Noether, a founder of abstract algebra; and British paleontologist Mary Anning, early discoverer of a Plesiosaur and a pterodactyl. 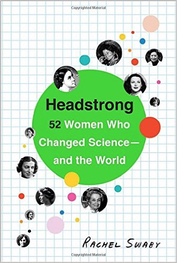 Author Rachel Swaby provides a timely corrective to the record with accounts of these women and many more. In her inspiring and illuminating new book Headstrong: 52 Women Who Change Science—and the World (Broadway Books), she introduces some of the great and often underappreciated or forgotten minds of science.

Ms. Swaby’s Headstrong includes succinct profiles of 52 female scientists and their unique contributions in fields from medicine, biology and genetics to chemistry, physics and astronomy—and beyond. The book serves as a valuable reference for young readers and offers inspiration, particularly for girls and women interested in careers in science and technology. The bookalso provides a springboard for further research on these women scientists and their prominent research and innovations.

Rachel Swaby is a freelance journalist whose work has appeared in Runner’s World, Wired, O, The Oprah Magazine, New Yorker.com, Afar, and others.

Ms. Swaby graciously responded to questions by email on her book and some of the scientists she profiled.

Robin Lindley: How did you come to write about the women scientists in Headstrong? Did your new book grow out of your previous writing or research or personal experience?

Rachel Swaby: In 2013, the New York Times ran an obituary for Yvonne Brill. Brill was a rocket scientist. She won the National Medal of Technology and Innovation in 2011 and designed a propulsion system that keeps satellites in orbit. And yet, the first paragraph of her obituary in the Times went like this: “She made a mean beef stroganoff, followed her husband from job to job and took eight years off from work to raise three children. 'The world’s best mom,' her son Matthew said.” Only in the second paragraph did the obit note that she “was also a brilliant rocket scientist.” Needless to say, I was pretty disappointed about how she was treated, as were many others. The article was later amended. But for me, the lasting impact was that we needed better profiles of women in science—and more of them.

Robin Lindley: You focus on the accomplishments of women scientists. Do you have a background in science?

Rachel Swaby: I don't! I loved science as a kid and then decided in high school that I wasn't good at it. I went on to get an English major. My first magazine job was at Wired. Wired publishes so many fascinating science stories. They quickly became my favorite stories to read and write.

Robin Lindley: Did you write this book to encourage more girls and women to study science and technology?

Rachel Swaby: I would love if that were the outcome. But my initial goal was a bit more broad. I wanted the great work of these scientists to be recognized. I hope that one day we can speak as easily about Chien-Shiung Wu and her work disproving a law of physics as we can about the man who made it.

If we all talk about women’s contributions to STEM (science, technology, engineering and mathematics) fields more regularly, we’ll help the next generation of women interested in STEM fields see that there’s a place for them. So yes, I hope it’s a source of inspiration, but I also hope, for all our sakes, that we’re able to talk about the incredible scientific accomplishments of women as easily as we’re able to name the accomplishments of men.

Robin Lindley: How did you choose the 52 women you include in your book?

Rachel Swaby: There are just so so many scientists worth profiling! All the scientists needed to meet three conditions: 1) They had to be dead. 2) They had to have made a concrete discovery or breakthrough. 3) There had to be enough information available so that I could tell a story about their lives and work. I didn’t want to go over the bullet points of a biography; I needed more. I certainly wasn’t able to write about all the scientists who met these criteria. And I missed others whose stories were not as well documented.

Robin Lindley: You decided not to profile iconic scientist Marie Curie but you note that she inspired others. Are there one or two stories you enjoyed about how Curie or other women inspired younger scientists?

Rachel Swaby: Gertrude Belle Elion looked up to Marie Curie. Ellen Swallow Richards was inspired by her astronomy teacher Maria Mitchell. Chien-Shiung Wu greatly admired Lise Meitner. I saw this over and over.

Many great scientists were inspired by other women who worked before them. Yvonne Brill dedicated years of her life to helping other women engineers gain recognition. Amelia Earhart’s extraordinary flight inspired Brill to follow her own dreams.

Robin Lindley: You include several celebrated women who may not be widely known for their contributions to science. For example, actress Hedy Lamarr’s story may surprise some. What did she do?

Rachel Swaby: She designed a frequency-hopping communication system that was supposed to make it easier to guide torpedoes. Although the technology wasn’t adopted during WWII, as she initially intended it to be, the idea was later wrapped into technologies like Wi-Fi and BlueTooth.

Robin Lindley: You also include renowned nurse Florence Nightingale, but not in the medicine category. How do you see her contributions?

Rachel Swaby: She certainly made a huge and important impact on nursing and medicine. No doubt about that. But the way she used data, statistics, and infographics was also so important for public health and what we now call evidence-based medicine. I wanted to make the point that these fields are connected. You can be a mathematician and make a really big impact on medicine and health.

Robin Lindley: I have a special interest in the history of medicine, and especially neuroscience. Can you describe how Italian neuroembryologist Rita Levi-Montalcini experimented and made important discoveries despite war and other obstacles she faced?

Rachel Swaby: She worked with what was available to her in extremely difficult circumstances. She went into hiding during WWII because she was Jewish and Italian. So she set up a secret bedroom lab. Her brother built her an incubator and she made a scalpel with a filed down knitting needle. She carried out her experiments on fertilized chicken eggs donated by a neighbor. She published her work in Swiss and Belgian journals that reached America.

After the war, a fellow researcher based in the US reached out. What was supposed to be a trip lasting a few months turned into a 26-year tenure at Washington University in St. Louis, where she carried out her Nobel Prize-winning work on nerve-growth factor.

Robin Lindley: I was surprised about the work of African American scientist Alice Ball (1892-1916) who discovered a treatment for leprosy, and died very young. How did she overcome gender and racial discrimination in a country where women weren’t yet allowed to vote and racism was rampant?

Rachel Swaby: Sadly, I don’t know. This is a good example of how the people we hold up as examples are the ones best documented. My research budget prohibited me from visiting Universities and digging through paper archives. I relied on the digital archives and what was available on Google Books and in my local libraries. No doubt, I missed many other important scientists because information about their lives and discoveries weren’t well documented.

Robin Lindley: All of the women you include in Headstrong are now deceased, with several deaths in the past few years. Would you like to now do a study of exemplary living scientists?

Rachel Swaby: I would love to! There’s so much exciting work going on right now. Alas, no plans presently, but that could always change.

Robin Lindley: What projects are your working on now?

Rachel Swaby: There will be a middle-grade version of Headstrong out next year, called Trailblazers.

Robin Lindley: Do you have anything to add about your hopes for the books or the responses from readers since the book appeared?

Rachel Swaby: There seem to be a lot of people really excited about learning about these amazing scientists. It's thrilling. I mean, the more people talking about Rita Levi-Montalcini or Chien-Shiung Wu, the better. The response makes me really hopeful for the future of women in STEM.