Capturing History as it Really Happened in October 1962 (Part 4) 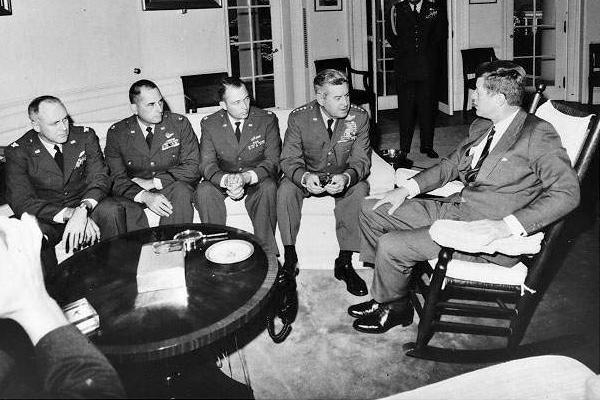 President Kennedy meets in the Oval Office with General Curtis LeMay and reconnaissance pilots who flew the Cuban missions. Third from the left is Major Richard Heyser who took the photos on which the Cuban missiles were first identified. Wikipedia

October 19, 1962:  The president met with the Joint Chiefs to reveal, not to consult about, his decision to begin with a naval blockade around Cuba rather than bombing and/or invasion. If the U.S. attacked the island, he explained patiently, it would give the Soviets “a clear line to take Berlin.” The U.S. would then be regarded by the NATO allies, since “they think we’ve got this fixation about Cuba anyway,” as “the Americans who lost Berlin. . . . [because] we didn’t have the guts to endure a situation in Cuba. After all, Cuba is five or six thousand miles from them. They don’t give a damn about Cuba. But they do care about Berlin and about their own security. . . . I must say, I think it’s a very satisfactory position from their point of view.” A quick air strike might neutralize the missiles, but if the Soviets take Berlin in response, that “leaves me only one alternative, which is to fire nuclear weapons—which is a hell of an alternative.”

General Curtis LeMay, the air force chief of staff, countered forcefully that the United States doesn’t have “any choice except direct military action.” LeMay turned Kennedy’s Berlin argument on its head: “I don’t share your view that if we knock off Cuba they’re gonna knock off Berlin.” On the contrary, the Soviets “are gonna push on Berlin and push real hard” only if the U.S. failed to take military action in Cuba, since they would then feel “they’ve got us on the run.” A skeptical JFK interrupted to ask, “What do you think their reprisal would be” if the U.S. attacked Cuba?” There would be no reprisal, LeMay asserted without missing a beat, as long as you tell Khrushchev again, “If they make a move [in Berlin], we’re gonna fight. . . . So, I see no other solution. This blockade and political action I see leading into war. I don’t see any other solution for it. It will lead right into war. This is almost as bad as the appeasement at Munich. . . . I just don’t see any other solution except direct military intervention, right now.”

The general had gone well beyond disagreeing with the commander in chief. He had taken their generation’s ultimate metaphor for shortsightedness and cowardice, the 1938 appeasement of Hitler at Munich, and flung it in the president’s face. And everyone at the table knew that JFK’s father, Joseph P. Kennedy, had been a supporter of Neville Chamberlain’s policy of appeasement when he served as ambassador to England between 1938 and 1940. President Kennedy did not respond.

After several seconds of awkward silence the discussion resumed. Admiral George Anderson, chief of naval operations, asserted: “I agree with General LeMay that this will escalate and then we will be required to take other military action at greater disadvantage to the United States, to our military forces, and probably would suffer far greater casualties within the United States if these fanatics do indeed intend to fire any missiles. I do not see that as long as the Soviet Union is supporting Cuba, that there is any solution to the Cuban problem except a military solution.” He acknowledged the danger to Berlin but insisted that only a strong U.S. response would deter the Soviets from aggression against that divided city.

General Earle Wheeler, army chief of staff, increased the pressure by endorsing surprise bombing, a blockade, plus an invasion. He warned that because the Soviets had only limited numbers of ICBMs targeted at the U.S., “this short-range missile force gives them a sort of a quantum jump in their capability to inflict damage on the United States. And so as I say, from the military point of view, I feel that the lowest-risk course of action is the full gamut of military action by us. That’s it.”

Finally, the Marine Corps commandant, General David Shoup, warned the president that Khrushchev might have deployed missiles so close to America so that Cuba could inflict damage on the U.S. while the Soviets “keep out of it.” The longer the U.S. waited to eliminate this threat on its doorstep, he claimed, the greater the forces that would be required to do it. Despite dismissing Cuba as “that little pip-squeak of a place,” Shoup argued that these missiles “can damage us increasingly every day.” To head off these contingencies, Shoup urged, “you’ll have to invade the place,” banging the table for emphasis, “and if that decision is made, we must go in with plenty of insurance of a decisive success and as quick as possible.”

As to the “political factor,” LeMay interjected, “that’s not quite in our field . . . but you invited us to comment on this. . . . I think that a blockade and political talk would be considered by a lot of our friends and neutrals as bein’ a pretty weak response to this. And I’m sure a lot of our own citizens would feel that way too. In other words, you’re in a pretty bad fix at the present time,” the general declared, almost taunting the president. “What’d you say?” Kennedy asked matter-of-factly. “I say, you’re in a pretty bad fix,” LeMay repeated smugly. “You’re in with me,” Kennedy replied, with a derisive chuckle, “personally.”

General Maxwell Taylor, JCS chair, insisted that the Soviet base in Cuba was rapidly becoming more threatening than anyone had believed even earlier in the week. But the president again insisted that the Cuban missiles did not substantially alter the Soviet nuclear threat. He acknowledged that Soviet ICBMs might not be completely reliable, but they still had enough fire power to strike American cities, with or without Cuba, resulting in 80 to 100 million casualties: “you’re talkin’ about the destruction of a country! . . . The logical argument,” the president persisted, “is that we don’t really have to invade Cuba. That’s just one of the difficulties that we live with in life, like you live with the Soviet Union and China.”The president grimly acknowledged that “the existence of these missiles adds to the danger, but doesn’t create it. . . . I mean, hell, they can kill, especially if they concentrate on the cities, and they’ve pretty well got us there anyway.” “I appreciate your views,” the president finally told the JCS, “as I said, I’m sure we all understand how rather unsatisfactory our alternatives are.” But he repeated that the potential advantage of the blockade “is to avoid, if we can, nuclear war by escalation or imbalance. . . . We’ve got to have some degree of control.” JFK and Taylor soon left the meeting.

LeMay, Shoup, and Wheeler remained behind to talk as the door closed. The hidden tape recorder, of course, continued to turn. Shoup lauded LeMay for challenging the president: “You pulled the rug right out from under him.” “Jesus Christ!” LeMay responded disingenuously, “What the hell do you mean?” Shoup explained that he supported his air force colleague “a hundred percent” and mocked President Kennedy: “he’s finally getting around to the word ‘escalation.’ . . . When he says ‘escalation,’ that’s it. If somebody could keep ’em from doing the goddamn thing piecemeal, that’s our problem. You go in there and friggin’ around with the missiles. You’re screwed. You go in and friggin’ around with little else. You’re screwed.” “That’s right,” LeMay exclaimed. “You’re screwed, screwed, screwed,” Shoup fulminated; “He could say, ‘either do the son of a bitch and do it right, and quit friggin’ around.’ . . . You got to go in and take out the goddam thing that’s gonna stop you from doin’ your job.” The discussion soon trailed off, and the tape ran out just as the JCS officers left the Cabinet Room.