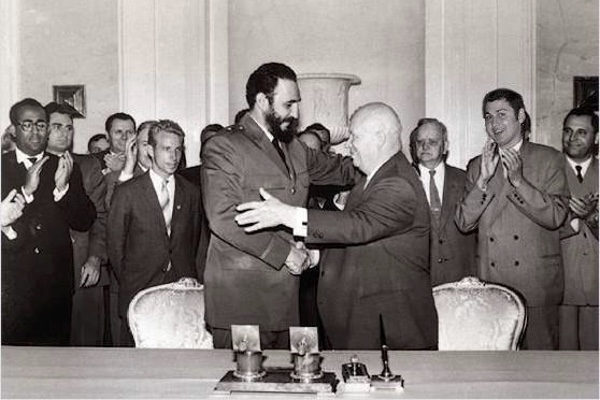 The discussion focused initially on whether the Soviet Union should be warned in advance if the president decided to bomb the missile sites in Cuba before they became operational. President Kennedy predicted grimly that, with or without a warning, Khrushchev’s likely response would be to “grab Berlin” after the missile sites were attacked; and, as a result, the NATO allies would then feel that the U.S. had “lost Berlin because of these missiles [in Cuba], which as I say, do not bother them” since they have already learned to live for years under the threat of nearby Soviet nuclear missiles.

“What do we do when . . . he moves into Berlin?” Robert Kennedy asked.

“If we could trade off Berlin and not have it our fault,” McGeorge Bundy quipped, but he was the only one to laugh.

“Well, when we’re talking about taking Berlin,” Robert McNamara asked, “what do we mean exactly? Do they take it with Soviet troops?”

“That’s what I would see, anyway,” JFK responded.

“I think there’s a real possibility of that,” McNamara agreed. “We have U.S. troops there. What do they do?”

“And they get overrun,” JFK predicted, since the Soviets had significantly more ground forces available in Berlin and East Germany.

“Then what do we do?” RFK queried.

“Go to general war,” Taylor pronounced, “assuming we have time for it.”

“Guess you have to,” Taylor concluded bluntly.

Bundy warned that the deterioration of the NATO alliance would be “very rapid” if the U.S. failed to respond decisively to any Soviet military move in Berlin.

But “the question really is,” President Kennedy declared, “what action we take which lessens the chances of a nuclear exchange, which obviously is the final failure. … And, at the same time maintain some degree of solidarity with our allies.” (That JFK thought of a nuclear holocaust as “final” is hardly surprising. But, the final failure would be his failure, a fact that clearly weighed heavily on his mind.)

“Now, to get a blockade on Cuba,” the president asked, “would we have to declare war on Cuba?” A cacophony of responses erupted with every voice in the room firmly in favor of a declaration of war for political, military, strategic, and/or diplomatic reasons.

But JFK countered forcefully, “I think we shouldn’t assume we have to declare war. … Because it seems to me if you’re gonna do that … it doesn't make any sense not to invade. We do the message to Khrushchev” and if work on the missile sites nonetheless continues “then we go in and take them out. We don’t declare war.”

“Your whole posture,” Bundy lectured the president, must reflect the fact that Khrushchev has done “unacceptable things from the point of view of the security of the hemisphere.” He confidently predicted that with or without a declaration of war, “You will, in fact, get into the invasion before you’re through … either way.”

Around midnight, alone in the Oval Office, the president recorded his recollections of the meeting earlier that day. “I was most anxious,” he stressed, that we not “announce a state of war existing,” because a declaration of war would be an excessive and risky provocation. Instead, he would order the Navy to implement “a limited blockade for a limited purpose”—one which interdicted only military equipment and weapons but, unlike the Soviet Berlin blockade of 1948, did not affect food, fuel, medicine or any other civilian necessities.