Capturing History as it Really Happened in October 1962 (Part 1) 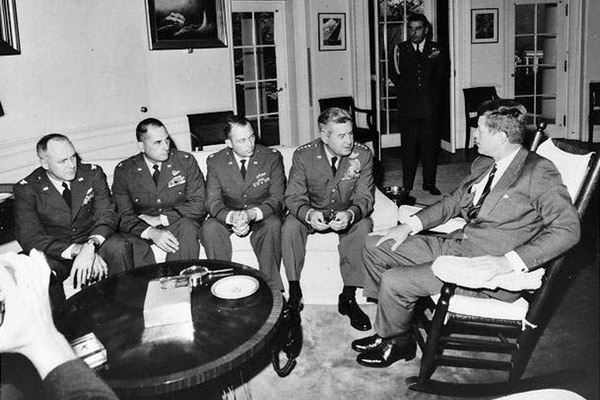 Historians are obviously familiar with research based on old or new primary sources as well as with work that synthesizes both primary and secondary sources. Historical investigation based on audio recordings, however, is clearly distinct from these more traditional categories of historical investigation because, as Max Holland and I wrote in 2005—

the historian shoulders an even larger burden in this new genre. He or she is obviously selecting, deciphering, and making judgments about a primary source, much like the editor of a documentary collection. But, in the process of transcribing a tape recording, the historian is also creating a facsimile—while still endeavoring to produce a reliable, “original” source. In essence, the historian/editor unavoidably becomes the author of a “new” source because even a transcript alleged to be “verbatim” is irreducibly subjective at some level. As a result, the historian’s responsibility in this genre is a very unusual one, and requires the most careful scholarship imaginable. No other task of discovery and/or interpretation in the historical canon is quite comparable.

As the audio recordings from the Kennedy, Johnson, and Nixon presidencies have gradually been made public, historians have been drawn to this extraordinary challenge. As Columbia University’s Alan Brinkley concluded, “No collection of manuscripts, no after-the-fact oral history, no contemporary account by a journalist will ever have the immediacy or the revelatory power of these conversations.”

My own work, which includes the three books cited above on the JFK Cuban missile crisis tapes, has underscored the unique value of these recordings, for example, by demonstrating—conclusively and incontrovertibly—that Robert Kennedy’s Thirteen Days should no longer be taken seriously as a historically reliable account of the October 1962 White House ExComm meetings.

Last month the History News Network ran my short piece about a fascinating and surprising exchange between President Kennedy and Republican House Minority Leader Charles Halleck at the height of the Cuban missile crisis. In fact, there are many such dramatic and revelatory exchanges on the ExComm tapes and editor Rick Shenkman has agreed to my suggestion to periodically offer HNN readers additional historical snapshots of some of the most striking moments on these unique recordings.

On Sunday, October 14, 1962, U-2 photos revealed solid evidence of Soviet ballistic missile sites in Cuba. National Security Adviser McGeorge Bundybrought the photos to the White House early on October 16. President Kennedy, his face and voice taut with anger at Soviet duplicity, reeled off the names of key members of the National Security Council and told Bundy to organize a meeting later that morning. He then summoned his brother, Attorney General Robert Kennedy, to the White House. “Oh shit! Shit!, Shit! Those sons a’ bitches Russians,” RFK exclaimed after seeing the U-2 pictures. The Kennedys had tried over forty back channel contacts with an official at the Soviet embassy in an effort to deter Khrushchev. Their efforts, as a result of calculated Soviet deception, had come to nothing.

The Soviets and Cubans, of course, were aware of the Kennedy administration’s own deceptions, namely the secret war in Cuba, which included sabotaging the Cuban economy and plots to assassinate Fidel Castro. Nikita Khrushchev claimed that the Soviet nuclear missiles in Cuba were defensive—to protect Castro’s revolution against another American attack. Khrushchev also anticipated that Kennedy would accept the deployment in Cuba as a reasonable counterweight to American missiles in Turkey and Italy. But, the Soviet leader grossly underestimated the intensity of American fears of a communist military outpost in the Western Hemisphere.

As the president’s advisers entered the Cabinet Room, the human implications of the situation was made poignantly plain when they found JFK talking with his nearly five-year-old daughter, Caroline. She quickly scurried from the room and the meeting began. The fifteen men gathering that morning were stunned that the Soviets had taken such a gamble just ninety miles from the Florida coast and infuriated that the administration had been deceived by top Kremlin officials. President Kennedy assumed that if the U.S. took military action against Cuba, the U.S.S.R. would move against West Berlin. The U.S. would be forced to respond; the Soviets would react in turn—and so on—escalating towards the unthinkable. A reckless or careless move could set in motion an irreversible and catastrophic chain of events.

Nonetheless, the tone of the discussions was nearly always calm and businesslike—making it difficult for the listener to grasp that the stakes were potentially nothing less than human survival. The meetings were also remarkably egalitarian, and participants spoke freely with no regard for rank. Indeed, there were repeated disagreements with the president—sometimes bordering on rudeness and disrespect. There were also moments of laughter, clearly an emotional necessity in coping with what became nearly two weeks of unrelenting, around-the-clock anxiety and uncertainty.

The overriding question was clear at the outset: what exactly were the Soviets doing in Cuba? JFK and most of his advisers had little or no experience in photo analysis, and the strange objects in the U-2 pictures could easily be mistaken for trucks or farm equipment. Arthur Lundahl, director of the National Photographic Interpretation Center, and missile expert Sydney Graybeal were on hand to explain the evidence. The president pored over the photos using a large magnifying glass and participants later recalled that he appeared nervous and exasperated.

Deputy CIA director General Marshall Carter began by identifying fourteen canvas-covered missile trailers, sixty-seven feet in length and nine feet in width, photographed on October 14 at an MRBM site in San Cristobal. Lundahl pointed to small rectangular shapes and whispered to the president, “These are the launchers here.” President Kennedy then asked how far advanced the construction had been when the photos were taken. Lundahl admitted that his analysts had never seen this kind of installation before. “Not even in the Soviet Union?” Kennedy pressed. “No sir,” Lundahl replied.

The CIA had kept careful tabs on Soviet missile bases, but Lundahl reminded the president that surveillance had been suspended after a U-2 was shot down in 1960. “How do you know this is a medium-range ballistic missile?” Kennedy asked. “The length, sir,” Lundahl responded patiently. “The length of the missile?” Kennedy replied, examining the photo, “Which part?” Graybeal handed the president photos of missiles from the U.S.S.R.’s annual May Day parade. JFK then asked grimly if the missiles in Cuba were ready to be fired; not yet, Graybeal declared. The bases, however, were being assembled more rapidly than similar sites previously observed in the U.S.S.R., and no one could be sure when the missiles would be ready to launch their deadly payloads at military sites or cities in the U.S.

Defense Secretary Robert McNamara pressed Graybeal further—were Soviet nuclear warheads also in Cuba? “Sir, we’ve looked very hard,” Graybeal replied. “We can find nothing that would spell ‘nuclear warhead.’ ” He added, however, that the warheads could be mounted on the missiles in just a few hours. General Maxwell Taylor, chairman of the Joint Chiefs of Staff, also stressed that the sites could rapidly become operational. McNamara insisted that the Soviets would never risk a military confrontation over missiles that did not have nuclear warheads: “There must be some storage site there. It should be one of our important objectives to find that storage site … but it seems extremely unlikely that they are now ready to fire, or maybe ready to fire within a matter of hours, or even a day or two.” The missile bases apparently did not have to be attacked—at least not immediately. One decision quickly commanded a consensus: the president should authorize further U-2 flights to locate any other missile bases and the elusive warheads and storage sites.

General Taylor, however, deepened the uncertainties facing the president by acknowledging that it was impossible to be certain exactly when the missiles sites would become operational and, in any event, air strikes would not destroy “a hundred percent” of the missiles. Secretary of State Dean Rusk agreed, and cautioned that if the Russians “shoot those missiles,” before, during, or after air strikes, “we’re in a general nuclear war.” McNamara agreed that air strikes had to be carried out before the missiles became operational: “if they become operational before the air strike, I do not believe we can state we can knock them out before they can be launched, and ifthey’re launched, there is almost certain to be chaos in part of the East Coast or the area in a radius of six hundred to one thousand miles from Cuba.” Less than an hour into their first meeting, the president and his advisers were confronting the possibility that millions of Americans might be only hours away from a nuclear attack.

One key question remained—what was the Soviet motive for a nuclear presence in Cuba? “There must be some major reason for the Russians to set this up,” JFK speculated. “Must be that they’re not satisfied with their ICBMs.” Taylor agreed that Soviet short-range missiles in Cuba supplemented “their rather defective ICBM system.” But, no one in the room raised the possibility that Khrushchev might be trying to protect Cuba from the Kennedy administration’s covert war against Castro’s government.

Next: Attorney General Robert Kennedy speaks up for the first time.