Was Robert Kennedy Really the Dove He and Arthur Schlesinger Jr. Made Him Out to Be During the Cuban Missile Crisis? (Part 2) 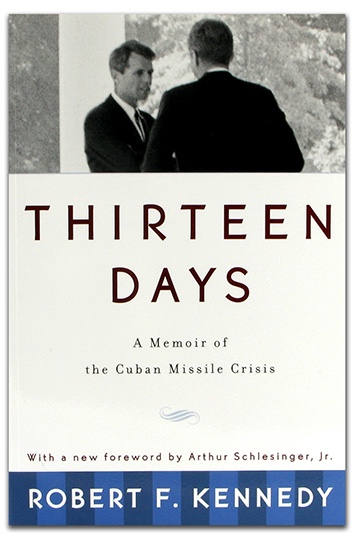 Attorney General Robert Kennedy spoke up for the first time about an hour into the first ExComm meeting on October 16. RFK was an ardent supporter of plans to subvert the Cuban government and/or assassinate Castro and chaired The Special Group Augmented which coordinated the secret war against Cuba. Now, speaking directly to his brother, he declared forcefully that if hundreds of air sorties were carried out, “You’re droppin’ bombs all over Cuba. … You’re covering most of Cuba. You’re gonna kill an awful lot a people, and we’re gonna take an awfullot a heat on it.” These words were first discovered in RFK papers by his 1978 biographer Arthur Schlesinger, Jr., admittedly “a great admirer and devoted friend.” “Robert Kennedy was the indispensable partner,” Schlesinger concluded. “Without him, John Kennedy would have found it far more difficult to overcome the demand for military action. … It was Robert Kennedy who stopped the air strike madness in its tracks. … Within the closed meetings of the … [ExComm], Robert Kennedy was a dove from the start.” 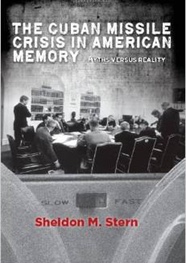 Schlesinger’s judgment, which dovetailed perfectly with RFK’s personal account in Thirteen Days (1969), is actually extremely misleading if not intentionally deceptive. In fact, the younger Kennedy was really arguing that bombing Cuba was a weak and inadequate response; he was instead demanding nothing less than a full land, sea, and air invasion of Cuba! When General Taylor responded that it would take at least seven days to coordinate a full invasion, RFK replied irritably, “Is it absolutely essential that you wait seven days after you have an air strike?” Taylor explained that positioning ships and troops for an invasion would sacrifice the element of surprise, but RFK suggested that tensions over Berlin could be used as a cover story to explain such military preparations. It would be better, he demanded, “If you could get it in, get it started, so that there wasn’t any turning back.”

Later that evening, RFK emphatically rejected a naval blockade option as well: “We’re gonna have to sink Russian ships,” he declared fervently. It was better to stand up to Khrushchev now and take the consequences: “We should just get into it, and get it over with and take our losses if he wants to get into a war over this. Hell, if it’s war that’s gonna come on this thing, you know, he sticks those kinds of missiles in after the warning, then hey, he’s gonna get into a war six months from now or a year from now.” He even suggested using the U.S. naval base at Guantánamo Bay to stage an incident that would justify military intervention: “You know, sink the Maine again or something!”

By October 18th, the president and many of his advisers were leaning toward a blockade of Cuba, rather than bombing or invasion, as a limited first step which would give the Soviets time to reconsider their own options. RFK was clearly unimpressed and when one of the participants speculated about whether a blockade had a chance of “bringing down Castro,” he interjected derisively, “Has a blockade ever brought anybody down?” A day later he declared “it would be better for our children and grandchildren if we decided to face the Soviet threat, stand up to it, and eliminate it now. The circumstances for doing so at some future time were bound to be more unfavorable, the risks would be greater, the chances of success less good.”

On October 22, JFK announced the blockade decision in a nationally televised speech. Bobby Kennedy’s doubts persisted and he warned that the blockade might be perceived by the press and the public as too little, too late, and the president could be accused of “closing the barn door after the horse is gone.” The next day, after President Kennedy signed the blockade proclamation, RFK argued that it would be “damn helpful” to seize a Soviet ship, even if it turned around before reaching the naval blockade line, in order to examine Soviet weapons and technology. Secretary of State Dean Rusk disagreed, patiently lecturing the attorney general, “from the Soviet point of view they’re gonna be as sensitive as a boil because it’s whether they think we’re really trying to capture and seize and analyze and examine their missiles and their warheads and things. Now the purpose [of the blockade] is to keep ‘em out of Cuba. This adds a very important element into it, you see.” The president opted to delay any decision, in essence siding with Rusk.

Bobby Kennedy’s hawkish views never really changed. On October 25 he urged the president to revive the bombing option that had been rejected during the first two weeks. The administration, he reasoned, should put the air strikes back on the table in order to demonstrate “that we’re not backing off and that we’re still being tough with Cuba. That’s really the point we have to make. … [so that] “[w]e don’t look like we’re weakening on the whole Turkey complex. … The only weakness in my judgment, is the idea to the Russians that you know [we’re] backing off and that we’re weak.” During the first week, the attorney had questioned (as mentioned in Thirteen Days) whether a major power like the United States should bomb a small country like Cuba without warning. Now he neatly sidestepped his earlier opposition to an American Pearl Harbor by proposing to warn Soviet personnel “to get out of that vicinity in ten minutes and then we … knock off the base.”

Robert Kennedy remained a leading hawk throughout the 13 Days of discussions. Most importantly, he led the virtually unanimous ExComm effort on October 27th to resist the president’s determination to secretly agree to withdraw U.S. missiles from Turkey and Italy if Khrushchev withdrew Soviet missile from Cuba. Indeed, Bobby Kennedy’s final words of the tapes, immediately after defense secretary Robert McNamara affirmed that we “need to really escalate this” and have ready “a government for Cuba, because we’re gonna need one after we go in with 500 aircraft,” was to murmur wistfully, “Yeah. I’d like to take Cuba back. That would be nice.”