Rebecca L. Davis is the Miller Family Endowed Early Career Professor of History at the University of Delaware and the author of the new book Public Confessions: The Religious Conversions that Changed American Politics (University of North Carolina Press). 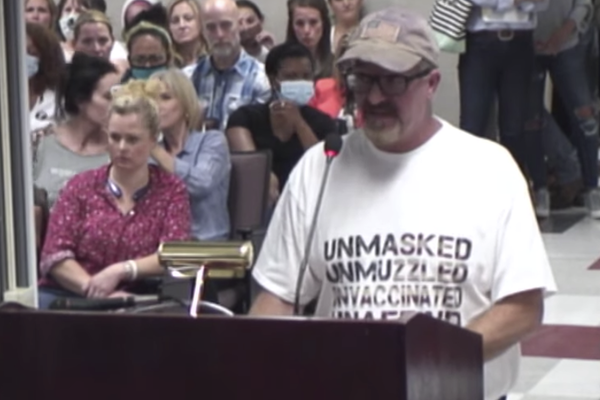 This speaker invoked Judges 15:15 saying, "We the parentshave our metaphorical jawbone of an ass and we're ready to smite a thousand men. Your move."

At one recent school board meeting in suburban Philadelphia, a woman wearing a shirt with the slogan “StopMedicalTyranny” concluded her anti-masking testimony by arguing that trans-positive books teach children that they may “choose” their gender. Then she offered a prayer, “in Jesus name,” asking among other things that God “guard our children’s minds from harmful instruction.” She believed that her ultimate freedom to make choices for herself and her children, in other words, was imperiled by teachers who imposed ideas she opposed. Similar protests against mask and vaccine mandates have erupted in school districts across the United States.

Religious conversion, an especially transformative sort of personal decision, is fundamental to these politics of “freedom” and “choice.” White evangelical Protestants, in particular, have crafted an argument for conversion as the paramount choice or decision, creating an identity that determines an individual’s spiritual as well as political beliefs. In the late 1960s and early 1970s, evangelical Protestantism was a still-marginal movement on the cusp of greater popularity and power. Evangelical leaders realized that born-again conversions could meld the ideas of being saved, privileging whiteness, and opposing LGBTQ rights.

This history of born-again conversion and American politics helps explain why a surprising number of public comments against school mask mandates include tirades against LGBTQ-inclusive curricula.

Many of the individuals and groups organizing in opposition to mask and vaccination mandates are tied to conservative evangelical and Christian nationalist groups. Taught that they are defending American values and fighting a tyrannical, coercive mandate by un-Christian authorities, they rise to defend what they believe is their Constitutional right to disobey public health policies.

The idea of the born-again conversion as we understand it today originates with eighteenth-century Methodists, who first popularized the spontaneous conversion. Over the next two centuries, Protestant revivals created ecstatic converts who were born again in Christ. In the 1940s and 1950s, celebrity preacher Billy Graham introduced the idea of making a “decision for Christ” during his mid-twentieth-century crusades and in his convert-seeking magazine, Decision. Passionately anti-Communist, Graham nudged his conservative evangelical followers to conflate their Christian faith with American freedoms and to understand Communism as coercive mind-control.

The particular mix of born-again conversion, anti-gay animus, and the defense of American “freedoms” emerged in the 1960s and 1970s. The overwhelmingly white leaders of conservative evangelical organizations widely criticized the social movements of the era, from Black civil rights to women’s and gay liberation. Looking for ways to exert greater influence over American politics, they landed on a narrative that merged the idea of choosing Christ and defending freedom.

White evangelical leaders recognized that one way they could gain legitimacy was by showcasing the startling conversions of ex-cons and iconoclasts. A fast-growing evangelical media industry celebrated these converts and promoted their stories. Christian publishers and broadcasters plugged the California hippies who became Jesus People and the conversions of notorious political operatives such as Charles (“Chuck”) Colson, the convicted former aide to President Richard Nixon. Prominent born-again conversions were upheld as proof of evangelicalism’s legitimacy.

Evangelical leaders leaned on the concept of choice to distance themselves from contemporaneous expressions of religious fervor in new religious movements. The International Society for Krishna Consciousness, for one, found youthful followers among many of the same seekers who flocked to mass baptisms in the Pacific Ocean. Evangelicals stressed the profound differences between being “brainwashed” into a “cult” and being born again. One experience was the result of coercion; the other, of choice.

Fears of brainwashing and coercion had been amplified in American culture since the earliest years of the Cold War. By the 1960s and 1970s, mainstream books and films abounded with “Manchurian candidates” and “body snatchers.” They made visible a host of anxieties about the danger of external ideologies that might take hold of an individual’s mind and force it to adopt new values and beliefs.

Queer desire struck white evangelical leaders as emblematic of the sort of “choice” that nefarious actors could force upon the supple minds of the young. Building on decades of anti-gay rhetoric from pulpit and pew, ex-gay ministries emerged in the 1970s to warn that gay men and lesbians “recruited” naïve youth and forced them to choose a gay lifestyle. The only solution, ex-gay programs insisted, was simultaneous conversion to Jesus Christ and to heterosexuality.

The contrast between freely chosen faith and coercive, damaging ideologies shaped the Christian right’s ex-gay politics. Evangelical Protestants and their allies organized campaigns (many of which succeeded) to prohibit queer people from employment as public school teachers, lest they “brainwash” their students. While an outsider (or anthropologist) might conclude that evangelical proselytizing has more than a passing resemblance to such recruitment, evangelicals insisted that their witness offered the only choice that preserved individual freedom.

This historical background helps explain why so many anti-mask-mandate and anti-vaccine activists are white Christians who lace their testimony before school boards with condemnations of transgender-positive curricula. Today, evangelicals tend to be those most opposed to very concept of transgender identity, let alone trans rights. According to a Pew Research Study from 2017, 84 percent of white evangelical Protestants said that “gender is determined by sex at birth,” and 61% said American society had “gone too far” in accepting transgender people. Those numbers were much higher than for Christians generally (63% gender is determined by sex at birth; 39% “gone too far”) and for the unaffiliated (37% and 57%, respectively). They align closely with differences between how Republicans and Democrats answered the same questions.

This opposition puts lives at risk. Trans-affirming experiences in school (not to mention at home) can be life-saving for nonbinary and gender-expansive young people. In a 2018 study, the American Academy of Pediatrics found that nearly 42 percent of trans and nonbinary adolescents had attempted suicide, compared to 14 percent for adolescents overall. The following year, the Trevor Project reported the results of its own survey, finding that the support of even one adult reduced suicide attempts among LGBTQ young people by 40 percent.

Activists shout over school board officials about mask and vaccine mandates, and they denigrate books and curricula that might be life-saving for trans and nonbinary youth. Yet they insist that white, heterosexual Christians are the real victims. That thinking, too, has a history in 1970s white evangelicalism. By contrasting the hard-won freedoms of the born-again convert to the easy mass conformity of secular culture, conservative evangelicals portray their faith as a marginalized but superior bastion of truth.