Historians' Perspective on Media Bias: Where it Came from, and What Can be Done? 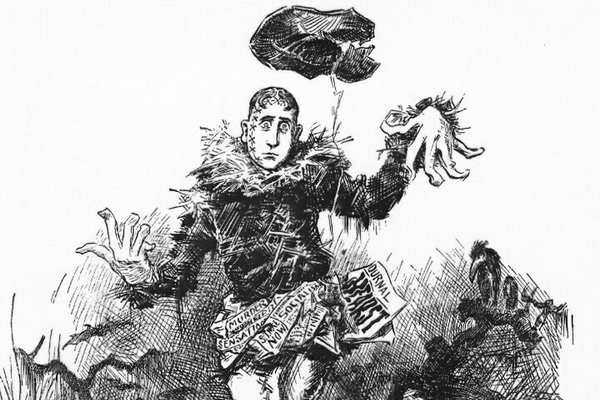 A 1906 Harper's Weekly cartoon by W. A. Rogers depicts William Randolph Hearst as "The Wizard of Ooze."

Bias--an “attitude held towards a person or group that is not justified by the facts”--in U. S. media has long been present. In recent decades, however, it has exploded and caused great harm, ratcheting up political polarization.  Historians understand the need for avoiding bias in their works and can contribute important insights to the general public. Whether in this age of Facebook, Fox News, and “fake news” members of the public really care about facts and wish to reject bias and prioritize truth is another matter.

A central problem of our day--and countless previous days--is that many of us care more about confirming our own biases than we do about finding the truth. A wise man once wrote, “Values are at the heart of the matter” and quoted another wise man who stated,  “Human value priorities. . . stand out as the most strategically powerful causal control now shaping world events.”  If we value our fragile egos (or, e.g., racist or nationalistic beliefs) more than truth, then bias and political polarization will continue to wreak havoc in our world.

An early commentator on print opinions was Benjamin Franklin, who started off as a pioneering newspaper man. In 1731, in his “Apology for Printers,” he wrote,

“That the Opinions of Men are almost as various as their Faces. . . . That the Business of Printing has chiefly to do with Mens Opinions. . . . Printers are educated in the Belief, that when Men differ in Opinion, both Sides ought equally to have the Advantage of being heard by the Publick; and that when Truth and Error have fair Play, the former is always an overmatch for the latter.”

(Note that Franklin is talking about the right to one’s own opinions, not one’s own “facts.” As Sen. Daniel Moynihan later indicated, everyone is entitled to his own opinion, but not his own facts.)

Franklin never lost his appreciation of tolerance and openness to different opinions. Two years before the First Amendment to the U.S. Constitution guaranteed free speech in 1789, he said, “For having lived long, I have experienced many Instances of being oblig'd, by better Information or fuller Consideration, to change Opinions even on important Subjects, which I once thought right, but found to be otherwise. It is therefore that the older I grow the more apt I am to doubt my own Judgment, and to pay more Respect to the Judgment of others.”

Although newspapers and pamphlets became more partisan during the revolutionary period of the late eighteenth century, and pro-independence ones outnumbered those favoring remaining a British colony, at least there were still some reflecting the latter position.

In 1798, Congress passed and President John Adams approved the Alien and Sedition Acts, which mandated the fining, deportation, or imprisonment of anyone publishing “false, scandalous, or malicious writing” against the U. S. government. Republicans like Jefferson and Madison attacked it as curtailing free speech, and the Act expired in March 1801. Their stand helped Jefferson win the bitterly contested 1800 presidential campaign against Adams and his Federalist supporters.

Although that political campaign was full of invective, in his First Inaugural Address (1801) Jefferson warned against any “future political intolerance,” of considering “every difference of opinion . . . a difference of principle,” and he urged social harmony that would unite “in common efforts for the common good.”

By the time Andrew Jackson was elected in 1828, the electorate had broadened and the number of newspapers had significantly increased. One work on the 1828 campaign, The Birth of Modern Politics: Andrew Jackson, John Quincy Adams, and the Election of 1828, mentions it containing many elements of modern campaigning, including dirty tricks and smear tactics. Among the charges leveled against Jackson was that he had once engaged in the slave trade. (A slave-owner himself, in 1835 Jackson approved of his postmaster general’s curtailing of abolitionists’ anti-slavery mailings.)

The mention of abolitionists brings up the whole question of objectivity in history. Thomas Haskell has written that “objectivity is not neutrality.” One can be passionate about a cause--for example, abolishing slavery--without being biased. Bias is an attitude not justified by facts; and in their opposition to slavery, men like the journalist  William Lloyd Garrison (1805-1879) and abolitionist Frederick Douglass (1817-1895) were not twisting the facts when they spoke of the evils of slavery.

Someone who did twist the facts was William Randolph Hearst (1863-1951), the most influential media personality of his day, and the model for the influential film Citizen Kane. As David Nasaw’s biography The Chief  indicates, beginning in the late nineteenth century Hearst “built the nation’s first media conglomerate by extending his newspaper empire horizontally into syndicated feature, photo, and wire services; magazines; newsreels; serial, feature, and animated films; and radio.”  By “the 1930s, one in four Americans got their news from Hearst, who owned twenty-eight newspapers in nineteen cities.”

In the review of Nasaw’s biography in the left-leaning The Nation, Dana Frank wrote that “his papers baldly submerged fact with fiction,” and “his papers lied like a rug.” Frank goes on to write of Hearst’s political ambitions, his “unchecked egomania,” and willingness to gladly “unleash his papers like an attack dog on whichever political candidate he happened to oppose that week.”

Historian Jill Lepore also credits Hearst with helping give birth to the field of political consulting, when in 1933 one of his  newspapers’ writers, Clem Whitaker, co-founded CAMPAIGNS, INC. , “the first political consulting firm in the history of the world.” It had “one foot in advertising and one foot in journalism,” and its “critics called it the Lie Factory.”(The title of Joe McGinniss’s The Selling of the President 1968 hints at how much advertising increasingly came to influence political campaigning.)

Without a doubt, Hearst deserves considerable blame for much of media’s fixation on goals, from political motives to profits, other than pursuing truth. After Hearst came out in opposition to President Franklin Roosevelt, FDR in 1935 said “there was no man . . . as vicious an influence as Hearst.”

At roughly the same time as FDR’s remark a young Texas college student, Walter Cronkite, having earlier begun as a newspaper reporter, now landed a job with an Austin radio station.  Decades later in 1962 he became the anchorman for CBS  television news, a position he retained for two decades. In 1972, people surveyed in eighteen states chose him as the “most trusted” public figure in America.

Cronkite followed in the tradition of the pioneering TV newsman Edward R. Murrow, who had greatly impressed him when he began listening to Murrow’s European broadcasts in the late 1930s. Although Murrow later became well know for his criticism of Sen. Joe McCarthy, in 1954 he defended himself against the senator’s charges by ticking off how each one was false and by saying that he (Murrow) “attempted to pursue the truth with some diligence and to report it.”  In 1958 Murrow criticized TV for being primarily “used to distract, delude, amuse and insulate” Americans and for failing to reflect adequately “the hard, unyielding realities of the world in which we live.”

In the 1960s there were still a significant number of television newspeople like Murrow and Cronkite, some of them labeled “Murrow Boys,” who tried to avoid bias and report and investigate truthfully, but that was about to change.

Both historian Lepore and  political scientist Robert Putnam see a trend toward greater bias and political polarization during the last half century. When ABC, CBS, and NBC were the only major TV networks, Lepore writes that “polarization was the lowest it had ever been, both before and since.” She thinks the rise of cable news in the 1980s and 1990s, especially the 1996 launching of the contrasting left vs. right MSNBC and Fox News, was especially significant. So too was the rise of the Internet and social media.  She adds that the latter, expanded by smartphones, “provided a breeding ground for fanaticism, authoritarianism, and nihilism,” and it “exacerbated the political isolation of ordinary Americans while strengthening polarization on both the left and the right.”

During the last decade, polarization has been increased by growing distrust in scientific findings in regard to such areas as climate change and coronavirus research.   In 2010 President Obama was concerned enough about bias and polarization to repeat Sen. Moynihan’s words about everyone being entitled to his own opinion, but not his own facts. And the president warned that “if we choose only to expose ourselves to opinions and viewpoints that are in line with our own,” we will “become more polarized.” During Trump’s presidency, increasing talk about our being in a “post-truth” world and his ranting about fake news furthered biases and lack of respect for truth.

So where does that leave us today, and how can historians help us overcome our biases and polarization? Works such as C. Behan McCullagh’s essay “Bias in Historical Description, Interpretation, and Explanation,” where he insists that “bias of any sort, be it cultural or personal, is deplorable,” are helpful. But mere reflection on our own training and experiences as teachers, writers, and promoters of history should dictate the following, not only regarding our own writing and teaching, but also as guides for gathering any information. (Perhaps commentators can add more.)

If we historians teach and practice such guidelines, perhaps we can do our small bit to reduce public bias.