Is the Presidency a License to Kill? War Powers and the Constitution

Paul W. Lovinger is a San Francisco journalist, author, editor, and activist. He may be reached through http://www.warandlaw.org. 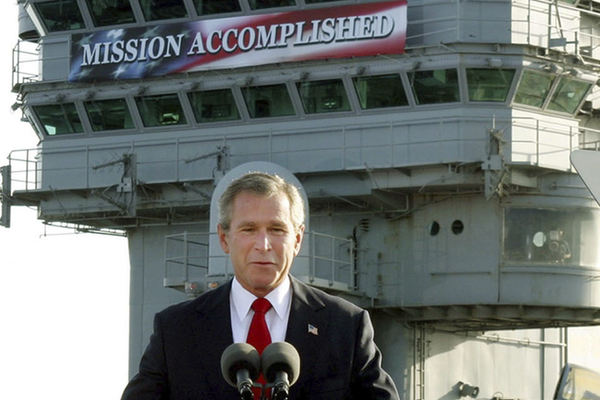 George W. Bush was not alone among modern presidents in waging war without the constitutionally-mandated Congressional declaration of war.

George Washington presided as delegates to the Federal Convention in Philadelphia drew up the United States Constitution in some four months of 1787. Signers numbered 39, of 55 who attended, representing 12 states (Rhode Island absent).

History taught them “the executive is the branch of power most interested in war, and most prone to it” (James Madison). Monarchs often made war “for purposes and objects merely personal, such as a thirst for military glory, revenge for personal affronts, ambition ...” (John Jay). To discourage war, delegates allowed only Congress “to declare [i.e. initiate] war” (Article I, Section 8, Clause 11).

But they made two errors, one of commission, the other omission:

Some delegates opposed a one-man executive. Governor Edmund Randolph of Virginia called it “the foetus of monarchy.” He and Virginian George Mason favored giving three men joint executive power. Others, notably James Madison and Benjamin Franklin, wanted at least a council to assist the executive.

The delegates made the president the army and navy’s “commander-in-chief,” a historic, strictly military position. Convention records don’t explain why they thought everyone elected president would be qualified—or why they trusted him not to misuse the power and initiate war.

Washington and other early presidents respected Congress’s constitutional war power. Some presidents, from Polk to Franklin Roosevelt, undermined it by provocation or circumvention. Outright defiance began with Truman. Every subsequent president has emulated him in some way. Yet all presidents take the oath to “preserve, protect and defend the Constitution” required by Article II, Section 1, Paragraph 8.

The delegates did their best. Theirs was a noble experiment. The experiment failed.

Three decades ago, President George Herbert Walker Bush massed troops in Saudi Arabia, preparing to wage war on Iraq, He railed against its invasion of Kuwait, ignoring his own invasion of Panama a year earlier. Bush claimed the authority to start a war as military commander-in-chief.

On constitutional grounds, 54 members of Congress, led by Rep. Ron Dellums (D-California), sued to prevent the conflict. Federal Judge Harold H. Greene found the plaintiffs justified (12/13/90): The Constitution’s framers “felt it unwise to entrust the momentous power to involve the nation in a war to the president alone.” Hence “the clause granting to the Congress, and to it alone, the authority to decide war.”

Greene refused to issue an injunction however: Until a majority of Congress acted and war was certain, the case was not “ripe.” At least, like early U.S. judges, he tackled the constitutional issue. Modern courts usually duck such cases, saying plaintiffs lack standing to sue, raise a “political question,” et cetera.

Senator Joseph R. Biden Jr. (D-Delaware), chairman of the Senate Judiciary Committee, called a hearing on constitutional war power (1/8/91) and said, “In England the king alone could decide to take a nation to war.” Here “the war power rests in the Congress.... The Constitution’s founders all understood this to be a key principle of our republic.”

Biden quoted Alexander Hamilton: “commander-in-chief” amounts to just “supreme command and direction of the military and naval forces as first general and admiral....”  The president lacks the British king’s powers to declare war and raise and regulate fleets and armies—powers our Constitution gives the legislature (The Federalist, 69).

Biden went on: “Americans once lived under a system where one man had unfettered choice to decide by himself whether we go to war ... and we launched a revolution to free ourselves from the tyranny of such a system.”

Bush relented and allowed a congressional vote. It went his way, helped by testimony falsely alleging atrocities by Iraqi soldiers. Biden voted no.

Biden’s 2007 memoir says he pressed President Clinton to bomb Serbia. Clinton did so in 1999, ignoring Congress. Biden urged him to keep it up.

In 2002, as chairman of the Senate Foreign Relations Committee, Biden supported a resolution (originating in the White House) to let President George W. Bush decide whether to fight Iraq. The measure, adopted, violated the Constitution. As Biden had insisted 11 years earlier, such a decision was for Congress to make.

In the 2020 debates, then Vice-President Biden made known he would send forces into combat “very, very reluctantly” and only when the “overwhelming, vital interests of the United States are at stake.” He did not mention Congress.

Spokesmen gave various imaginative explanations for the aggression. It was “defensive” and “retaliation” for an attack on U.S. forces in Iraq (though not an attack by Syria). It aimed to “deescalate” the regional situation and “to send a message to Iran.” What did that message say? Forget my pre-election promise of peace? An e-mail would have been clearer and saved a bundle. Nobody explained what overwhelming, vital interests of the U.S. were served by taking the 22 lives.

Based on Biden’s 1991 rhetoric, that act of war was also an act of “tyranny.” Such tyranny has arguably spanned some four score years, irrespective of the president’s political affiliation.

In Congress, reactions crossed party lines. The raid drew both praise for avenging attacks and condemnation for violating constitutional war power.  Prior congressional approval would not have sanctified the attack, though giving it constitutional legitimacy. Several U.S. treaties prohibit aggression.

Moreover, what about the long-suffering people of Syria, whose homeland foreign leaders have appropriated as a battleground? Ex-Representative Ron Paul (R-Texas) expressed sympathy, writing that Biden, Trump, and Obama all deserved impeachment for attacking Syria.

Throughout their terms, both Trump and Obama conducted unauthorized military actions in Asia and Africa. Biden’s election platform promised to end “forever wars.” Syria aside, how is he doing?

Two days after inauguration, U.S. forces conducted an “emergency response” exercise in Somalia. Five days later came a U.S.-led air attack in Iraq, killing 11 “ISIS” people.  The Afghanistan war still rages. Biden supposedly halted support for the ravaging of Yemen, yet, without congressional authority, he promises to defend the Saudi monarchy, which perpetrates it. He assures Israel he will strengthen military cooperation. He deploys bombers to Norway. Warships approach China and Russia, as Biden insults and threatens America’s top nuclear rival. (Putin, a “killer,” will “pay a price.”)

When Bush Senior invaded Panama, the late R. W. Apple Jr., chief New York Times Washington correspondent, postulated “a presidential initiation rite” since World War II for presidents “to demonstrate their willingness to shed blood ....” All believed “the American political culture required them to show the world promptly that they carried big sticks.” Bush—accused of timidity—showed by attacking he was “capable of bold action.”

Was that Biden’s “message”?

However administrations change, executive war-making persists. Imagine the reaction of the Constitution’s framers if they could see the power now at the president’s fingertips—capable of destroying life on earth.

the last 14 presidents, emphasizing war and violence. Reasons for the bloodshed are largely forgotten. These vignettes illustrate the executive’s affinity to war.

Donald Trump ran for president favoring both peace and the killing of “terrorists” and their families. In office, he escalated existing hostilities and loosened rules of engagement, causing soaring civilian casualties. MOAB (Mother of All Bombs), the largest non-nuclear U.S. bomb, was exploded for the first time in Afghanistan (casualties unannounced). Trump picked fights in Asia and Africa, renounced arms treaties, threatened North Korea with “fire and fury,” and supported Saudi assaults on Yemen, vetoing a congressional resolution to quit. He assassinated Iran’s top general, then ordered Iran bombed but changed his mind.

Barack Obama entered office opposing “dumb wars” but conducted them for his entire eight years, the first presidency to permit no peace. He escalated the Afghan war. His Libyan “no fly zone” became a war for regime change. He helped Saudis bomb Yemen. He plotted periodic drone assassinations in various countries and took pride in ordering Osama bin Laden shot, without trial, in Pakistan.

Bill Clinton intervened in eight countries during eight years in office. Clinton bombed Yugoslavia for 11 weeks, aided by NATO (supposedly dedicated to peace). He ignored Congress, even after it voted against upholding his war. Other victims of his: Afghanistan, Bosnia, Colombia, Haiti, Iraq, Somalia, and Sudan.

Ronald Reagan entered unauthorized hostilities in Lebanon, Grenada, and Central America. As though making up for a recent loss of 240 marines in a Lebanon bomb blast, he invaded Grenada, an island nation with one 2000th the U.S. population. About 80 were killed, including 20 Americans. With active CIA participation, Reagan sponsored the Nicaraguan Contras, whom he called “freedom fighters” but critics considered “terrorists.”  Scandal erupted when he sold Iran arms to finance the Contras. Reagan supported the Salvadoran regime despite its massacres of citizens, sending it military aid and armed “advisors.”

Jimmy Carter ran for office pledging to involve the American people in forming foreign policy. The only U.S. president since Hoover to wage no overt warfare, Carter covertly armed anti-Soviet fighters in Afghanistan, forerunners of al-Qaeda. He threatened force to defend U.S. interests in the Persian Gulf. Trying to rescue hostages in Iran, Carter lost eight servicemen in an air accident.

Gerald Ford, during his short, unelected term, sacrificed 41 Marines in a needless military assault on a Cambodian island. It aimed at freeing the Mayaguez, a merchant ship seized by Cambodia, which was preparing to free her anyway.

Richard M. Nixon and Lyndon B. Johnson before him led the U.S. Indochina

war, 1964–1973. The Wall in Washington, DC, commemorates 58,279 U.S. servicemen who fell in that presidential conflict—not Vietnamese, Cambodian, and Laotian victims, which number as many as 3.6 million. Nixon also intervened covertly in Chile and Johnson sent troops to the Dominican Republic

John F. Kennedy approved the CIA’s Bay of Pigs invasion and sabotage program in Cuba. To look tough, he risked war with Russia in demanding withdrawal of missiles it had installed in Cuba, though he had put missiles in Turkey and ordered plans to nuke Russia. He sent weapons and thousands of “advisors” to South Vietnam and covertly eliminated its peace-seeking president.

Dwight D. Eisenhower, commander of Allied European forces in World War II, inherited the Korean war, reaching an armistice in six months in 1953. He threatened to use nuclear weapons if war recurred, then made nuclear “massive retaliation” his general “defense” policy. Using the CIA, he overthrew governments in Iran and Guatemala and OK’d the invasion of Cuba. He sent military aid to Vietnam before and after the French left.

Harry S. Truman is infamous as the first to use atomic bombs, in annihilating Hiroshima and then Nagasaki. He also launched the practice of outright presidential war-making when in 1950 he ordered combat in Korea without congressional permission, claiming authority from the UN. His war killed nearly five million, the majority civilians. Truman armed rightist regimes and French forces fighting in Indochina.

Do we elect a chief executive—or a chief executioner? No president is likely to maliciously shoot someone to death point-blank. That’s murder. But no president seems to mind ordering many people shot or bombed in a distant land. That’s war.