A distinguished professor of history at the University of Puget Sound, Douglas Sackman is an historian of the North American West. His books include Wild Men: Ishi and Kroeber in the Wilderness of Modern America (Oxford) and Orange Empire: California and the Fruits of Eden (California). With John Lear, he directed the Dolliver project on the US-Mexico borderlands at the University of Puget Sound (2014-2018). 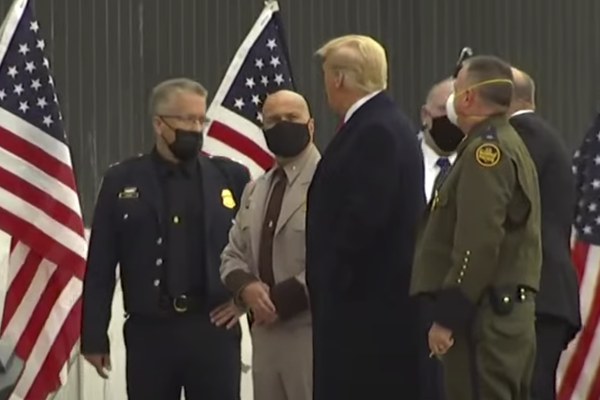 Donald Trump prepares to speak in front of his border wall in Alamo, TX.

Leaving rubble and smoke behind from the January 6 siege of the Capitol, Trump made a break for the border last Tuesday to Alamo. Not the Alamo—that monument stands 240 miles to the north in San Antonio. But this wasn’t a Four Seasons Total Landscaping sequel, Texas edition. Trump may not know much about history, but he knows American mythology. With his wall as a backdrop, any Alamo would do, he hoped, to create a last stand spectacle to remember.

Speaking before the glowering 30-foot high steel bollards, Alamo provided the symbolic and real ground of division to demanded to rehash the story that launched his campaign. He claimed that he inherited a “dangerously lawless border” but that the wall has “saved countless lives, and especially I have to say lives from crime.” He later put it at “thousands of innocent lives.” He also falsely credited his wall with saving millions of American jobs and “hundreds of billions of dollars a year” that would have been spent on narcotics enforcement and welfare for “illegal aliens” who would “abuse our welfare system.” As an added benefit, he claimed that the wall protects America from terrorists and the “China plague,” referring to the disease that has claimed over 380,000 lives on his watch.

The Alamo wall is ultimately a projection screen for Trump and all that he represents. Trump is the master projectionist, always accusing others of his own crimes and depravities. On this wall of projection, Mexicans are the ones who steal Americans’ hard earned money, destroy jobs, and claim thousands of American lives. On Tuesday, Trump made a point to praise officers who “swore a sacred oath” to distract from the fact that he had just broken his own in cataclysmic fashion.

Trump has returned to the well of racism because he has found that every time he descends, his number go up—just like they did after he came down the golden escalator in 2015 to announce his candidacy and charged “When Mexico sends its people, they’re not sending their best...They’re sending people that have lots of problems, and they’re bringing those problems with us. They’re bringing drugs. They’re bringing crime. They’re rapists.” He promised that day that “I will build a great, great wall on our southern border. And I will have Mexico pay for that wall. Mark my words.” By misappropriating Congressional funds and getting nothing from Mexico, Trump spent 15 billion dollars to put up 452 miles of new fence (almost all of it where old fences already stood) along a 1954 mile border. Another 315 miles of planned fencing remains in a state he called “either construction or preconstruction”—which in any state has done senseless damage to the environment and the sovereignty of Indigenous peoples along the border.  Scalable with a 30 foot ladder, the wall is his monument to xenophobia, physically incomplete and impotent. But symbolically, it completes him and would make him, he hoped, great again.

“America is a land of heroes,” Trump proclaimed at his last state of the union address to a joint session of congress in the Capitol. “This is the place where greatness is born, where destinies are forged, and where legends come to life....This is the place where the pilgrims landed at Plymouth and where Texas patriots made their last stand at the Alamo.” (He even wants Davy Crockett immortalized in a National Garden of American Heroes through a last ditch Executive Order issued in his last week in office ). At Alamo, he tried to lift himself up into that legendary script. But like most Americans, when Trump tries to “remember the Alamo” he gets it almost all wrong.

American immigrants to Mexico, who had been offered land to make a new life for themselves in Texas if they would assimilate and swear allegiance to Mexico, decided to rebel against their new country. The offer was made so that these invited settlers would become bulwarks against the two empires Mexico feared: The United States and the Comanches. It backfired: the Anglos rebelled, and the ranks of those who had been invited in through the policy were swelled by illegal immigrants from the United States. General Santa Anna’s army marched north to put down the rebellion, and laid siege to the insurgents holed up at the Alamo. Legend has it that William Travis drew a line in the sand, demanding that everyone willing to give up their lives step across it. The line drawing never happened, but it has become iconic. It is a line delineating us and them. It is a line manifesting manliness and destiny. It is a line of patriotism.

You still hear that those who stepped across it, as the legend goes, were stepping up for freedom, or for a way of life, or for something like a great state’s rights. In fact, they gave their lives for the cause of slavery, which Mexico was trying to abolish. That explains why the central myth of the Alamo is wrong: not everyone in the Alamo fought to the death that day. One of the survivors was a man named Joe enslaved by Travis; when Travis died, Joe hid. The Mexicans let him go free. Santa Anna paraded his army before Joe, boasting that he could march them all the way to Washington DC if he wanted.

It turns out that Santa Anna was wrong, and the Texas revolutionaries used the slogan “remember the Alamo” as a battle cry to ultimately defeat him at San Jacinto. When they did, there would be no freedom for Joe and any other Black men, women, or children in their new country. Not only would the Republic of Texas legalize slavery, it would declare even free Blacks to be slaves.  Joe, it turns out, was probably the grandson of Daniel Boone. America’s legends are always connected to slavery. Joe’s brother, William Wells Brown, had earlier escaped to freedom, and went on to become a legend in his own right as an abolitionist. Still enslaved, Joe escaped on the anniversary of the Battle of San Jacinto in 1838, when his captors were otherwise occupied commemorating Texas freedom. Focusing on the self-sacrifice of the white male slaveholders at the Alamo cast as freedom fighters masks the true nature of their cause: waging war for white supremacy.

Many of the insurrectionists at the Capitol on Wednesday see themselves as latter-day Travises, Bowies and Crocketts—complete with coonskin hats, or one with horns. As one shell-shocked Republican Representative observed, “They come here and Trump’s made them think this is the Alamo.”   If we were to really remember the Alamo, we would see how its battle cry echoed in the Capitol on Wednesday, when a rag tag army of white supremacists unfurled the Confederate Flag, hurled the n-word at African American members of the Capitol Police, and claimed they were the ones who were fighting for their lives and for freedom with their backs up against a wall.

Remember Joe, and the legend looks different. Remember Eugene Goodman, the Black officer who used his intelligence and body to lure the lynch mob away from the chambers of the beating heart of democracy. Forget the Alamo.