There is Nothing Sacred About the Military Vote

Dr. Rachel Gunter is a Professor of History at a North Texas community college. 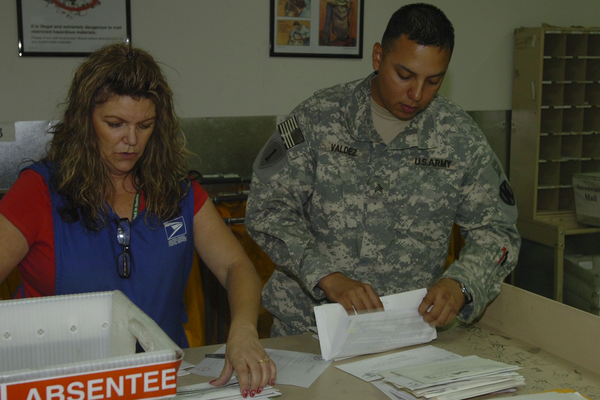 More than half of states allow military absentee ballots received after election day to still be counted. On social media on the night of October 30, in response to the 8th Circuit’s decision to bar Minnesota from counting ballots received after election day, Senator Brian Schatz asked a valid question: would this ruling lead Minnesota to “invalidate a bunch of overseas military ballots?”

Some commenters assumed that Republicans would find a way to allow military votes while disqualifying others, but don’t count on it. Parties comfortable with using extraordinary measures including disfranchisement to win elections won’t be swayed by appeals to their conscience; only mass voter turnout combined with national outrage have proven effective.

The first American soldiers able to vote while deployed were California residents deployed during the Civil War. They helped push Republican Abraham Lincoln to reelection in 1864. During World War I, several states legislated absentee balloting for military personnel, while the U.S. military issued general orders to help deployed servicemen vote absentee if their states permitted. Several states did not establish absentee military balloting though, while others deliberately manipulated the soldier vote in an attempt to retain power.

In 1918, Oklahoma’s anti-suffrage Governor Robert L. Williams joined Election Board Chairman W.C. McAlester to ensure the defeat of a state woman suffrage amendment. For an amendment to pass under Oklahoma’s 1910 Silent Voter Clause (passed the same year as its infamous Grandfather Clause), it had to have more yeas than nays and abstentions combined; an Oklahoma voter who did not vote on the amendments effectively voted against them.

Anti-suffragists argued that woman suffrage would be insulting to WWI servicemen: “[S]hould woman suffrage carry in Oklahoma, those [soldier] boys will return to find as their reward that their ballot is worth just one-half as much as when they went away.” But the antis proved to be nothing more than fair-weather friends to the soldiers and their ballots.

After using the 1918 Flu pandemic as an excuse to prevent suffrage talks and a failed attempt to keep the suffrage amendment off the ballot on a technicality, anti-suffrage politicians came up with a fairly ingenious idea. State Election Board Chairman McAlester and the Election Board printed the suffrage amendment on a separate ballot to be sent alongside the original ballots to the polls, but they only printed half the number needed. Half of Oklahoma voters would not receive a ballot containing the amendment and would be counted as voting “no” on suffrage because of the silent vote clause. Local election officials learned of the discrepancy and printed the needed ballots, but, not to be outwitted entirely, McAlester and the Election Board had ballots purposely printed without the amendments sent to military training bases in Oklahoma. In doing so, they effectively voted “no” on behalf of every serviceman in the state- all 4,197 of them. Parties willing to disfranchise don’t consider military ballots off limits.

Despite these tactics, Oklahomans approved the suffrage amendment, but the Elections Board ordered a recount based on sealed returns, including mutilated and spoiled ballots that would increase the silent votes. When that failed, anti-suffragists filed a formal protest against certification of the referendum, provoking a national response and a torrent of letters and telegrams. Finally, on November 14th Governor Williams admitted the suffrage amendment had passed, though the Elections Board still refused to certify the election. Voter turnout and national outrage had secured the results.

Oklahoma’s neighbor to the south offers another example of soldier disfranchisement. Texas completely disfranchised military personnel for the length of their service thru 1954, and they did so by accident. In its original 1845 constitution, Texas wanted to restrict military service in the state from making one eligible to vote. Instead, the poorly phrased clausethey used disfranchised all servicemen (and later women) in the state for the length of their service. There is nothing sacred about the military vote in American history.

Texas enacted the poll tax in 1902 to bar Black and poor white voters, but veteran disfranchisement was an unintended consequence of the law. The poll tax had to be paid each year by February 1st; paying it after that deadline still left a voter disfranchised. At the conclusion of WWI, military personnel who were discharged and returned to the state after February 1, 1919 remained disfranchised for the year.

Disfranchising efforts often have unintended consequences. Texas politicians were not concerned, until the war ended shortly before a May 1919 referendum on a state woman suffrage amendment requiring voters to be citizens. Seeking voters to help their cause, politicians passed a law allowing returning soldiers to vote on their discharge papers. However, they didn’t have the votes to enact it without a waiting period, meaning it wouldn’t go into effect until after the May election. In what became a public relations nightmare, moderate reformer Governor Hobby vetoed the soldier-voting billafter the state Attorney General advised that it was unconstitutional. Furious wounded soldiers at Fort Sam Houston refused to participate with Governor Hobby in a scheduled parade to advertise the Liberty Loan. In the end, the soldiers reluctantly participated, using the phrase “in spite of any Texas governor” as their slogan.

Adding to the chaos, a curious set of editorials by conservative judges began to appear arguing that the poll tax was never intended to bar veterans from voting. The editorials, encouraging what was, if not illegal, then certainly extralegal voting, convinced progressive groups to lobby for a new soldier-voting bill. Texas suffrage leader Minnie Fisher Cunningham privately admitted that she feared the editorials were intended to ensure lax enforcement of election laws in preparation for bringing Mexican President “Carranza’s Army” into South Texas to illegally vote against suffrage. Acting primarily out of fear that voter fraud would be used against them and in response to public outcry, rather than a concern for returning soldiers, Governor Hobby called the legislature into special session. He asked for a bill to enfranchise discharged soldiers, “prevent the slacker or imposter” from dressing as a soldier to illegally vote, and standardize the rules in “each and every county…” The successful bill went into effect less than two weeks before the election.

A party bent on winning by any means necessary will not stop short of disfranchising the military or manipulating their votes. Only massive voter turnout and national pressure forced state officials to accept the Oklahoma election results. Only their own interests and public outcry convinced the Texas legislature to enfranchise WWI veterans. The military vote has not been well-protected historically, and laws and campaigns intended to disfranchise one group can easily disfranchise others or trigger reactions that those in power never anticipated.

And lest we assume that manipulating military votes is a phenomenon of the distant past, take the case of Val Verde, Texas. In 1997, when 800 military absentee votes combined with low voter turnout secured narrow Republican victories over two incumbent Latinos, Democrats accused Republican strategists of recruiting military voters, some of whom hadn’t resided in Val Verde in decades. Republicans accused Democrats of wanting to disfranchise the military. As many of the military voters hadn’t lived in the area for years, they were likely unaware that one of the Republican candidates, whom they helped elect in a majority-Latino county, was a former leader in the Ku Klux Klan. The larger story over Texas’s lack of residency requirements for military absentee ballots and possibly manipulating military voters themselves never gained traction, though one of the candidates was forced to decline his seat when photos of him in Klan regalia were made public.

While appeals to conscience alone won’t stop parties bent on manipulating or denying ballots, including military ballots, mass voter turnout and public outrage have proven effective. Americans have already taken care of the former turning out in numbers heretofore unheard of during early voting. Now we must keep a watchful eye on efforts to throw out or manipulate those ballots, and when needed, let our voices be heard once again.