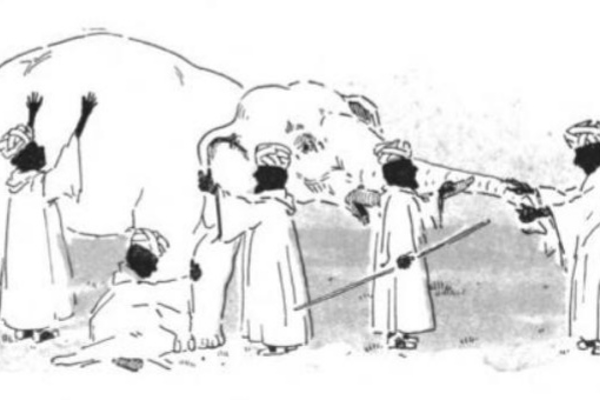 The fable of the blind men and the elephant is one that speaks to historians' sense of humility in the face of complexity and need to consider other points of view.

It is unclear if Donald Trump grasps this lesson.

It is no secret that most historians dislike President Trump. In December of 2019, more than 2,000 of us signed a petition calling for his impeachment. In June, historian Sean Wilentz wrote “that he is without question the worst president in American history.” Most other historians rank him at least among the worst.

Many of the reasons for this judgment we hold in common with other citizens--his narcissism and other unappealing character traits, his handling of the coronavirus pandemic, etc., etc., etc. But we also dislike him because he violates so many of the values important to us as historians. Here I’ll identify and explain our appreciation and his violation of just five of these values: 1) respect for truth; 2) respect for science, reason, and facts; 3) the valuing of history; 4) a realization of the complexity of life and history; and 5) an appreciation of empathy.

In a recent HNN op-ed I quoted from Jill Lepore’s These Truths: A History of the United States (2019): “The work of the historian” includes being “the teller of truth.” And I added my own conviction that “Tell the truth” should be as central to historians as “First, do no harm” is to doctors and nurses. My article also quoted Donald Trump and His Assault on Truth: The President's Falsehoods, Misleading Claims and Flat-Out Lies (2020): “Donald Trump, the most mendacious president in U.S. history . . . . [is] not known for one big lie—just a constant stream of exaggerated, invented, boastful, purposely outrageous, spiteful, inconsistent, dubious and false claims.”

Trump’s lack of respect for truth is related to his lack of respect for science, reason, and facts. The historian H. Stuart Hughes entitled one of his books History as Art and as Science, and he was correct. It is both. We historians share with natural and social scientists a commitment to the scientific method, which means trying to view evidence in as unbiased a fashion as possible and drawing conclusions that approximate truth as closely as we are capable. In his The Modern Mind: An Intellectual History of the 20th Century (2001), Peter Watson praised science for having “no real agenda” and for being open, tolerant, objective, and realizing its results were cumulative, one discovery building upon others. Such an approach also suggests humility by recognizing the limits of the truths we discover.

We historians are like the characters in the Buddhist tale of the elephant and the blind men. Each blind man feels only one part of the elephant--e.g., a tusk, a trunk, or a tail. In Ethics and the Quest for Wisdom Robert Kane relates this story to make the point “that the whole or final truth is not something finite creatures can possess entirely. What they can do is partake of or participate in that truth from limited points of view." What Kane says about truth is also true of history--each historian presents only a limited point of view.

Five years ago on this site I suggested that the quote “history is the error we are forever correcting” could more accurately be rendered “history is the inadequate portrayal of the past we are forever correcting.” Further, I indicated that “this helps explain why there will always be revisionist interpretations.” Valuing the scientific method, we do not see our historical works as the final words on any subject, but merely honest, impermanent efforts to portray some slice of history.

But Trump has no respect for science. Before becoming president, he tweeted that “global warming is an expensive hoax.” And in the present coronavirus pandemic he has often ignored the best advice of scientists, for example in regard to wearing masks, easing government restrictions, and by his hyping of the drug Hydroxychloroquine. Thanks largely to his influence, many of his followers ignore the best scientific advice regarding social-distancing and mask-wearing.

Given his lack of respect for science, his failure to value history (our third professional reason for faulting him) should come as no surprise. Early in Trump’s presidency David Blight, author of the acclaimed Frederick Douglass: Prophet of Freedom (2018), wrote “Trump and History: Ignorance and Denial.” The article summed up nicely why a distinguished historian found Trump’s “5th grade understanding of history or worse” so “deeply disturbing.” “Perhaps,” Blight speculated, Trump’s “grasp of American history rather reflects his essential personality, which seems to be some combination of utter self-absorption, a lack of empathy, and a need to believe in or rely upon hyper individualism.”

In the three years that have passed since Blight’s article, several books like A Very Stable Genius by Philip Rucker and Carol Leonnig, and The Room Where It Happened, by John Bolton, have added new examples of Trump’s ignorance of history--e.g. not knowing that India and China shared a border or that the United Kingdom was a nuclear power (as it had been for over a half century). But Blight’s article retains its relevance for why presidential historical ignorance is so appalling to historians.

A fourth Trump failure from a historian’s perspective is his failure to acknowledge the complexity of life and history. On a recent PBS Newshour discussing the tearing down of statues, some African Americans stated that the Washington, D.C. Emancipation Memorial of Lincoln standing above a kneeling newly freed slave should be torn down because it depicts a black man kneeling in a subservient position. But historian Lonnie Bunch, founding director of the National Museum of African American History and Culture, said it would perhaps be better to add “another statue next to it of Frederick Douglass, for example, creating, in a sense, more history.”

In general, Bunch said he wanted to see “a reasoned process that allows us to discuss, that allows us to bring history before we make decisions of pulling things down.” By adding the Douglass statue, Bunch thinks the revised memorial would provide more complexity and nuance, which is what he believes history should do.

Newshour interviewer Jeffrey Brown commented, “That may be a lot to ask in an America so greatly divided, seemingly not in a mood for complexity and nuance, now fighting over its past and future one statue at a time.”

A lot to ask? Yes, indeed. We historians often feel compelled to reject simplistic casual explanations by saying, “Well, the matter is more complex than that.” For Bunch is right--history teaches us that the reasons things occur are usually complex and nuanced--but people often prefer, especially in our polarized political arena rife with conspiracy theories, more simplistic accounts.

In his The Historian’s Craft, Marc Bloch wrote what we historians know well--“the fetish of a single cause,” is often “insidious.” In Historians’ Fallacies, David Hackett Fischer dealt with this insidious error under the category of “the reductive fallacy, which “reduces complexity to simplicity.”

Such reduction, such over-simplification, and even that often untrue, is typical of Trump’s style. New York Times columnist Thomas Edsall recently cited several studies that indicate “Donald Trump has the most basic, most simplistically constructed, least diverse vocabulary of any president in the last 90 years.” Edsall places Trump among “authoritarians [who] are averse to diversity and complexity.”

The fifth (and final) Trump failure to be highlighted here is something Blight mentioned above, Trump’s “lack of empathy.” Over four years ago my “Historians Need to Write and Teach with Empathy” appeared on HNN. In it I supported the article’s main point with quotes from various historians such as John Lewis Gaddis, and also furnished a link to a piece by then-editor Rick Shenkman that explained empathy. About a year ago I contrasted President Obama’s emphasis on empathy with Trump’s egoism, which completely submerged “any signs of empathy.

The five reasons provided above are not meant to be exhaustive. No doubt other historians can think of additional ones for our collective antipathy toward the man Wilentz labels “the worst president in American history.” I look forward to reading them.