The Error Historians Are Forever Correcting

Walter G. Moss is a professor emeritus of history at Eastern Michigan University and Contributing Editor of HNN. For a list of his recent books and online publications, click here. His most recent book is An Age of Progress? Clashing Twentieth-Century Global Forces (Anthem Press, 2008).

In Anthony Marra’s excellent story “The Leopard,” in his The Tsar of Love and Techno (2015), there is the intriguing line “History is the error we are forever correcting.” The story is set in 1937 Leningrad, but the sentence hints at a great terse explanation of an essential element of history generally. Only, I would express it this way, “History is the inadequate portrayal of the past we are forever correcting.” 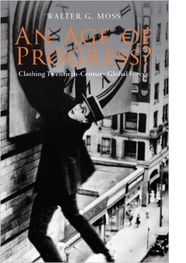 No historical work can state the full truth of its subject. We historians can always more accurately portray the past. This helps explain why there will always be revisionist interpretations. New primary sources emerge. Previously neglected groups like women and minorities require treatment. New perspectives provide new truths. A few recent articles from HNN illustrate this well. Steve Usdin’s “We’ve Just Learned the Origins of Illegal Surveillance in the United States Go Back to the 1930s” relies on “Top Secret” transcripts just released this year. Antoinette Burton, who has authored works on women in history as well as the British Empire and other subjects, writes in “The Wrong Way to Think About Imperial Empires” that a different perspective than the rise-and-fall narrative is needed. And Roger Daniels in his “Surprises in a New Account of FDR” sums up what his new biography has to say that is different from previous historical works about a leader who already has been treated so exhaustively.

Because of revisionist treatments of such rulers as Ivan the Terrible and Catherine the Great and new scholarship on topics like Russian women, material culture, and the everyday life of the people, my own decade-old revision of A History of Russia, 2 vols. (here and here), was able to present a truer (more complete) picture of the Russian past than did most previous histories of that country. But every year, new truths about the Russian past emerge. Thus, future histories will be able to present a truer picture of Russia’s past than I was.

A few weeks ago on the HNN site, historical novelist Jane Smiley was critical of historian Niall Ferguson for insisting that “the historical novel is all made up, but that historical non-fiction, written by historians is truth.” She also mentions Tolstoy’s War and Peace and the historical fiction of Hilary Mantel, both of which I had reflected upon at greater length, also in an HNN piece. But Smiley’s comparison and contrast between her work and that of Ferguson reminded me most of a similar analysis by Tolstoy between his writings and those of the greatest Russian historian of his day, Sergei Soloviev, who before his death would complete 29 volumes of the History of Russia from Ancient Times.

Tolstoy believed that only an artist, like himself, could present historical life as it really was. Soloviev, he thought, dealt not with the real texture of history, but with governments and pseudo-scientific, abstract historical laws, such as the law of progress.

After finishing War and Peace, Tolstoy sketched out some ideas for a never-completed novel that would deal with the age of Peter the Great. For background he read Soloviev’s volumes on that period, but concluded that the historian had overemphasized the positive role of Peter and had neglected the people’s life, those who “made the brocades, broadcloth, clothes, and damask cloth which the tsars and nobles flaunted, who trapped the black foxes and sables that were given to ambassadors, who mined the gold and iron, who raised the horses, cattle, and sheep, who constructed the houses, palaces, and churches, and who transported goods.” Whereas Soloviev criticized the Cossacks of the seventeenth century for what he considered their anti-government, anti-peasant, destructive activities, Tolstoy praised them.

Tolstoy also criticized Soloviev’s emphasis on the “great men” of history (like Peter) and for not realizing that the causes of historical events were so multiple that historians could never discover them all. Although the novelist’s criticism of the historian was not fully justified, it contained some truths.

In his book Ethics and the Quest for Wisdom Robert Kane relates the old story of the blind men and the elephant, where each of the men define the elephant differently depending on which part of it they touched. Kane then states that “one need not thereby conclude that the real elephant is some unknowable thing-in-itself. It may be what is correctly described (if only partially) by each of the blind men and by others from other perspectives. Each goes wrong only in claiming to have the whole truth about it.”

We historians are like the blind men. At best, we each grasp part of the truth about the past. New books about World War I, for example, will continue to appear, even ones dealing with the more limited topic of the causes of that war. Because as limited as the topic is, the causes (not just the main ones) are almost limitless. I used to tell students that any history textbook by its very nature simplified a tremendously complex reality. And simplification meant that many nuances and subtleties were missed. Plus, reality involves not just facts and cognitive understanding but also people’s emotional responses, which historians have more trouble conveying.

These reflections on history have led to the realization that my views on history are similar to those of a group of pragmatic historians described by James Kloppenberg when he wrote in his Pragmatism and the Practice of History (2004) of those who “have been unself-conscious or unwitting pragmatists, embodying in their scholarship the idea that all knowledge is provisional and the idea that all propositions should be tested by a community of inquiry.”

In a variety of other works, Kloppenberg has also discussed pragmatism and historians, especially as it applies to intellectual history. Although in graduate school I studied that type of history and wrote my dissertation on the polemics of Russian philosopher Vladimir Soloviev and those I labeled “Russophiles,” I had little formal training relating to U.S. intellectual history and all the historians whom Kloppenberg refers to in the above 2004 essay. Many of them were influenced by, or at least responded to the impact of, such American pragmatists as William James and John Dewey.

Only in recent years have I come to appreciate the ideas of William James and realize, like Kloppenberg has for much longer, that much of the philosopher’s approach is well-suited to historical thinking. (See here for Kloppenberg’s a recent appreciation of James and his influence.)

In an essay on James three years ago, I mentioned some of his appealing qualities, but not how appropriate they were for historians. They included truth-seeking, openness, tolerance, and humility, but also a strong empathy for suffering people that made him sympathetic with poor workers and critical of imperialism and unnecessary warfare; an appreciation for both the scientific method and the fact that the scientific, rational approach to reality is not the only path to truth; and an awareness of the importance of academics communicating with the general public, of scholars aiding society to better confront present and future problems.

In his many works on pragmatism and history, Kloppenberg has attempted to maintain the same openness to new ideas and developments that James displayed in his psychological and philosophical writings. Although praising the philosopher, the historian has not ignored later justified criticisms of his work. And the type of pragmatic historical approach I am championing here does not advocate any dogmatic pragmatism (an oxymoron?), any rigid adherence to the ideas of James or any other thinker.

In his essay “On a Certain Blindness in Human Beings” James wrote: “Our judgments concerning the worth of things, big or little, depend on the feelings the things arouse in us. . . . Now the blindness in human beings, of which this discourse will treat, is the blindness with which we all are afflicted in regard to the feelings of creatures and people different from ourselves. . . . Neither the whole of truth nor the whole of good is revealed to any single observer, although each observer gains a partial superiority of insight from the peculiar position in which he stands.”

In an appreciation of James soon after his death, journalist Walter Lippmann referred to the philosopher as “perhaps the most tolerant man of our generation.” In his Consciousness and Society, which deals with European social thought from 1890 to 1930, historian H. Stuart Hughes wrote: “After the turn of the century the influence of William James began its triumphant progress. I doubt whether ever before or since an American thinker has enjoyed such prestige on the European Continent.” Now, more than a century after James’s death, we historians could once again profit from reflecting on his approach to reality and truth.