Alan Singer is a teacher educator and historian at Hofstra University, Hempstead, New York and author of New York and Slavery: Time to Teach the Truth (SUNY Press, 2008) and New York’s Grand Emancipation Jubilee (SUNY Press, 2018). This is the first part in a series of posts on Constitutional Textualism with a focus on the 14th Amendment. Follow him on twitter at https://twitter.com/AlanJSinger1. 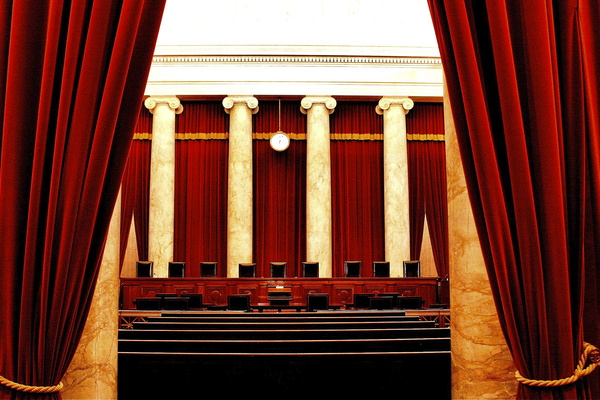 Posting on History News Network, Elliott Young, professor of History at Lewis & Clark College, examined the recent Supreme Court decision in Department of Homeland Security v. Thuraissigiam (2020). Young described the decision as a “fundamental threat to equal protection of the law for all undocumented immigrants” that defied long established legal principles. I strongly support Young’s arguments and, in this article, I wish to extend them. Equally distressing is that it was a seven-to-two majority decision with Ruth Bader Ginsburg and Stephen Breyer joining the rightwing court bloc. Sonia Sotomayor and Elena Kagan posted a powerful joint dissent.

The 1996 Illegal Immigration Reform and Immigrant Responsibility Act “placed restrictions on the ability of asylum seekers to obtain review under the federal habeas statute.” In this case, Vijayakumar Thuraissigiam, an undocumented immigrant from Sri Lanka applying for refugee status because as a Tamil he faced beatings, torture, and death, claimed that since he had already entered the territory of the United States, he was entitled to due process. Thuraissigiam was represented by the American Civil Liberties Union (ACLU). The Court upheld the constitutionality of the 1996 law and ruled that he was not.

The majority decision for the rightwing bloc was written by Samuel Alito. Alito argued “Respondent’s Suspension Clause argument fails because it would extend the writ of habeas corpus far beyond its scope ‘when the Constitution was drafted and ratified’” and that the “respondent’s use of the writ would have been unrecognizable at that time.” Not once did Alito reference the 14th Amendment to the United States Constitution. Breyer and Ginsburg, in a concurring opinion written by Breyer, stated that they supported the court majority “in this particular case,” but not the broader assertions made by Alito.

In a dissent endorsed by Kagan, Sotomayor wrote that “The majority declares that the Executive Branch’s denial of asylum claims in expedited removal proceedings shall be functionally unreviewable through the writ of habeas corpus, no matter whether the denial is arbitrary or irrational or contrary to governing law. That determination flouts over a century of this Court’s practice.” She argued “Taken to its extreme, a rule conditioning due process rights on lawful entry would permit Congress to constitutionally eliminate all procedural protections for any noncitizen the Government deems unlawfully admitted and summarily deport them no matter how many decades they have lived here, how settled and integrated they are in their communities, or how many members of their family are U. S. citizens or residents.” If Sotomayor is correct, and I believe she is, the Thuraissigiam decision puts all DACA (Deferred Action for Childhood Arrivals) recipients at immediate risk.

I’m not a big fan of the national Common Core Standards and its high-stakes standardized reading tests, but as a historian and social studies teacher, I like the idea that they promote close reading of text. Former Associate Supreme Court Justice Anton Scalia, the halcyon of judicial conservatism and the patron saint of the Supreme Court’s dominant bloc, justified his rightwing jurisprudence by claiming to be a textualist. According to Scalia, “If you are a textualist, you don't care about the intent, and I don't care if the framers of the Constitution had some secret meaning in mind when they adopted its words. I take the words as they were promulgated to the people of the United States, and what is the fairly understood meaning of those words.”

But, as Shakespeare reminded us in Hamlet’s famous “To be, or not to be” soliloquy, “There’s the rub.” There is always “the rub.” The problem, with both Common Core and Constitutional textualism is that words have different meanings at different times and to different people and sometimes words are chosen, not to convey meaning, but to obscure it. Understanding “words” requires historical context.

The word slavery did not appear in the United States Constitution until slavery was banned in 1865 by the Thirteenth Amendment because the Constitution, as originally written, represented a series of compromises and contradictions that the authors left to be decided in the future. It was a decision that three score and fourteen years later led to the American Civil War.

I read text pretty well. As persons, enslaved Africans should have been included in the people of the United States who wrote the Constitution “in Order to form a more perfect Union, establish Justice, insure domestic Tranquility, provide for the common defense, promote the general Welfare, and secure the Blessings of Liberty to ourselves and our Posterity, do ordain and establish this Constitution for the United States of America.”

But of course, they weren’t. Just reading the Constitutional text, without context, does not help us understand what Scalia called “the fairly understood meaning of those words.”

Unfortunately for the nation, political bias blinded Scalia while he was on the Supreme Court and blinds the rightwing cabal that dominates the Court today so badly that they just don’t read with any level of understanding and ignore historical documents. Because of this, one of the most pressing issues in the 2020 Presidential election is the appointment of future Supreme Court Justices who can read text with understanding, especially the 14th Amendment to the United States Constitution, and are willing to search for supporting historical evidence.