SCOTUS's Thuraissigiam Decision is a Threat to all Undocumented Immigrants

Elliott Young is a professor of History at Lewis & Clark College and the author of a forthcoming book Forever Prisoners: How the United States Made the Largest Immigrant Detention System in the World (Oxford University Press). 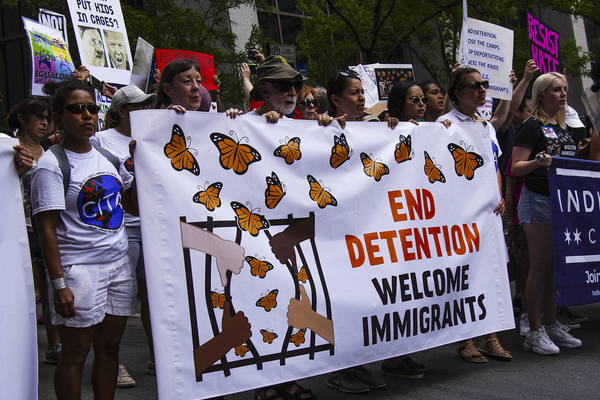 The Supreme Court just made it a lot harder for asylum seekers, but its June 25 decision in Department of Homeland Security v. Thuraissigiam  also poses a fundamental threat to equal protection of the law for all undocumented immigrants. The complex legal arguments about habeas corpus and the plenary power doctrine all boil down to the opinion’s basic point: immigrants are not protected by the Constitution unless they have been legally admitted to the country.  This stark declaration threatens to overturn decades of court decisions and the Constitution itself.

The Vijayakumar Thuraissigiam case revolves around the issue of whether a Sri Lankan man who crossed the border without authorization and was detained 25 feet inside the United States should be considered to be within the territory of the United States or still on the threshold of the country. In a 7-2 decision, the Court decided that Thuraissigiam should be imagined to be outside of the country and therefore not have 5th and 14th Amendment due process protections that would allow him to challenge his detention in court.  However, in her dissent Justice Sotomayor points to a long-list of cases stretching back to the late nineteenth-century that affirm the right to judicial review in deportation cases when constitutional rights are at issue.

Even though the Thuraissigiam case revolved around the constitutionality of the expedited removal process written into the 1996 Illegal Immigration Reform and Immigrant Responsibility Act (IIRIRA), the “entry fiction,” as it is known in the legal world, has actually been part of jurisprudence since the early twentieth century when the Court made a distinction in Yamataya v. Fisher between noncitizens who were arriving to the country versus those already inside the United States, affirming that those within the country had due process protections.

The entry fiction was reaffirmed in 1953 in another case when a permanent resident of the United States, Ignatz Mezei, returned from Hungary and was excluded at the border and held at Ellis Island pending deportation. In this case, the Court held that even though Mezei was being held at Ellis Island, he was not entitled to due process because he had technically not entered the country. As a result, Mezei could be held indefinitely pending deportation without any recourse to the courts to challenge his detention.

The entry fiction and the indefinite detention of asylum seekers surfaced again in the mid-1980s when thousands of Cuban refugees found themselves in indefinite detention because they had committed offenses that made them ineligible for asylum and yet could not be deported to Cuba. Circuit Courts ruled that they had no right to a judicial review of their detention since they had still not been legally admitted to the country.  Even though Mariel refugees had been living inside the United States for several years, some had married American citizens and had US citizen children, the court fancifully imagined them as being still outside US territory.  At a congressional hearing in 1988, an exasperated Representative Robert Kastenmeier declared, “We cannot stick our heads in the sand, hiding behind the legal fiction that the Mariel Cubans are not really here and therefore not due any legal rights.”

For more than one hundred years, the entry fiction has enabled the US government to deny immigrants due process protections that the 14th Amendment clearly indicates apply “to any person within its jurisdiction.” Although Justice Alito seems to restrict the ruling to people who entered the country within the previous 24 hours and within 25 yards of the border, the logic of the decision poses a more ominous threat to all immigrants who were not lawfully admitted.

As Justice Sotomayor writes in her dissent, “Taken to its extreme, a rule conditioning due process rights on lawful entry would permit Congress to constitutionally eliminate all procedural protections for any noncitizen the Government deems unlawfully admitted and summarily deport them no matter how many decades they have lived here, how settled and integrated they are in their communities, or how many members of their family are U. S. citizens or residents.”

It is this threat to more than 10 million immigrants living in the United States without authorization that makes the Thuraissigiam decision such a blow to the basic principles of freedom and justice. It would be odd for a country that imagines itself to be a beacon of hope for people around the world to deny basic constitutional protections to asylum seekers when they finally cross our threshold.