Two Contagions, One Opportunity to Reboot our Approach

Steve Pyne is an emeritus professor and fire historian at Arizona State University and the author of Between Two Fires: A Fire History of Contemporary America and To the Last Smoke, a 9-book series of regional fire surveys. 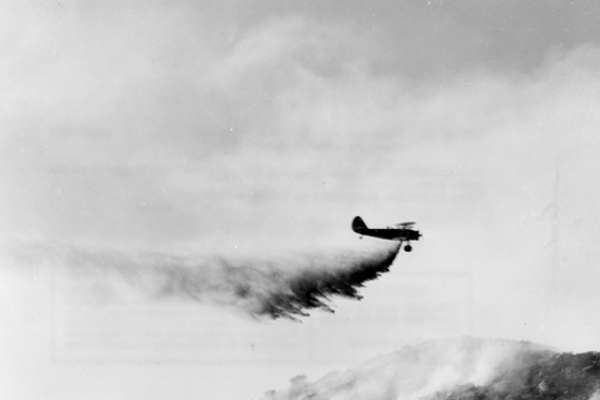 Stearman biplane dropping borate retardant on the 1956 Inaja fire.  After a brief lag, successful air tankers were one of the byproducts of FireStop.

The American West is now experiencing two contagions.  The power of both resides in their power to propagate.  One is ancient, the other recent.  For the old one, fire, there are lots of treatments available but no vaccine possible.  For the new one, COVID-19, treatments are still inchoate; while no vaccine yet exists, producing one is possible.

Unhappily, the two contagions are meeting on the fireline.  Most fires are caught early; only 2-3% escape containment, but these are becoming larger, and that means a massive buildup in response.  The basic pattern crystallized during the Great Fires of 1910 when some 9,500 men worked firelines and most of the standing army in the Pacific Northwest was called out to assist.  What’s curious is that we are dispatching similar numbers of people today.

Why?  The usual expectation is for machinery and knowledge to replace labor.  In wildland fire, however, equipment and know-how just get added to the amalgam, such that today’s fire camps are logistical marvels (or nightmares) and ideal breeding grounds for a pandemic.  This year the established strategy – massing counterforces against big fires – requires rethinking.

One approach follows from the letter of April 3 by the chief of the U.S. Forest Service to double down on initial attack and prevent big fires from breaking out. It treats fires as an ecological riot that must be quickly suppressed.  The evidence is clear that this strategy fails over time, and even considered as a one-year exception (actually the second one-year exception in a decade), it will fail to contain all fires.

Another approach sees the crisis as an opportunity to work remote fires with more knowledge, sharper tools, and fewer people.  The managed wildfire has become a treatment of choice in much of the West removed from towns.  The summer’s crisis is a chance to experiment with novel tactics that do not rely on massed fire crews.  Better, seize the moment to propose a major reconsideration in how people and tools interact.

History holds precedents for resolving many of the big issues confronting landscape fire today.  A problem with powerlines starting lethal fires?  Consider the case of railroads in the 19th and early 20th century that kindled wildfires with abandon, and presently hardly ever do.  Communities burning?  America’s cities and rural settlements burned much like their surrounding countrysides until a century ago; now it takes earthquakes, wars, or riots to kindle most urban conflagrations (what has delayed dealing with contemporary exurbs is that they got misdefined as wildlands with houses, a novel problem, instead of urban enclaves with peculiar landscaping, a familiar one.)  Too many personnel on firelines and in camps, so that managing the people requires as much attention as dealing with the fire?  Consider Operation FireStop. 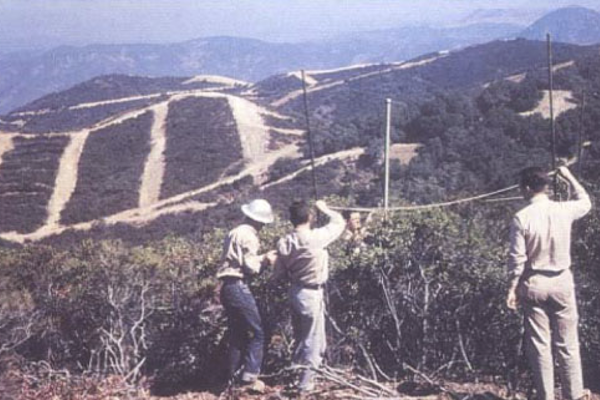 In 1954 the U.S. Forest Service and California Department of Forestry met at Camp Pendleton to conduct a year-long suite of trials aimed at converting the machines and organized science spurred by World War II and the Korean war into materiel and methods suitable for fire control.  Operation FireStop experimented with aircraft, retardants, radios, trucks and tracked vehicles, now war surplus for which the Forest Service had priority access.  FireStop helped announce a cold war on fire.

Out of FireStop came air tankers, borate retardant, helicopters for laying hose, helijumping, models for adapting vehicles – from jeeps to halftracks – for fire pumps and plows.  The newly available hardware catalyzed equipment development centers.  The organization of fire science helped push toward fire research labs.  Some of these activities might have happened anyway.  But FireStop quickened and focused the trends.

We should reboot FireStop, this time with contemporary purposes and gear, to align the revolution in digital technology and the reformation in policy that crystallized 40 years ago.  This time we don’t need to militarize fire management: we need to modernize it in ways that reduce the need for mass call-outs and logistical carnivals, that allow us to use today’s cornucopia of technology to do fire more nimbly, precisely, and with less cost and environmental damage.

Call it Operation Reburn.  Schedule it for two years, one fire season for widespread testing, a second for refining the best outcomes.  It isn’t just new hardware that matters: it’s how that technology interacts with people and tactics.  Presently, for example, drones are being used for reconnaissance and burnouts, but a fully integrated system could transform emergency backfires into something like prescribed fires done under urgent conditions.  The burnouts could proceed at night, do less damage, and demand fewer people.  New tools can encourage new ways of imagining the task to which they are applied.

The two contagions make an odd coupling.  Wearing masks to protect against aerosols is akin to hardening houses against ember storms.  Social distancing resembles defensible space.  Herd immunity looks a lot like boosting the proportion of good fires to help contain the bad ones.

It’s common to liken a plague to a wild fire.  But it’s equally plausible to model fire spread as an epidemic, a contagion of combustion.  Outbursts of megafires resemble emerging diseases because they are typically the outcome of broken biotas – a ruinous interaction between people and nature that unhinges the old checks and balances.  They kindle from the friction of how we inhabit our land.  For now we have to live with COVID-19.  We’ll have to live with fire forever.

An American way of fire came together during the Great Fires of 1910.  Half of America’s fire history since then has sought to remove fire as fully as possible.  The other half has sought to restore the good fires the early era deleted.  Operation FireStop adapted military hardware and a military mindset to support fire’s suppression.  Operation Reburn could enlist more appropriate technology to enhance the policies wildland fire needs today.  Not least, it could scrap the unhelpful war metaphor for more apt analogues drawn from the natural world that sustains fire – and ourselves.