by Bernadette Crehan and Susan Liebell

Susan Liebell combines history and political theory to study the Second Amendment, toleration, and citizenship She is the author of Democracy, Intelligent Design, and Evolution: Science for Citizenship (Routledge, 2013), the co-host of the podcast New Books in Political Science, and an associate professor at Saint Joseph’s University. Bernadette Crehan is a student of political science, history, and international relations, president of Pi Sigma Alpha (the national political science honors society), and a member of the class of 2020 at Saint Joseph’s University. 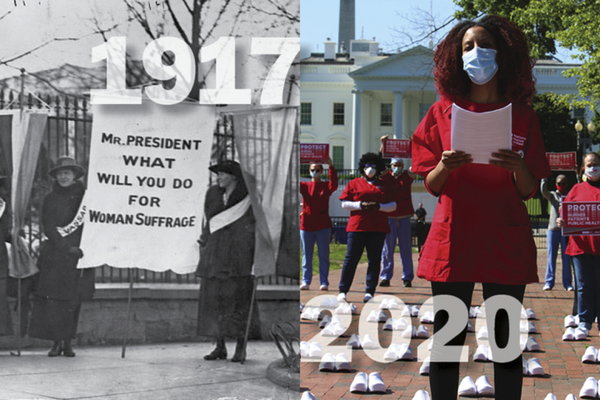 "As such, their silence rang indignant: their banners directly addressed President Wilson, their location directly confronted the president,

and their public demonstration enacted the freedom they sought."

On April 21, 2020, nurses stood in front of the White House and recited the names of colleagues who had died from COVID-19. By standing at 1600 Pennsylvania Avenue, they hoped to bring their demands for more personal protective equipment (PPE) “directly to President Trump’s doorstep.” These powerful images of (mostly women) nurses hoisting signs visually recall the first White House protest— in favor of women’s suffrage. The National Woman’s Party’s fight with President Woodrow Wilson a century ago not only sheds light on the nurses' demonstration and our assumptions about women, patriotism, and protest, but offers possible strategies for the nurses who seek long-term change in healthcare practices.

On June 20, 1917, Lucy Burns, co-founder of the National Woman’s Party (NWP), and Dora Lewis gathered with other suffragists in front of the White House. They held a banner criticizing President Wilson’s opposition to women’s suffrage: “We, the Women of America, tell you that America is not a democracy…. President Wilson is the chief opponent of their national enfranchisement.” Their immediate audience was a visiting Russian delegation -- as well as President Wilson and members of Congress. As the NWP suffragists continued to protest for the 19th Amendment in front of the White House for the next 10 months, they carefully crafted a spectacle. They were silent (and later known as the Silent Sentinels), dressed in the colors of the NWP (purple, white, and gold), and meticulously followed DC’s traffic and assembly ordinances. Their audience was complex and multi-layered: President Wilson and Congress; their own NWP membership; the wider women’s suffrage movement; and the general public. Many, both inside and outside the suffrage movement, labelled the NWP protesters as militant and unpatriotic. Criticism of the Silent Sentinels derived from widely held beliefs about femininity and patriotic duty during wartime—as well as the sanctity of the White House.

A century later, unionized nurses took a page from the suffragists. They gathered at the White House to call attention to the 9,000 health care workers in the United States who have tested positive for COVID-19. A spokesperson from the National Nurses Union (NNU) read the names of 45 deceased nurses and called directly upon President Trump and Congress to mandate that the federal Occupational Safety and Health Administration (OSHA) “issue an emergency temporary standard to protect health care workers and other frontline workers from COVID-19 exposure.” Dressed mostly in red (the color of their union’s logo), the nurses silently held photographs of deceased co-workers -- using the spatial aesthetics of social distancing to create a 21st-century spectacle. A week later, the number of fallen nurses had almost doubled and the NNU returned with eighty pairs of empty, pristine, white shoes. Like the suffragists, the nurses carefully choreographed space, speech, silent body rhetoric, and images to explain their cause and influence lawmakers, but also to signal strength to National Nurses’ Union members.

But such displays have often alienated more mainstream groups. Just as the NWP split from the more mainstream National American Woman Suffrage Association, the NNU split from the American Nursing Association as they sought to “more aggressively fight hospital management for better working conditions for nurses.” After a one-day strike at 34 California hospitals in 2011, the California Hospital Association called the NNU nurses “inappropriate and irresponsible.” Additionally, during the 2014 Ebola epidemic, the NNU highlighted the lack of preparation of hospitals and the condition of the nurses who cared for them and their protests of “subpar” PPE have been called “militant” and “aggressive” by labor historian Nelson Lichtenstein.

Militant or not, the membership of the NNU has grown while other American unions have experienced decline. The Atlantic calls the NNU “one of the smallest, but most powerful unions in the country” and Berkeley’s Harley Shaiken highlights their innovative and bold approach -- which has resulted in policy successes even in right-to-work states. Political Scientist Laura Bucci emphasizes that “This kind of action harkens back to other female-led labor struggles, from workplace conditions in the garment industry to those in America's classrooms where public action is used as a measure to achieve political change outside of bargaining periods.”

The National Women’s Party emphasized their femininity when they believed it would amplify their message and, similarly, the NNU has leaned into the gendered nature of the nursing profession. RoseAnn DeMoro, former executive director, claims that “There's something in the culture of women that’s collective and cohesive....They play for each other and their organization, and the patients in a way that’s in their social structure really [and]..an extension, in some ways, of the family—and I think that’s why it’s devalued by employers.” As a result, nurses are often hindered from combining their militancy with their femininity. Writing before COVID-19, activist and scholar Linda Briskin presciently concluded that nurses’ professional commitment to care often conflicts with their work environments. From “healthcare restructuring, nursing shortages, intensification of work, precarious employment and gendered hierarchies” nurses are increasingly left unable to do their jobs leading to a “militant discourse around the public interest, and a reconstitution and reclamation of ‘caring” that may lead to more strikes.

What lessons might the 1917 National Woman’s Party protest hold for nurses? The Silent Sentinels turned President’s Wilson’s own political communication and strategy against him -- something the NNUs should consider. When he consulted public opinion (the cutting edge for the early 20th-century), the Sentinels rallied the public's support to their cause. Although the suffragists targeted Wilson, he became their greatest potential ally because his “rhetorical presidency facilitated the generation of direct and indirect appeals.” The NNU might likewise interrogate the unique communication style of President Trump. Rather than allow Trump to control the narrative on Twitter and speak to the public through his (until recently) daily press-conferences, could the nurses challenge Trump on his own turf by using spectacle and social media to affect the public's understanding of the PPE shortages?

The suffragists appropriated Wilson’s war ethos to construct themselves into “soldiers joining the fight for democracy." The nurses must likewise consider the tropes and themes of the Trump presidency to keep healthcare reform on the agenda. Their success may depend upon their ability to use spectacle and gender to impact public opinion during a new form of war.