Trump’s Attacks on the WHO Evoke Nostalgia for George W. Bush

Jeffrey J. Matthews, a professor leadership and history at the University of Puget Sound, is the author of the new book Colin Powell: Imperfect Patriot (University of Notre Dame Press). 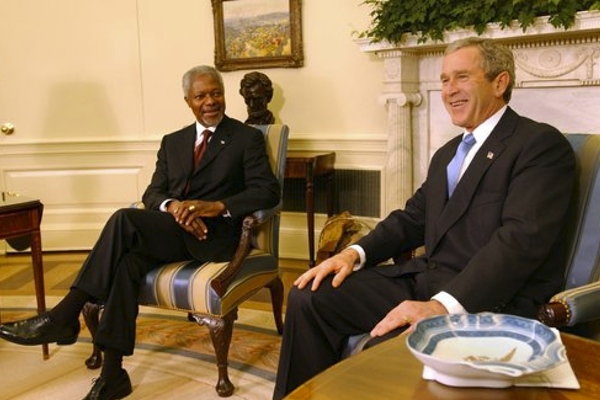 Early in Donald Trump’s unpresidential presidency some Republicans and many Democrats began to confess a longing for the relatively calm, congenial, and predictable presidency of George W. Bush.

In May 2018, conservative author and political commentator S.E. Cupp, wrote: “I know I’ll be called an establishment cuck for this, but after almost a year and a half of Trump’s antics — his tweets, his bullying, his lies, his lack of intellectual curiosity, his brittle inability to withstand scrutiny, his angry, uninformed blurting, his hostility toward valued democratic institutions — it’s hard not to miss Bush.”

In December 2018, Democrat Nancy Pelosi, on the verge of becoming Speaker of the House, both disparaged Trump’s penchant for making false claims and confessed her nostalgia for the former president. While the congresswoman acknowledged her “differences” with Bush, she underscored their “many areas of agreement” and their ability “to work together in respectful ways.” Previously, Pelosi had even blurted on television, “I never thought I’d pray for the day that [Bush was] president again.”

Indeed, despite the fact that the former president left the White House with a dismal approval rating of 34 percent, his favorability has rebounded in recent years, surpassing 50% in 2015 and exceeding 60% in the Trump era.

Unlike Cupp and Pelosi, at the time I felt scant nostalgia for the Bush administration. Say what you will about Trump’s unpresidential behavior, he, unlike Bush, had not charged this country into an unnecessary and catastrophic war that led to the death of more than a half million people, perhaps two million, including 9,000 U.S. military personnel and contractors. Moreover, according to Brown University, nearly one million American veterans of the Iraq and Afghan wars have registered for VA claims.

Recently, however, I admit to having a tinge of nostalgia for Bush in response to President Trump’s ongoing harangues against the World Health Organization and his decision to freeze financial support for the organization during the time of a global pandemic. Given all the trials and tribulations of the Bush administration few people remember one of its signal triumphs: the promotion of international healthcare.

In March 2001, Bush met with Kofi Annan, the Secretary-General of the United Nations, who proposed a new fund to combat HIV/AIDS, malaria, and tuberculosis. Wary of foreign development programs and especially distrustful of the U.N., Bush did not commit himself. However, Colin Powell, his secretary of state, recognized an opportunity for American leadership.

Powell telephoned Tommy Thompson, Bush’s secretary of Health and Human Services, and explained that the HIV/AIDS pandemic was “not just a health matter,” but had implications for global stability and was thus “a national security matter.” With that perspective, he enlisted Thompson’s help in convincing the president that the United States should be the first contributor to Annan’s U.N. fund. It worked.

In his memoirs, Bush admitted that he had been reluctant to support the U.N. project because he viewed the world organization as “cumbersome, bureaucratic, and inefficient.” But Powell and Thompson proved a formidable team. “They felt it would send a good signal for America to be the first contributor,” Bush wrote. “Their persistence overcame my skepticism.”

Powell and Thompson proceeded to co-chair a task force on how best to organize and manage the relief fund. In May 2001, at the White House Rose Garden with Powell, Thompson, Annan, and others, Bush announced a $200 million “founding” commitment to the U.N. Global Fund, and he promised “more to follow as we learn where our support can be most effective.” Annan later wrote of Bush’s “resolute” commitment to “the most important international financing facility for aid established in the last twenty years.”

Bush delivered on his promise, and then some. In 2002 he not only increased America’s commitment to the U.N. Global Fund to $500 million, but also launched a separate U.S. AIDS initiative. Returning to the Rose Garden in June 2002, the president announced “another important and new initiative in the fight against HIV/AIDS,” the International Mother and Child HIV Prevention Initiative, a $500 million program to prevent mother-to-child transmissions. Bush again commended Powell and Thompson for combating a pandemic that “staggers the imagination and shocks the conscience.”

The Bush administration’s leadership continued on the tragic international health crisis. In his January 28, 2003, State of the Union speech, the president announced a massive $15 billion, five-year program to “turn the tide against AIDS in the most afflicted nations of Africa and the Caribbean.” Annan declared this program the single most important foreign policy achievement of the Bush administration.

Five months later, in the Dean Acheson Auditorium at the State Department, Bush signed the United States Leadership against HIV/AIDS, Tuberculosis, and Malaria Act of 2003. He characterized the enormous health program as “a great mission of rescue” in the tradition the Marshall Plan, the Berlin Airlift, and the Peace Corps. Bush credited Powell and Thompson for “their leadership on this crucial issue,” stating that there were “no better people to trust in seeing that the great heart and compassion of America is recognized in our world through accomplishment.”

As President Trump has stated, the United States is now engaged in a major war against the COVID-19 virus, and he is our commander in chief.  In a very short period of time, the country has suffered more than 60,000 deaths and at least 1,000,000 Americans have contracted the virus. It is again time for bold presidential leadership on the world stage. It is again time for a Republican president to support, not disparage, global institutions that can help us save lives and bring about an allied victory.