Edmund G. Ross Was a Profile in Impeachment Corruption, not Courage

David O. Stewart, who defended a Senate impeachment trial in 1989, is the author of Impeached: The Trial of President Andrew Johnson and the Fight for Lincoln’s Legacy. 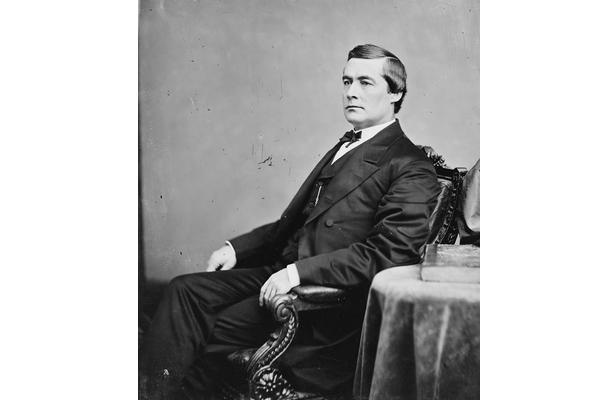 The current impeachment proceedings have revived the historical error of proclaiming Kansas Senator Edmund G. Ross a hero for providing the vote that saved President Andrew Johnson’s job after the April 1868 impeachment trial.

For many years after that one-vote verdict, Ross was proclaimed the savior of the presidency from the rabid forces of impeachment.  More recent studies have noted that the racist Johnson was mostly a blight on the presidency, creating harsh divisions after the Civil War rather than binding up the wounds from that bloody conflict.

But another lingering fiction is that Ross cast his pro-Johnson vote altruistically.  Ross proclaimed his own heroism in his memoir.  When he cast the impeachment vote, he wrote, it was like looking into his open grave, but he courageously leapt in despite the consequences.

Future President John F. Kennedy (or his ghostwriter), revived this myth in his often-inaccurate book Profiles in Courage, pronouncing Ross’s vote “the most heroic act in American history.”

That vote was a profile in corruption, not courage.

Ross, a printer previously accused of bid-rigging on Kansas state contracts, secured his Senate seat because his sponsor – a crook named Perry Fuller – paid Kansas state legislators $42,000 in bribes to select Ross and Samuel Pomeroy to Washington as the state’s senators.

In the 1860s, frontier Kansas had a well-earned reputation for corruption.  Ross replaced a senator who had killed himself after the revelation that he took a $20,000 bribe from (yup) Perry Fuller.

In his first months in Washington, Ross did nothing to attract the attention of even most dedicated Senate-watcher.  When the impeachment crisis erupted in early 1868 and landed in the Senate for Johnson’s trial, Ross flirted with both sides of the contest, then began to offer his vote for the best deal he could get.

Less then two weeks before the trial ended, Ross sent his sponsor, Perry Fuller, to Johnson’s Interior Secretary.  Fuller had already joined with a Treasury official to offer a bribe that would have secured Ross’s vote for Johnson.  Fuller told the Interior Secretary that Ross would vote for acquittal if only Johnson would speed the return to the union of three Southern states. That was outside of Johnson’s power, so no deal was struck.

Days later, Ross promised pro-impeachment senators he would vote their way, a pledge he repeated to a reporter three days before the final vote.  But then, something happened.  On the morning of the vote, Ross breakfasted with his good friend, the ubiquitous Perry Fuller.  Then Ross reversed himself to cast the vote that kept the president in office.

The inference that Ross was bribed to vote for Johnson is powerful, although bribes in 1868 were paid in cash that could not (and cannot) be traced.  But records show that Ross immediately moved to cash in on his pro-Johnson vote with patronage appointments.

At the top of Ross’s shopping list was a top job for – you guessed it – Perry Fuller. The job?  Commissioner of Internal Revenue, a position from which Fuller’s corruption could spread through the nation like a virus.  Johnson promptly nominated Fuller for the pivotal position, but the Senate Finance Committee would not swallow a flat-out crook in that office.  It sent Fuller’s name back to the president.

So Ross set his sights lower.  In August, he secured Fuller’s appointment as Collector of Revenue in the port of New Orleans.  Through seven months in that office, Fuller more than doubled the number of that office’s employees, then was arrested for stealing $3 million.

When Fuller had to post bond for his pretrial release, Senator Edmund Ross of Kansas was happy to guarantee it.

But Fuller was not the only name on Ross’s patronage shopping list.  The Kansan also requested the appointment of a friend as superintendent of Indian lands in which is now Oklahoma, stressing to President Johnson the “large amount of patronage connected with that office.”  Johnson made the appointment.  Then Ross asked for ratification of a treaty with the Osage Tribe, which Johnson swiftly granted.

Even the widespread belief that Ross’s impeachment vote ruined his life is a fable. He did lose his Senate seat to a man who paid $60,000 in bribes to Kansas legislators, a moment of poetic justice.  Ross went on to publish two newspapers in Kansas before landing in 1885 as territorial governor of New Mexico.

Edmund G. Ross a profile in courage?  No. Not ever.