Unlike Obama, Trump Has No Moral Compass 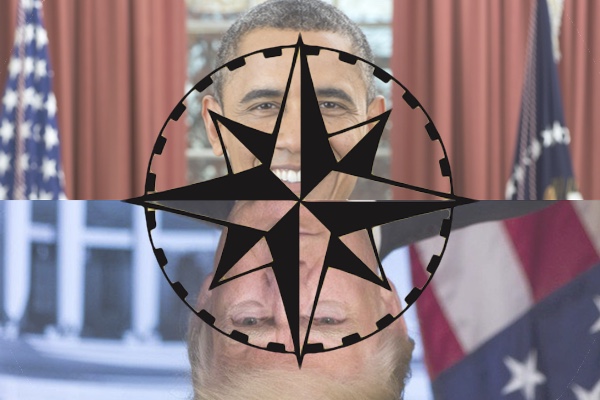 Suggesting that President Trump lacks a “moral compass” is not a new criticism. But this charge requires further exploration. The fault is twofold. The first is a personal failing, the second a societal one. We shall examine both of these dimensions in some detail, but first several paragraphs about the moral compass of President Obama and the values of some of our outstanding previous presidents.

Such a compass is based on proper values. Before being elected to his first presidential term, Obama wrote in The Audacity of Hope,“I think that Democrats are wrong to run away from a debate about values,” and that the question of values should be at “the heart of our politics, the cornerstone of any meaningful debate about budgets and projects, regulations and policies.” He also wrote that empathy “is at the heart of my moral code, and it is how I understand the Golden Rule—not simply as a call to sympathy or charity, but as something more demanding, a call to stand in somebody else's shoes and see through their eyes.”

Besides empathy, Obama often mentioned the importance of such values as “honesty, fairness, humility, kindness, courtesy, and compassion,” as well as wisdom, which implies the ability to prioritize such values in order to best work for the common good. In Small Is Beautiful,E. F. Schumacher compared wisdom to the sun: “All subjects, no matter how specialised, are connected with a centre; they are like rays emanating from a sun.” Scholar Copthorne Macdonald noted in “The Centrality of Wisdom,” “values are at the heart of the matter.” He also wrote, “Wise values express themselves in wise attitudes and wise ways of being and functioning.” Among the wise values he mentions are humility, humor, creativity, love, compassion, empathy, courage, passion, patience, positivity, openness, self-awareness, self-discipline, tolerance, and truth.

After being elected president, Obama often stressed similar values, for example, the Golden Rule of doing “unto others as we would have them do unto us” (Cairo, 2009), tolerance (University of Michigan Commencement Speech, 2010),self-discipline, and empathy.

In stressing values, Obama followed the example of some of our outstanding presidents. George Washington in his Farewell Address of 1796 expressed the belief that it was “substantially true that virtue or morality is a necessary spring of popular government” and hoped that future government actions “be stamped with wisdom and virtue.” As Ron Chernow emphasizes in his Washington: A Life (2010), “Washington in victory [after the battle of Yorktown, 1781] was the picture of humility. In reporting to Congress, he deflected attention from himself.” And later, “It speaks to Washington’s humility that the greatest man of his age was laid to rest in a communal tomb where nobody could single out his grave or honor him separately.” Thomas Jefferson knew that “the wise know their weakness too well to assume infallibility; and he who knows most, knows best how little he knows.” In Lincoln: the Biography of a Writer (2010), Fred Kaplan emphasizes Lincoln’s great appreciation of “wisdom literature” and writers like Shakespeare and the poet Robert Burns. In addition to Lincoln’s compassion, two of the most prominent wisdom qualities were his humility and self-deprecating humor.

In his book on Leadership, presidential scholar and FDR biographer James MacGregor Burns notes that “hierarchies of values . . . undergird the dynamics of leadership.” He also quotes the abolitionist Senator Charles Sumner of Massachusetts who stated that “true politics” was simply “morals applied to public affairs.” In discussing FDR, Burns writes, “It was because Roosevelt’s fundamental values were deeply humane and democratic that he was able, despite his earlier compromises and evasions, to act [against Hitler] when action was imperative.” Such leadership reflects “considerations of purpose or value that may lie beyond calculations of personal advancement.”

Other scholars have noted other values that motivated FDR. Historian Douglas Brinkley, for example, has written of his strong love of nature, and Robert Dallek’s recent biography indicates that in addition to his ample political skills, FDR adhered to a variety of progressive values.

All of this stress on values is not meant to suggest that ethical considerations are always in the forefront of the mentioned presidents’ thinking, but as Burns points out, “Divorced from ethics, leadership is reduced to management and politics to mere technique.” And “the capacity of presidents to transcend their everyday role as bargainers and coalition builders and to confront the overriding moral and social issues facing the country gives rise not only to questions of principle, purpose, and ethics but to considerations of sheer presidential effectiveness.”

But enough about previous presidents. How about Trump’s moral deficiencies, his seeming lack of concern with moral values? The useful biography Trump Revealed: The Definitive Biography of the 45th President, by Washington Post journalists Michael Kranish and Marc Fisher, tells us much about Trump’s morals failings. It mentions his cheating on a wife, admitting to trying to “seduce a married woman,” and bragging about how he could grab women by the crotch—“when you’re a star, they let you do it. You can do anything.” His biographers also point out his lack of any sense of business ethics and comment on his addiction “to publicity and recognition,” his “focus on getting his name onto products, buildings, and news stories.” The authors also indicate that neither in college nor later in his life did Trump evidence any interest in literature, history, philosophy, the arts, or culture, subjects that might have awakened some concern about values.

Trump’s appreciation of religion was mainly of the self-help type as preached by Protestant minister Norman Vincent Peale. Such preaching, in the words of historian Richard Hofstadter, reflected a “confusion of religion and self-advancement.” Trump considered Peale an important mentor, who taught him “to win by thinking only of the best outcomes.” (See here for more on Trump and religion.)

Since becoming president, Trump’s moral impoverishment has become more evident than ever, as demonstrated by a recent New York Times list of his “more egregious transgressions” or Politifact’s reproduction of his “false statements.”

Whereas scholars such as Schumacher and Macdonald(see above) thought that wisdom should coordinate and direct our other values and actions, and Obama stated that values should be at “the heart of our politics,”what directs Trump’s actions is his narcissism. A narcissism that leaves no room for wisdom or other moral values such as humility or empathy. As conservative columnist David Brooks has written of Trump: “He has no . . . capacity to learn. His vast narcissism makes him a closed fortress. He doesn’t know what he doesn’t know and he’s uninterested in finding out.”

Trump’s lack of a moral center certainly reflects his own personal failings, but the fact that we now have such a president also reflects our own societal failure. As a nation, we picked him. How and why did we select such a morally bankrupt person? And what does that selection say about our culture and us as a nation?

Yes, we have had great presidents like Washington, Lincoln, and FDR. And yes we have been a land of opportunity for many. And yes we honor Martin Luther King Jr. on his holiday, and twice elected Barack Obama, the son of a black African and white mother as our previous president.

But we also have a history of slavery, of racism, of killing and subjecting Native Americans, of McCarthyism, of imperialism in places like the Philippines, of overemphasizing the getting and spending of money, and of a fondness for glitzy entertainment.

In 1963 anthropologist Jules Henry declared that the two main “commandments” of our culture were “Create More Desire” and “Thou Shalt Consume.” In 1985, Neil Postman wrote in Amusing Ourselves to Death, “Our politics, religion, news, athletics, education and commerce have been transformed into congenial adjuncts of show business, largely without protest or even much popular notice. The result is that we are a people on the verge of amusing ourselves to death.”

Trump reflects these more negative strains of our national life. Trump Revealed mentions some of Trump’s ethnic prejudice and racism—for example, complaining of “too many Italian and Irish students” while in college. In 1973 the Justice Department filed “one of the most significant racial bias cases of the era” against him and his father for their real estate dealings. It also mentions Trump’s closeness to lawyer Roy Cohn, one of Sen. Joe McCarthy’s chief aides. (Trump’s crassness and frequent anti-intellectual outbursts remind us of McCarthy.)

Shortly after Trump’s election in late 2016, I wrote of “the pursuit of monetary gain and pleasure which is often linked with our capitalism and consumer culture,” and added that “if you were pressed to name one individual who most personifies” that spirit, it would be Trump.He also reflects Postman’s fear that “our politics, religion, news . . . have been transformed into congenial adjuncts of show business.” Our fondness for glitzy entertainment has helped produce an entertainer-in-chief rather than an honorable and decent president.

Trump is fond of the rags-to-riches American myth of “Algerism” (after the novels of Horatio Alger who depicted it), which historian Christopher Lasch called “the dominant ideology of American politics” during the late-nineteenth-century’s Gilded Age. (Lasch added: “Failure to advance, according to the [Alger] mythology of opportunity, argues moral incapacity on the part of individuals or, in a version even more implausible, on the part of disadvantaged ethnic and racial minorities.”) Trump’s simplistic view of societies “winners” and “losers” has been strongly affected by this myth.

Trump’s America is like that of his business interests, a land of real estate wheeling and dealing, of casinos, of beauty pageants, of pro wrestling, of reality TV (like his The Apprentice or the earlier show on which he appeared, Lifestyles of the Rich and Famous). It is an America that has bestowed fame on big-mouth media personalities like talk-radio’s Rush Limbaugh and Fox’s Bill O’Reilly.

Trump’s America is also one with little respect for scientific or other truth (consider all the falsehoods spewed by Trump and his EPA). Moreover, in its unfettering of restraints meant to protect average Americans from greed and environmental damage, it harkens back to the Gilded Age, a time before twentieth century Progressivism attempted to constrain and supplement capitalism so that our government and laws paid more attention to the public good.

If we are ever to rid ourselves of Trumpism and whatever noxious odors it leaves behind, we need not only a more honorable president, but an emphasis on more honorable values such as wisdom, humility, compassion, empathy, tolerance, and truth. We need to cherish them in our education, in our culture, and in our politics. Only then can we dream of making America great.