The Crassness and Anti-Intellectualism of President Donald Trump 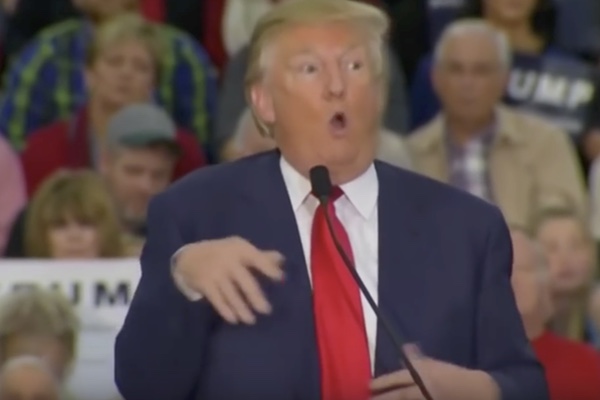 What word best describes Donald Trump? Almost two years ago, I wrote “The Main Problem with Donald Trump: He's a Fool.” And I continue to think a fool he certainly is. But that word does not quite get to his essence. After the revelation in October 2016 of Trump’s comments in 2005 about how he could “do anything” he wanted with women, including grabbing them “by the pussy,” a more apt word should have occurred to me, but didn’t. Now it does: crass.

The Merriam-Webster dictionary defines crass as 1) having or indicating such grossness of mind as precludes delicacy and discrimination, and 2) guided by or indicative of base or materialistic values. The Oxford Dictionaries indicate that it means “showing no intelligence or sensitivity.” Dictionary.com adds, “without refinement, delicacy, or sensitivity; gross; obtuse; stupid.”

Having identified crassness as Trump’s trademark characteristic, we next turn to the historical question of what exists in the American character and culture that would make such a crass man appealing to enough Americans so that he ends up being our president.

Historian Richard Hofstadter’s Anti-Intellectualism in American Life (1962) offers us some clues because Trump’s crassness appeals to the anti-intellectual strain in American culture. In many ways Trump epitomizes this aspect. His global-warming denials and appointments of so many second-class minds like that of Energy secretary Rick Perry, who insists that “the science is still out” on climate change, are just two indications of Trump’s attack on rationality. As conservative columnist David Brooks has written of Trump, “He has no . . . capacity to learn. His vast narcissism makes him a closed fortress. He doesn’t know what he doesn’t know and he’s uninterested in finding out.”

It is not coincidental that Trump’s popularity has been greatest among whites who are poorly educated, older, religiously evangelical, or from rural areas and small towns. Anti-intellectualism, as Hofstadter noted at some length regarding evangelicals, was more common among these groups than among most other religious believers and non-believers, younger voters, and big-city residents. And let’s not forget Trump’s backing by Fox News, whose two most prominent personalities were its founder Roger Ailes (who advised the Trump campaign) and Bill O’Reilly. Both men trafficked in anti-intellectualism and ultimately left Fox News amidst accusations of sexual harassment.

Whereas many Trump critics think him too crude, coarse, and vulgar, many of his admirers interpret his language as being down-to-earth and contemptuous of political correctness. To their minds he is a “straight shooter who speaks frank truths. He is the opposite of the intellectual or “egghead.”

Hofstadter quoted one right-wing novelist as defining egghead as “a person of spurious intellectual pretensions, often a professor or the protégé of a professor. Fundamentally superficial. Over-emotional and feminine in reactions to any problem.”

The historian acknowledged that many of America’s Founding Fathers were intellectuals—“sages, scientists, men of broad cultivation, many of them apt in classical learning, who used their wide reading in history, politics, and law to solve the exigent problems of their time”—but the election of Andrew Jackson in the early nineteenth century signaled an important change. In his chapter “The Decline of the Gentleman,” Hofstadter wrote that “the first truly powerful and widespread impulse to anti-intellectualism in American politics was, in fact, given by the Jacksonian movement." (Various sources have noted Trump’s great admiration for Jackson, but also indicated it is based on a very limited understanding of Jackson’s populist appeal.)

It was during Jackson’s second presidential term that Alex de Tocqueville’s first volume of his famed depiction of America (Democracy in America) appeared. As one book of the Frenchman’s letters states, the “spirit of [American] self-interest appears crass to Tocqueville's aristocratic mind, and he suggests that Americans judge the value of anything only by asking, ‘How much money will it bring in?’”

Following the Civil War, American crassness was satirized in The Gilded Age (1873), a novel co-written by Mark Twain and Charles Dudley Warner. It was a popular success, and some historians have applied the term to the whole period from the 1870s into the 1890s. Various historians have stated that it was “the crassness and materialism of the period,” the “relentless tawdriness and vulgarity" that earned it the label. Similarly, as mentioned elsewhere, “Ersatz, kitsch, ostentatious, vulgar, poor taste”—Trumpian could be a synonym for any of them.

At the end of the nineteenth century, one of America’s best known writers was Henry James. Many of his novels and stories contrasted Americans and Europeans. Commenting on his stories collected in The Better Sort (1903), Ian Bell wrote, “they add up to a panorama of the vulgarity and commercialism of the age, in which innocence, sensitivity, and intelligence inevitably suffer, in which . . . everyone and everything are sold. . . . These stories are full of sensitive gentlemen and women who reluctantly serve, exist by serving, a crass civilization, who are themselves commodities or produce commodities.” (James’s brother, the philosopher William James, wrote of the U.S. “moral flabbiness born of the exclusive worship of the bitch-goddess SUCCESS. That—with the squalid cash interpretation put on the word success—is our national disease.”)

In considering the twentieth century (up to the 1960s), Hofstadter devotes one chapter of his anti-intellectualism book to “Self-Help and Spiritual Technology.” In it he comments on three subjects that are especially relevant to the development of Donald Trump: the popularity of the rags-to-riches myth, the increasing emphasis on vocational training, and the popularity of self-help gurus like Norman Vincent Peale.

In a review of the biography Trump Revealed, I indicated Trump’s fondness for the rags-to-riches myth or “Algerism” (after novels of Horatio Alger who depicted it) as it applied to his paternal grandfather (a German immigrant) and father. Historian Christopher Lasch has called that myth “the dominant ideology of American politics” during the Gilded Age. He adds, “Failure to advance, according to the [Alger] mythology of opportunity, argues moral incapacity on the part of individuals or, in a version even more implausible, on the part of disadvantaged ethnic and racial minorities.” Trump’s simplistic view of societies “winners” and “losers” has been strongly affected by this myth.

Hofstadter states that the so-called “self-made” man’s “success does not depend on formal education” and that “personal culture” is unimportant to him. The historian also notes that the Wharton School at the University of Pennsylvania (founded in 1881) was the first of our nation’s business schools. And he cites a source that suggests that business schools like Wharton had no concern with the more intellectual approach that characterized the nation’s better universities. In the late 1960s Donald Trump, after transferring from Fordham, received a bachelor’s degree from Wharton’s small real estate department.

What strikes one about Trump’s biography is that neither in college nor later in his life has he evidenced any interest in the humanities or liberal arts. Literature, history, philosophy, the arts, and any interest in foreign cultures have remained alien to him. Historian Douglas Brinkley has written of Theodore Roosevelt’s “mighty strong Thoreaurian ‘back to nature’ aesthetic strain” and Franklin Roosevelt’s equally strong love of nature. In Trump, we see no similar appreciation of nature, no aesthetic love of beauty. Such qualities are foreign to his crass nature.

To him college was primarily about vocational training, a preference that Hofstadter believed became more prevalent in the late nineteenth and early twentieth centuries. This emphasis on the vocational was part of a growing emphasis on the practical—"On two matters there was almost no disagreement: education should be more 'practical'; and higher education, at least as it was conceived in the old-time American classical college, was useless as a background for business.”

In writing of the popularity of self-help books, Hofstadter cites Protestant minister Norman Vincent Peale’s words, “Christianity is entirely practical.” The historian writes of the “confusion of religion and self-advancement” by such ministers, and he also criticizes Bruce Barton’s 1925-26 best-seller, The Man Nobody Knows, which stated that Jesus was a great business executive, “the founder of modern business,” and that his parables were “the most powerful advertisements of all time.”

Although Trump has never evidenced much of an ethical concern, he has expressed a fondness for Peale’s self-help religion. In 1977 Peale officiated at the first of Trump’s three weddings. Peale also “predicted the real estate developer would become ‘the greatest builder of our time.’ ” Trump, in turn, considered the minister an important mentor, who taught him “to win by thinking only of the best outcomes.”

In the beginning pages of Anti-Intellectualism in American Life, Hofstadter alludes to the anti-intellectualism, but not the crassness, of Senator Joseph McCarthy. But crass the Wisconsin senator certainly was. His crassness was well identified by chief counsel Joseph Welch during the Army-McCarthy Hearings of June 1954 when he asked McCarthy, “Have you no sense of decency, sir, at long last? Have you left no sense of decency?”

In 2016 billionaire Warren Buffet mentioned Welch’s remarks after Trump had ridiculed the parents of Humayun Khan, a Muslim-American U.S. army captain killed in Iraq. Buffet repeated Welch’s words, asking of Trump, “have you no sense of decency, sir?”

Also in 2016, an article on the respected Hill website offered an extensive comparison of McCarthy and Trump. It cited many examples of Trump’s crassness including the mocking of a handicapped reporter, and stated that “Trump has raised misogynistic references to a crass art form.”

Trump Revealed devotes a whole chapter to the influence on Trump of McCarthy’s chief aide during his anti-Communist witch-hunt days—lawyer Roy Cohn. After meeting him in 1973, Trump adopted his style of dealing with enemies and critics: “When attacked, counterattack with overwhelming force.” Cohn often acted as Trump’s lawyer, sometimes using disreputable tactics. In 1986, “his unethical behavior as a lawyer caught up to him. The Appellate Division of the New York State Supreme Court accused him of ‘dishonesty, fraud, deceit and misrepresentation,’ ” and he was disbarred.

Growing up in a blue-collar family that had supported FDR and Truman, I remember well that my family and our blue-collar friends shared the broader disdain that many Americans felt for “the egghead” Stevenson, as opposed to the Republican candidate, the more down-to-earth Dwight Eisenhower. One of the favorite refrains in our blue-collar milieu about men like Stevenson and other “eggheads” was that they never got their hands dirty.

In 2016 Trump benefitted from a deep strain in the American character. It was influenced by our frontier experience and contempt for the “tenderfoot,” by the spread of Jacksonian democracy and populism, by the free-wheeling capitalism of the Gilded Age, by our respect for practical men like Thomas Edison, Henry Ford, and Charles Lindberg, for common sense and “the school of hard knocks” as opposed to book-learning and being “overly educated.”

This strain was American anti-intellectualism, which has increased in recent years. And by undervaluing formal education, refinement, delicacy, decency, and sensitivity, by considering them unnecessary for “real men,” it made crass behavior more acceptable. In addition such conduct has become more common as a result of the popularity in recent decades of TV shows like The Jerry Springer Show and reality shows like Keeping Up with the Kardashians and Trump’s The Apprentice, where he repeatedly bellowed out, “your’re fired.” The in-your-face confrontational style of right-wing celebrities such as Rush Limbaugh and Bill O’Reilly have also contributed to a coarsening of our culture. Unfortunately, the crassness and anti-intellectualism of President Trump are not aberrations in our culture, but a reflection of our darker side.