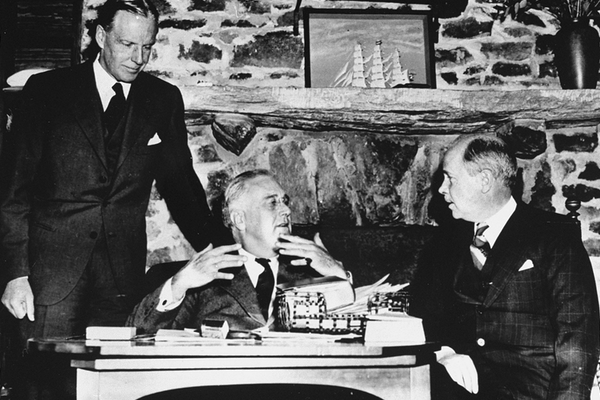 The six-hour documentary film on the U.S. and the Holocaust produced by Ken Burns, Lynn Novick, and Sarah Botstein has many merits.  It vividly portrays and personalizes the horrors and inhumanity of the Nazi murder machine, examines the diversity of responses within the United States, and highlights State Department’s resistance to allowing more Jewish refugees into the country.  Inspired by an exhibition of the U.S. Holocaust Memorial Museum, the film reflects the museum’s extraordinary cache of recorded interviews and resources.

Most importantly, it teaches the right lessons.  When asked what she hoped people would gain from viewing the film, Botstein, the child of Jewish refugees on her father’s side, said, “I hope they learn something and have conversations about their role in a democratic society and their responsibilities to fellow human beings.  To be kind to your neighbor, to think about what you would do and what you should do when things get hard and complicated.  How can we work together?”

Yet I also agree with critic Martin Ostrow, the director of a previous PBS film on America’s response to the Holocaust aired in 1994, that Burns and company treated President Franklin D. Roosevelt with kid gloves.  “It's a shame,” wrote Ostrow, “the series brings nothing new to understanding Roosevelt’s troubling decisions and motivations.”

To understand the Roosevelt administration’s motivations and actions – or non-actions – one has to examine the U.S. and British policy of appeasement toward fascist states during the 1920s and 1930s.  This larger story has been explored by a number of scholars, including Arnold Offner in American Appeasement: United States Foreign Policy and Germany, 1933-1938 (1969), David Schmitz in Thank God They’re on Our Side: The United States and Right-Wing Dictatorship, 1921-1963 (1999), Jacques Pauwels in Big Business and Hitler (2017), and Jonathan Haslam, The Spectre of War: International Communism and the Origins of World War II (2021).

Essentially, the policy of appeasement was based on the view that communism constituted a mortal threat to Western society, whereas fascism was acceptable, if not a positive antidote to communism.  Indeed, when Benito Mussolini came to power in Italy in 1922, U.S. officials welcomed his National Fascist Party as a force for stability and a bulwark against Bolshevism (communism).  “In developing American policy,” writes Schmitz, “officials in Washington were mainly influenced by Mussolini’s establishment of a stable, noncommunist government that welcomed American trade and investments.”  This view, in turn, “allowed American officials to ignore Mussolini’s brutal repression of all opposition groups, destruction of Italy’s constitutional government, and rule by violence.”

Conservative British leader Winston Churchill was of a similar mind.  Following a meeting with Mussolini in Rome in January 1927, Churchill praised the dictator at a press conference, saying, “If I had been an Italian, I am sure that I should have been whole-heartedly with you from start to finish in your triumphant struggle against the bestial appetites and passions of Leninism.”

Mussolini provided the role model for Adolf Hitler’s rise to power in Germany.  Upon Hitler’s appointment as Chancellor in January 1933, the American ambassador to Germany, Frederic Sackett, wrote, “From the standpoint of stable political conditions, it is perhaps well that Hitler is now in a position to wield unprecedented power.”

In 1937, after more than four years of Nazi dictatorial rule and anti-Jewish policies and propaganda, the U.S. State Department continued to maintain that fascist-type governments were compatible with U.S. interests, free trade, and the international order.  A February 1937 report written by the department’s European Division defined fascism as a respectable movement of the propertied classes aimed at defending the existing order and private property against Bolshevism.  Where fascism was in power, the authors judged that “it must succeed or the masses, this time reinforced by the disillusioned middle classes, will again turn to the Left.”  The goal of the United States, as such, was to ensure that Germany would recover economically.  Should the economy falter, they warned, “war is possible, if not probable.”

Some members of the U.S. diplomatic corps pushed in the opposite direction.  Most prescient was George Messersmith.  He had been in the Foreign Service since 1914 and served as the consul general in Berlin from 1930 to April 1934 before becoming minister to Austria.  In March 1934, he strongly advised that the U.S. not renew the major trade agreement with Germany, the Treaty of Friendship, Commerce, and Consular Rights, ratified in 1925, which was due to expire in 1935.

Messersmith argued that the treaty would only spur German rearmament.  He pointed out that the long-range “mail planes” recently purchased by Germany were “easily convertible to bombers.”  Contrary to Secretary of State Cordell Hull’s benefic view of international trade, he wrote in May 1934 that “a government with really peaceable intentions does not produce armaments, train its people in military exercises, and create such an extraordinary spirit in the schools, even among the very young.”  Rather than build up the German economy, Messersmith hoped that economic instability would bring down the Hitler regime.

Disregarding Messersmith’s pleas, a special State Department committee recommended approval of the trade treaty, noting that trade warfare would mean the loss of nearly one billion dollars in American investments.  The U.S. and Germany renewed the treaty in June 1935, which in turn enabled U.S. corporations to trade and invest in Germany without restriction.  Messersmith lamented in 1936 that American firms were allowing their capital to be “used for the maintenance of the German industrial program and in some important directions for German rearmament, which is obviously not intended for defensive but for aggressive measures.”  American business leaders, he added, “are not blind to all of this.”

U.S. business investments in Germany were substantial when Hitler took over in 1933, and continued to grow thereafter.  “Perhaps the Germans could have assembled vehicles and airplanes without American assistance,” writes Pauwels.  “But Germany desperately lacked strategic raw materials, such as rubber and oil, which were needed to fight a war predicated on mobility and speed.  American corporations came to the rescue.”

As Nazi repression and militarization proceeded, U.S. corporate leaders faced the choice of whether to continue their operations in Germany or pull up stakes and take a financial loss.  Virtually all remained.  The reigning philosophy in Corporate America was expressed by Alfred Sloan, Jr., chairman of the General Motors board of directors, in a letter to a stockholder in April 1939:  “According to my belief . . . an international business operating throughout the world should conduct its operations in strictly business terms, without regard to the political beliefs of its management, or the political beliefs of the country in which it is operating.”

Ambassador William Dodd in Berlin criticized this economic appeasement.  He wrote to President Roosevelt on October 19, 1936:  “At the present moment more than a hundred American corporations have subsidiaries here or cooperative understandings.  The DuPonts have three allies in Germany that are aiding in the armaments business.  Their chief ally is the I. G. Farben Company, a part of the Government which gives 200,000 marks a year to one propaganda operation on American opinion.”  Dodd also noted the investments of Standard Oil, International Harvester, and General Motors in German rearmament.

Another mark of appeasement was Roosevelt’s appointment of Hugh R. Wilson to replace Dodd.  Ambassador Dodd had been a thorn in the side of the Nazi regime, avoiding Nazi celebratory events and beseeching the Roosevelt administration to protest Germany’s remilitarization of the Rhineland in March 1936, albeit to no avail.  Wilson, during his first meeting with Hitler on March 3, 1938, complimented the dictator as “a man who had pulled his people from moral and economic despair into the state of pride and evident prosperity which they now enjoyed,” according to his own account.  Eight days after the meeting, German troops marched into Austria.

U.S. diplomatic and economic appeasement carried over into the muted U.S. responses to Jewish repression as well as the establishment of strict immigration quotas.  On June 16, 1933, Roosevelt effectively established his administration’s policy with respect to Jewish persecution in Germany in a missive to Dodd in Berlin:  “The German authorities are treating Jews shamefully and the Jews in this country are greatly excited.  But this is also not a government affair.  We can do nothing except for American citizens who happen to be made victims.  We must protect them, and whatever we can do to moderate the general persecution by unofficial and personal influence ought to be done.”

Roosevelt began to have second thoughts about the policy of appeasement in 1937.  In February, he questioned a State Department report which concluded that “economic appeasement should prove to be the surest route to world peace.”  In May, he wrote in a letter to William Phillips, ambassador to Italy, saying that the “more I study the situation, the more I am convinced that an economic approach to peace is a pretty weak reed for Europe to lean on.  It may postpone war but how can it avert war in the long run if the armament process [in Germany] continues at its present pace – or even at a slower pace?”

The U.S. and Great Britain abandoned the policy of appeasement only after Germany invaded Czechoslovakia in March 1939.  Thereafter the policy became anathema.  During the war, the U.S. aligned with the communist Soviet Union and fought against Germany and Italy, thus reversing its prewar orientation.  The foreign policy establishment, meanwhile, blamed its abandoned appeasement policy on the antiwar movement rather than its own anti-communist vendetta – which it revived after the war.

“During the Second World War, millions of Americans fought and sacrificed to defeat fascism,” writes Lynn Novick, “but even after we began to understand the scope and scale of what was happening to the Jewish people of Europe, our response was inadequate and deeply flawed.”

Indeed, it was inadequate in a number of dimensions.  The Roosevelt administration could have prevented U.S. corporations from aiding the Nazi state, particularly in rearmament.  It could have united with the Soviet Union early on in opposing German expansionism.  It could have spoken out strongly against Germany’s human rights abuses and opened the doors of immigration wider, even on a temporary basis, fulfilling the promise set in the bronze base of the Statue of Liberty, written by Jewish immigration activist Emma Lazarus in 1883, “Give me your tired, your poor, Your huddled masses yearning to breathe free.”