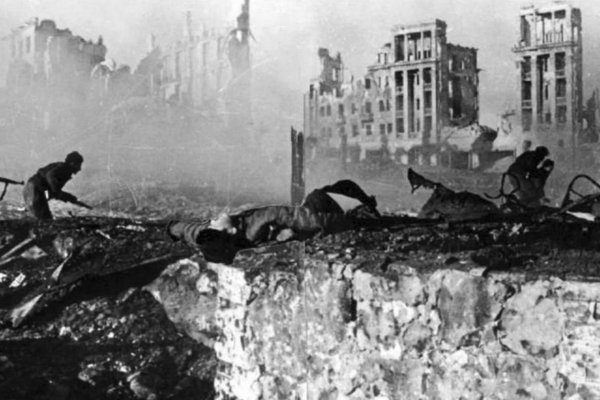 In one of the ironies of history, while Russian President Vladimir Putin keeps calling the Ukrainian leadership “Nazis,” it is his own flawed military strategy that closely matches that of Hitler in the disastrous invasion of Russia in 1941.

Here are five mistakes in military strategy that both Putin and Hitler made:

● Their decision-making was based on an ignorant, paranoid worldview in which both believed their nations were purposely being made into “slave states” by a hostile West.

●Based upon a combination of poor intelligence and wishful thinking, they both assumed their armies could quickly punch through a weak, disorganized enemy army and force surrender.

● Both dictators surrounded themselves with yes-men and obsequious generals who lacked critical thinking and only told their bosses what they wanted to hear.

● They both believed that the United States lacked the will to fight, and if did get involved, its forces (or weapons) would arrive too little or too late to make a difference.

Both Hitler and Putin shared a bitter, grievance-filled outlook based on the belief that their nation was being deliberately encircled and weakened by “hegemonic” western nations. They both based their diplomatic and military strategy on the principle that they must be allowed to expand and that western nations (or “Anglo-Saxon nations”) should retreat and accept a “new reality.”

He blamed Germany’s defeat (in WW I) on a conspiracy between the British, the Americans and Jewish plutocracy…In his view, the Germans had subsequently been (economically strangled) and reduced to the status of “slaves” on a plantation.

In a September 30 speech at the Kremlin, Putin accused the U.S. and NATO of creating a “neocolonial system” aimed specifically at destroying Russia. He railed against the “undisguised malice of these Western elites toward Russia,” caused by his nation’s refusal to be “robbed during the period of colonial conquest.”

In making the decision to launch a massive invasion of a neighboring country, both Hitler and Putin relied on faulty intelligence. In both cases, they had shaped their intelligence services to tell them what they wanted to hear and eliminated any independent voices who would question their judgement.

Hitler predicted his invasion of Russia,  Operation Barbarossa, would take no longer than four months. He told his confidants that the Russian people were racially inferior and the communist leadership inept. He assured his inner circle that "you only have to kick in the door and the whole rotten structure will come crashing down!"

Hitler’s fantasy that Stalin’s army would be a pushover was shared by the German military leadership. In 1941, it distributed a “Handbook on the Military Forces of the USSR” that assured soldiers the Red Army was “unsuited for modern warfare and incapable of decisive resistance.”

Putin’s belief, which his intelligence services endorsed, was that Ukraine’s leadership was weak and would flee Kyiv once Russian tanks drew near. He also publicly proclaimed that the Ukrainian people wanted to be part of Russia and would welcome his invasion forces.

Arun Iyer, a senior fellow at the Scowcroft Center for Strategy,  noted in a recent report that “Russia’s intelligence apparatus miscalculated both the resolve and capability (of Ukraine) as well as the level of support from the international community.”

Both Hitler and Putin insisted on personally directing the military strategy for the invasion and appointed “yes men” as army chiefs to carry out their plans.

When Hitler launched his invasion of Russia in June 1942, the German Army was commanded by General Wilhelm Keitel, a man selected for his willingness to carry out the Fuhrer’s orders without question. Other generals distrusted him and called him “Lakeitel” a pun derived from lakai ("lackey" in German).

Sergei Shoigu, who has no military experience, was appointed Minister of Defense by Putin in 2012. The son of a Communist Party boss in a distant Soviet region, he had a low-level government job under Boris Yeltsin. He gained Putin’s trust and soon became a close friend, even going on vacations with him.

Hitler and Putin both viewed the democracies in the U.S. and Europe as inherently weaker than their authoritarian regimes.

According to Timothy Snyder, a Yale history professor and author of the books On Tyranny and Bloodlands, Putin and other dictators generally believe that democracies are inherently weak: “Authoritarian regimes look efficient and attractive because they can make rapid decisions. But they often make rapid bad decisions.”

Snyder added that “Trump’s attempt to overthrow the election on Jan. 6, 2021, made the American system look fragile.”  By invading Ukraine, Putin thought he would “make Biden look weak.”

In Blood and Ruins, historian Richard Overy notes that Hitler held “derogatory views of the capacity or willingness of the U.S. to wage a major war given its military unpreparedness” in 1940 and its “long history of isolationism.”  At one point Hitler declared that American officers would crumble in battle because they were “merely businessmen in uniform, not real soldiers.”

Putin, according to U.S. Air Forces Secretary Frank Kendall, made a similar mistake. Kendall said the dictator “overestimated the capacity of his own military” while he “severely underestimated the global reaction the invasion of Ukraine would provoke,” as well as the “will and courage of the people of Ukraine.”

How will the war end?

Hitler’s Operation Barbarossa lasted four years, cost at least 20 million dead (civilian and military), and only ended when the Red Army captured Berlin and came within blocks of the Fuhrer’s Bunker.

Why did Hitler fight until the bitter end when virtually all of his remaining defense staff told him defeat was inevitable?

Hitler insisted that “history teaches us that all coalitions break up, but you must await the moment... we shall carry on this struggle until, as Frederick the Great said, ‘one of our damned enemies gives up in despair’.”

Hitler believed President Franklin Roosevelt was controlled by the “Jewish plutocracy.” When FDR died suddenly on April 12, 1945, Hitler celebrated in his bunker, claiming that now the U.S. would sue for peace. But President Harry Truman quickly assured the nation that he would proceed at “full speed” to win the war.

Many experts believe that Putin is stretching the war out–hoping, like Hitler–that the U.S. and European coalition will collapse and Ukraine will be forced to sue for peace.

This too is probably the fantasy of an isolated dictator. Rafael Behr, a columnist on European affairs for The Guardian newspaper, observed,

Dictators underestimate the strength of democracies because they see only weakness in leaders who submit themselves to the risk of regime change in free elections. They see robust opposition and free press as vulnerabilities to the system, making it harder to control from the top. They do not realize that those are the qualities behind the resilience and adaptability that have made liberal democracy the most successful model for organizing society in the history of human civilization.

So far, the democracies are winning. We can only hope it stays that way.