We Are All Americans Here: The Crisis of Civic Empathy and our Besieged Democracy

Chris J. Magoc is Professor of History at Mercyhurst University in Erie, Pennsylvania and the author of A Progressive History of American Democracy Since 1945: American Dreams, Hard Realities (Routledge Press, 2022), from which this essay is adapted. 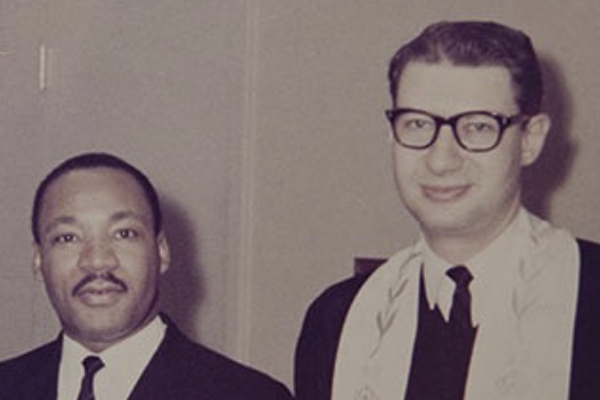 One week before Christmas 1944, the 422nd Regiment of the 106th Infantry Division of the U.S. Army was captured during the Battle of the Bulge, the final German offensive of the Second World War. The soldiers soon found themselves among 1,292 American POWs at Stalag IX-A near Ziegenhain, Germany. Among their ranks were more than 200 anxious Jewish soldiers, keenly aware that with defeat approaching, the Nazis’ extermination of Jewish POWs was accelerating. On January 27, 1945, the camp’s highest-ranking American officer, Master Sergeant Roddie Edmonds of the 422nd, received an order from the camp commandant, Major Siegmann: “Tomorrow morning at roll call all Jewish Americans must assemble—only the Jews—no one else. All who disobey this order will be shot.” “We’re not doing that,” Edmonds told his men. The word went down the line for the men to fall out—Americans with names like McCoy and Smith would stand alongside their Jewish comrades. “Raus! Raus!” came the order at 0600. With all 1,292 Americans in formation, Siegmann approached Edmonds. “Were my orders not clear, Sergeant?” Edmonds was a stoic, well-respected Tennessean who as Paul Stern recalled, had “probably never met a Jew in his life.”  “Only the Jews!” the major yelled. “They cannot all be Jews.” “We are all Jews here,” replied Edmonds. Siegmann pointed his Luger at Edmonds’s head, “Sergeant, one last chance.” “Major,” Edmonds coolly replied, “you can shoot me, but you’ll have to kill all of us.” Siegmann lowered his pistol. Roddie Edmonds never spoke of the incident, but for the men of Stalag IX-A, he stood forever as a “shining example,” as Stern put it, “for all of us to remember and try to emulate in our own lives.”

Beyond its profound illumination of moral courage, the Roddie Edmonds story exemplifies the righteous, democratic future that millions of Americans believed they were fighting and sacrificing for in World War II. The exalted hope that a more just society could emerge through the crucible of a war against fascism was palpable on the home front, grounded in a spirit of civic empathy—what the ancient Greeks called agape. The highest form of human love, agape is selfless, and it is brave—“love in action,” Dr. Martin Luther King Jr. later termed it, "a love in which the individual seeks not his own good,” but the greater good. Its supreme policy embodiment was President Franklin Roosevelt’s “Economic (or “Second”) Bill of Rights,” proposed in 1944. Envisioning postwar guarantees of full employment, veterans’ benefits, universal education and medical care, FDR’s proposal—widely hailed at home and around the globe—aimed at forging a strong social democracy that more broadly could stand as a bulwark against the reemergence of illiberal authoritarianism.

Although postwar political life was characterized mostly by conservative stasis that doomed such egalitarian liberalism, agape lived on as the radiant heart of the civil rights movement. One of its most dramatic expressions came in 1964 in St. Augustine, Florida. In the face of violent Klan resistance to integration that spring and a U.S. Senate filibuster of landmark civil rights legislation, Dr. King appealed to long-time compatriot Rabbi Israel Dresner, to “send as many rabbis as you can.” On June 18, Dresner soon led 16 Jewish clerics in a motel “pray-in” at the segregated Monson Motor Lodge, resulting in the largest mass arrest of rabbis in American history. “We came as Jews who remember the millions of faceless people who stood quietly,” they declared, “watching the smoke rise from Hitler’s crematoria.”  Following a final action, a dramatic “swim-in” that afternoon at the Monson swimming pool by other activists, the Senate voted for the Civil Rights Act the next day, 73-27.

Four years later, Senator Robert F. Kennedy’s run for the presidency offered an inspired 84-day clinic in civic empathy. Wherever he went—from West Virginia coal country to forsaken Native American reservations, urban ghettoes, and barrios of the Southwest—Kennedy bound himself to the struggles of working people. Running at one of the most turbulent, divided moments in our history, Kennedy frequently reminded Americans that they yet shared “a common concern for each other.” Still, he was unafraid to challenge them. Speaking to a local service club one night in Vincennes, Indiana, Kennedy strayed from his text and the issue most of the men wanted to hear about: the need for more law and order. Instead, as journalist Thomas Congdon, Jr. summarized:

[With] big, heavy men . . . still occupied in shoveling in their lunch—the Senator from  New York spoke of children starving, of “American children, starving in America.” It was reverse demagoguery—he was telling them precisely the opposite of what they wanted to hear. “Do you know,” he asked, voice rising, “there are more rats than people in New York City?” Now this struck the club members as an apt metaphor for what they had always believed about New York City, and a number of them guffawed.  Kennedy went grim, and with terrible deliberateness said, “Don’t … laugh” . . .There were a few more hushed questions, and finally he escaped to confused applause.

With naked vulnerability amid a very dark time, Kennedy appealed to Americans’ better angels. Coming on the heels of Dr. King’s murder, RFK’s assassination that dark June night slammed the door on an era that had begun with boundless, hopeful possibilities. The spring of 1968 glowers at us still—a decisive moment when a society that had faintly yearned for a more generous, agapic future began surrendering to cynicism.

The forces that set us on a course for Trumpism a half century later are complex. So are the reasons for the appalling truth that millions of our fellow citizens maintain support for an authoritarian sociopath whose galaxy of transgressions include mocking a disabled reporter, bragging of sexual predation, uttering more than 30,000 lies or misleading statements as president, describing neo-Nazis as “very fine people,” and summoning insurrectionists to Washington on January 6, 2021 to overturn our democracy. Many of us live in a state of grief that this could really be happening to the nation defended by our parents and grandparents.

Our current crisis runs deep. It is manifested in, but also transcends, antidemocratic state voting laws, the filibuster, gerrymandering, the epistemological wonderland of social media, and the metastasizing of far-right extremism among white Americans who would have us live under white minoritarian autocracy than together in a multiracial democracy. Its unholy, cynical depravity was most recently laid bare by Republican demands to “harden” our schools—a revealing term for our times if ever there was one— following mass shootings of third graders and black grocery shoppers.

On June 11, 1963, in the midst of a crisis that saw firehoses and dogs sicced on black children in the streets of Birmingham, Alabama, President John F. Kennedy beseeched Americans to see civil rights as a "moral issue ... as old as the scriptures and as clear as the Constitution."  Nearly sixty years later, the matter of racial injustice that JFK identified as a spiritual matter persists, now entangled with the existential crisis of democracy.  As then, what we need most is a rediscovery of our shared humanity and the divine truth that we are all Americans here.