California Isn't a Liberal Sanctuary where Asian Americans are Concerned

Hao Huang is a professor of music and the Bessie and Cecil Frankel Endowed Chair in Music at Scripps College. His play Jianchi/Perseverance, which explores the dark history of Asian Americans in California, will be released May 15, 2022. 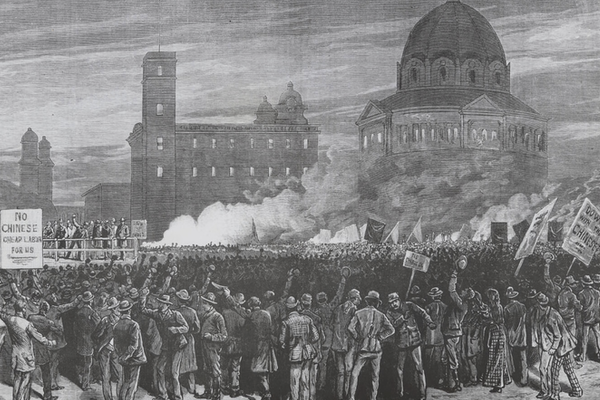 As we celebrate Asian American and Pacific Islander Heritage Month this May, it’s important to consider why examining the history of anti-Chinese violence is important to people outside the AAPI communities. Current dialogues about race in the U.S. often minimize Asian experiences with racism as unfortunate incidents involving a successful model minority that does not need “extra” attention or assistance. One state in particular—California—has often been portrayed by public media as a liberal sanctuary, often held up as a model for the rest of the U.S., when it is certainly not the case.

In 2020, hate crimes against Asians in California more than doubled; the most common type of anti-Asian hate crime reported was violent crime, with 72 reports in 2020, up from 32 in 2019. This included an assault that left a 76-year-old Asian American grandmother with two black eyes, the death of a 75-year-old man after a robbery in Oakland, and the June 2021 stabbing of a 94-year-old San Francisco woman. Two years later in January 2022, the San Francisco police department reported that hate crime incidents involving anti-Asian bias had jumped from nine in 2020 to 60 in 2021, a 567% increase.

In his campaign for re-election in 1852, California Governor John Bigler urged fellow citizens to "check this tide of Asiatic immigration," claiming that the Chinese were incapable of becoming American. He baldly asserted that due to racial and cultural reasons, they could not assimilate. That same year, merchant Norman Asing responded thusly, “so far as the history of our race in California goes, it stamps with the test of truth the fact that we are not the degraded race you would make us.”  Unmoved, 10 years later in January 1862, Governor Stanford (founder of Stanford University) stated: “To my mind it is clear, that the settlement among us of an inferior race is to be discouraged by every legitimate means.” What does the term “legitimate means” mean?

California history includes massacres, riots, expulsions and other violent actions that were directed at Chinese-American communities during the mid and late 19th century. In the 1880s alone, Chinese communities were attacked in 34 towns in California, subsequent to the 1871 LA Chinatown massacre of 20 Chinese in one night. Less than a decade later, the San Francisco anti-Chinese 3 day pogrom took place in 1877 where Chinatown was burned to the ground, followed by killings in Chico, Weaverville and Yreka; still later, in 1885-1886 Chinese were expelled from Arroyo Grande, Marysville, Merced, Nicolaus, Pasadena, Redding, Red Bluff, Riverside, Truckee and Tulare, where local Chinatowns were razed.

Clearly, anti-Asian American hate has not abated in the U.S. since the ratification of the 1882 Chinese Exclusion Act, the only federal act targeting a specific nationality by race.  Discrimination has not been limited to Chinese.  During WWII, the first Japanese internment camp was opened in Manzanar in 1942, located in southern California.  No other nationalities were targeted. A total of 11,070 Japanese Americans were processed, and nearly two-thirds of all internees at Manzanar were American citizens by birth. During the 1992 LA riots, 2,280 Korean American-owned stores were looted, burned or damaged; nearly half a billion dollars of damage was sustained by Korean-owned businesses. Koreatown became a war-zone, with no police coming to help. Last year in March 2021, a white man disrupted a protest against anti-Asian racism in Diamond Bar, California, by driving through a group of protesters while yelling, “F — China!”  John Lee, a Korean American city councilman who currently represents a district in the San Fernando Valley, shares a common refrain about the Asian American experience, that it is to “perpetually feel like an outsider.” Certain aspects of “the American Dream” manifestly have not applied to Asian Americans.

“We cannot allow this effort to die down,” Lee said of the Asian community’s work to highlight anti-Asian violence. “We cannot and will not be silent any longer.”

It’s particularly instructive to uphold the mythology of California's liberal tolerance.  Its history and contemporary politics belie that stereotype. After all, in June 2021, a report from the California state attorney general noted that attacks against Asians rose by 107% the previous year. The total number of hate crimes in California in 2020 was the highest in more than a decade, 1,330. One in three anti-Asian hate crimes took place in Los Angeles County. These are merely the latest in the long list of violence and discrimination against Asians throughout the state’s history.  Surely, California cannot be held up as an unblemished paragon of tolerance and peaceful inclusion. During the COVID pandemic, it’s become obvious that self-evident truths of American democracy have been under attack: equality, unalienable Rights such as Life, Liberty and the pursuit of Happiness. In the Golden State, attacks on these values have been specifically directed towards Asian Americans for over a century and a half.